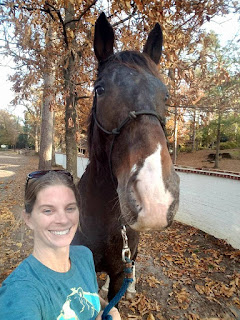 I turned him out this morning for an hour or two while I ran some errands before we left for Aiken. And as soon as I turned him out it started drizzling heavily. Sigh.... He rolled.. both sides.. and was filthy. But I figured I'd groom him when I got there because now he was just all slimy. And I knew he needed some outside time before he stood in the trailer. Unfortunately while I had plenty of time and was early, I decided I wanted food and in an effort to get BACK to the McDonalds I passed in hopes of finding better (I didn't), I spent too much time trying to avoid scary sharp turns and narrow roads and we pulled into our appointment with only a minute to spare. He was FILTHY! I was literally currying clods of mud off every inch of him. I was in a cloud of mud dust when they came out to get me. Oops.

Anyways, he trotted great and looked even and tracking up evenly. Then we did the teeniest of neuro tests and he did fine with the hilly uneven terrain. He was a bit weak to the tail pull still, but again, it's hard to say with the reserpine and the time off. Then we did his ultrasound. I was a bit mortified as they had to scrub him 3 times to get him clean enough to ultrasound. Oops. But GREAT NEWS!!! His injuries all looked beautiful and almost completely healed (at least to my eye). Dr. Gillis was even impressed with how organized some of the fibers were looking already. :) Yay!

So we got the all clear to start trotting!!!! Granted, it's only 5 minutes to start, but we get to build up to 20 minutes total. And he still has to stay in the round pen and his stall, but... it's still trotting!!!! We'll work up to the 20 minutes and recheck him again in 8 weeks. Which will be right after my birthday! I'm hoping that he will then be cleared to canter, and then 8 weeks after that, cleared to start jumping. Which still puts us at April, but... still. We can trot!!! 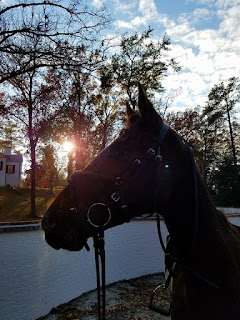 Since I was already in Aiken and I had to go adjust Rusty but needed to give her a bit more time to get off work, I decided to head to Hitchcock Woods to do our ride. And I'm so glad we did. It was so much fun. I really ought to make an effort to do that more often. 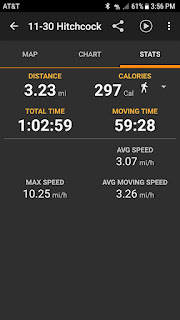 I parked on the street because I wasn't brave enough to try to get my trailer into some of those places. And Dan stood tied to the trailer on the curb side (not the road side) and just chilled while cars were whizzing by. Then we walked across the street and headed to the woods. He was pretty brave despite some noises in the woods and dogs and a golfcart. Though he was a little spooky at the  storm sewers. :) We had a great time though. It's so peaceful and beautiful there, with a bit of a .... I don't know.. nostalgic feel... You can almost feel the hounds and the hunt horses going through there even when it's quiet. Dan was good for his trot and... actually a bit out of shape I think despite our long walks. 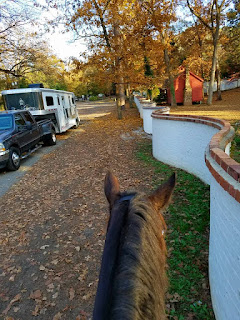 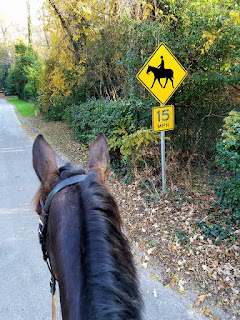 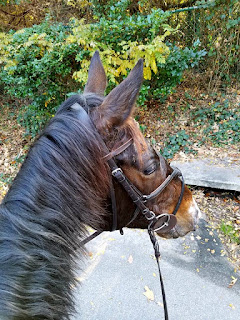 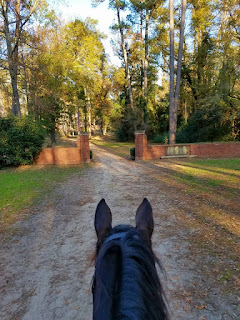 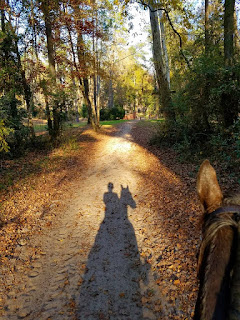 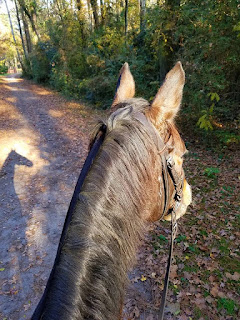 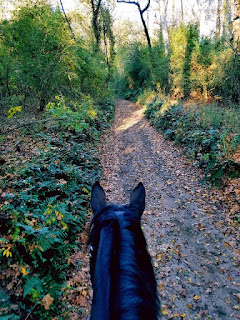 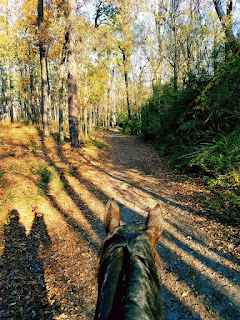 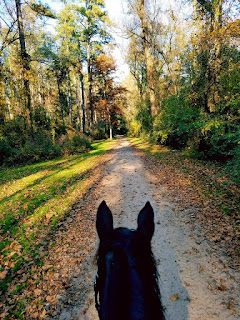 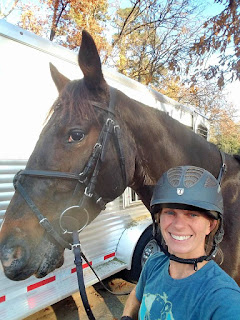 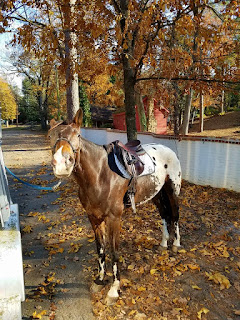