Ooooh, I love this guy!

Danny is such a good baby!!! I am so lucky!!! So, I put his halter on him... and doh! I'm going to need a new one! He is definitely about to outgrow his "arabian" halter. 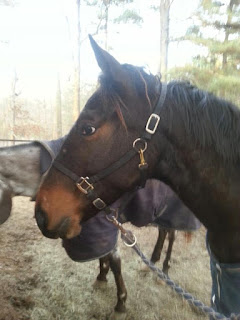 I groomed him and then put on his surcingle and cavesson and into the round pen we went. We worked on basic lunging... walk to trot to walk to halt commands. He was great. We even started on his hard side (the right). Then we did the walking straight thing and he did well with that too. Then the other side. Also great. Well.. now what?! I ran both lines through his surcingles and stood behind him. I clucked and said "walk on" and eventually got him to take a few steps forward and he turned both ways. But he was confused. You could tell he was thinking "Um... you're supposed to be in the middle...with me going around you!". So then I decided I would go back to being by his side and let the outside line drag. That went a little smoother and we even tried trotting!!! He did pretty darn good. He also is much better about the squared shoulders meaning halt today. Lots of praise and pats and then we headed back up to the barn. 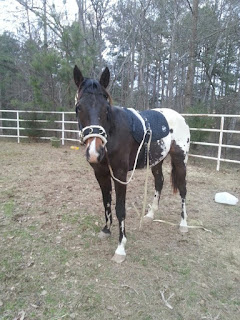 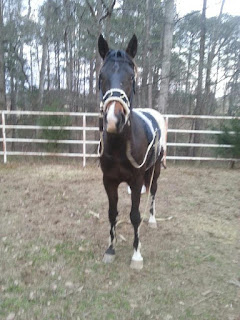 I clipped Flecks muzzle and then let Dan see the clippers again. He's always had a hang up with them. He's fine with them all over the place, but still twitchy when they get near his forelock, as long as they are turned off. Once I turn them on, he gets much twitchier. But he was pretty good today. He even tried to eat them! ha! I was even able to clip most of his muzzle and put them near his forelock and bridle path. Yay.

Such a smarty pants!! I cannot wait to ride him!!!

Oh, and yesterday we burned the leaves in the back yard. I put Dan and Roany in the round pen... not realizing how quickly it would go! It was rather smoky for them. :( Oops. I turned them back out in the front field later, but they spent a few hours there. So now Dan is smoke proof too. :) He didn't care one bit. 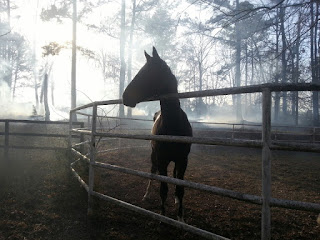 So.... yesterday we did more round pen work and he was pretty good. He's starting to figure out the whole walk forward vs walk in a circle. But I can't quite figure out what to do when he starts to go faster! Must remember to ask Beth about that. He did quite a few bolts though... Naughty boy! The chickens were playing in the woods and being quite spooky, but still. Then we also did some trotting in hand and he's much more gentlemanly than last year. ;) 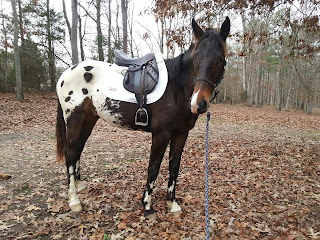 Today I groomed him (though with all this warm weather and rain, he is FILTHY!) and then put Fleck's jump saddle on him. With a pad and a fleecy pad.. just like Fleck. I girthed it up... with Flecks girth... And it fit! Mostly.. I mean, it wasn't tight enough to ride in, but it was tight enough that it didn't slide around without any weight in it and there was no gaps or hanging. And it was on the same hole that it's on with Fleck!!!! Egads!!! Now granted... Fleck's is tight enough to ride in, but Danny wasn't too far off. But he didn't mind it. We even did a teeny bit of lunging and walking around and he didn't care. Then I dropped the stirrups and flapped them around...and he didn't care. Then we trotted in hand with the stirrups down and he didn't care. :) Such a good kid..... 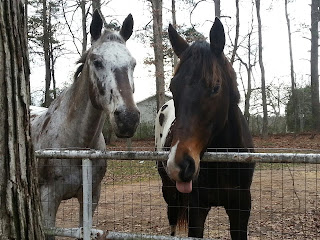 More School! And SUCH a good boy.. mostly

A very exciting day! Christina and I took our babies and the big boys to Ashland for double lessons with Beth. Christina went first with May. Then it was my turn with Dan. He was sooo good!! At first. Ha! But seriously.. he was really good. Beth was quite impressed. We showed off our longing skills and then worked on the start of long lining. We did a circle, then I moved slightly towards his shoulder, but not in front, and led him to walk in a straight line. He was good at it. When I fell back to his middle, he was to go back in a circle. And he was getting it. And Beth was impressed that when I squared my shoulders at him, he stopped and turned in. He was also good about licking and chewing. So then Beth was working with him and a truck appeared on the horizon. DANGER DANGER!!!! hee hee... But he went on high alert and then he lost his brain. He started to get fast and when Beth went to reel him in.. he took off. Only he didn't just take off... or run.. He's a sneaky little turd! He played the line and when he knew he could, he yanked free. Naughty!!! He ran back to the trailer and we caught him and put him back to work. And he did it again! So then Beth put a different longe line on him as mine was a little slick. And he was put to work. He behaved pretty well after that. Then she pushed the envelope a little and was holding the whip near his face and wiggling it the tiniest bit. This was to be the "inside leg" aid... to teach him to move out. In other words.. when we are walking in a straight line and he starts to fall in..the whip moved towards his face means move back out. It's not something to spook at and it doesn't mean Go. Very much like the inside leg doesn't mean go forward.. it means go sideways. Well, he wasn't really afraid of it, but he got a little hot. But then he settled down and was good. So then it was my turn again and we were doing it right :) Yay! Oh, and Beth said that during the lessons, if he went into the trot.. that was okay. As long as it was a polite trot. She said he was figuring things out and he was confused..perhaps going forward was the answer. It wasn't what we were asking, but since he was thinking... we don't punish that. Again, he had to be polite though. No bolting obviously. 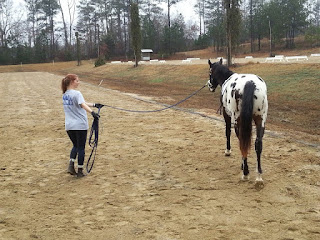 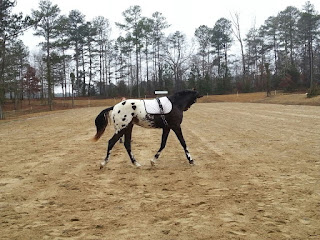 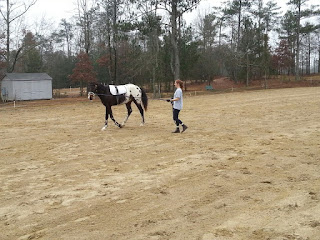 So then... since he was sorta naughty.. we gave him a mental break and then I walked him up to jump ring and made him work again. He was good still, so then he got to go back to the trailer. I unloaded Fleck and put Danny and May in the trailer together. Soooo funny!!! As frantic and freaked out as the big horses were... the babies were the opposite. They could have cared less that their "Uncles" went up to work. They were like "alfalfa hay..... sweet!". hee hee...Such good babies! 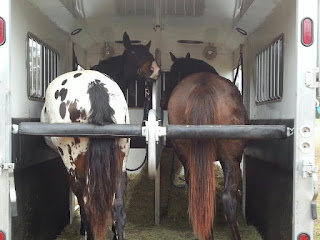 Well, then Christina had to go to work, so she had to take her horses. So poor Dan got left on his trailer alone. But he didn't care. He just hung out until Fleck and I were done. Oh, I love this kid!!! 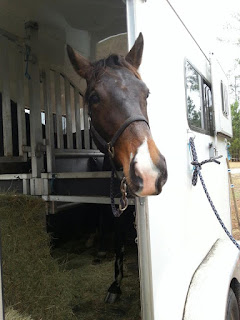 Oh, and Beth said his movement was getting even better!!!
Posted by Holly at 8:13 PM No comments: