And I would consider it a SUCCESS!!! 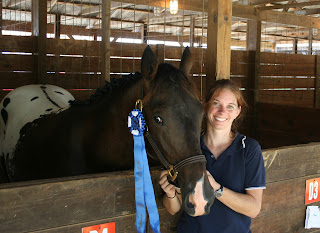 Little baby horse gets MEGA props for being such a superstar! So... first, we hauled to a friends house. Which meant that Dan hauled by himself. This isn't he first time, but it's still a big step for him going without Fleck. So then we got to Liz's and he hung out in her pasture while we swapped stuff over to her rig. Then we loaded Dan up. Well, he was being naughty and stubborn and wouldn't load. Which was fine, but then he tried to eat a rock and was ignoring me. So he got a little bit of a "Pay attention" lesson and then he loaded fairly quickly after that. We then added Party to the mix and Dan was making baby faces at her pretty self. They both hauled well. Again, props to Dan... not only was this a long haul, but it was his first time in a slant load. He did fine. We even stopped at McDonalds and let him hang his head out some. 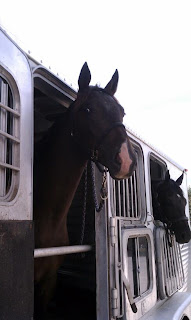 We got to the showgrounds and unloaded. Dan did great in his stall. He settled right in and was a good boy. The show was at "Why Not An American Ark" showgrounds which also houses a petting zoo and is full of wild animals. There was wallabies, peacocks, bison, zebras, llamas, donkeys, goats, and tons of ducks and geese. Dan handled all of those really well. He didn't even blink when the giant Gander came walking by. So after we settled in we took a walk and then did a little practice in the indoor arena. He was pretty good. He spooked at the barrels but bravely went up and investigated. And he didn't lose his cool when the 5 year old was freaking out in the arena. So since he was good, we decided to quit while we were ahead and head back. He needed his bath anyways. So I gave him his first official bath. He was really good for it. And he was so squeaky clean he was pink! So we finally put them to bed and headed to the hotel. I was hoping that he would still be clean in the morning. 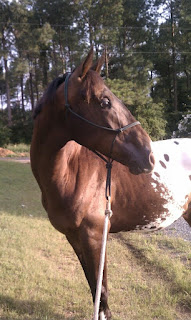 Doh! We had one or two poop stains, but he was good while I got them scrubbed out. Then I braided his mane. Oh boy... that was hard work! It's so long that despite me cutting it and thinning it.. it took awhile! And they were too long so they didn't look very good. I'll cut another inch or two off when we get home. But he was decent for it considering he's a yearling colt who's never had his mane braided. And they didn't look too horrid.

Finally it was our turn to go up there. Breathe..... and put on the chain shank. :)
He wasn't bad... but he wasn't good. He walked up fine and was good standing around. We got a lot of compliments. And was told how big he was. Hee hee.. He was a little bit on his tiptoes. So then we went into the ring. He stood nicely and then we started to walk. He was naughty, but I was also picking at him. I should have just let him be instead of insisting he was perfect, because that made him worse. He kept trying to eat the lead and I kept shoeing him off. So he was a bit fussy and didn't settle and show off his walk. We tried to trot and that made things worse. So finally the judge suggested that I just trot him down the long side against the rail. Wow... what a difference... knowing I had something to run him into to stop him if needed.... that was a good feeling. So we got a decent trot out of him and I had decided to just let him eat his lead at that point. So he settled and behaved.
http://www.youtube.com/watch?v=b45sxUOSw3U&list=FLK3j8oU9Q2Opx7PtCMqJ7hw&index=1&feature=plpp_video 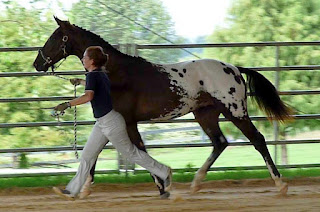 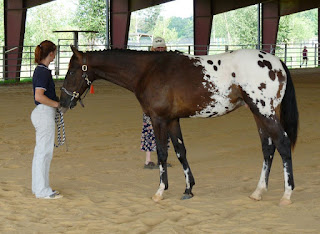 He was the only yearling, so we won our division! But... the judge was fantastic. She said that she saw him the day before and was impressed by his elegance. She said it was a pleasure to see such a nice mover with all that color too. Whooo hooo!! She said she would have scored him better but couldn't because he wouldn't settle and show off his nice walk. But he scored all 7's or higher and we qualified for East Coast Champs by scoring higher than 70% so whoo hooo. Go baby horse!! 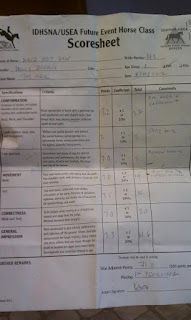 Then they called us all back in for the ribbons and he behaved himself pretty well there too. He even let me hang his pretty blue ribbon on his halter. Yay!!! Hopefully the first of many. 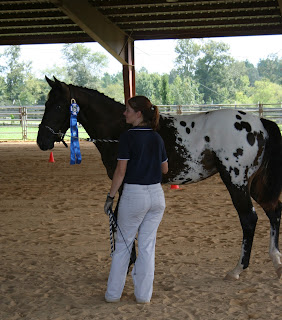 After a rest we decided to join Mary, Wayne, and Encore out in the XC field. We went out and played in the water and jumped a few of the maiden jumps and the bank and ditches. He was a good boy! Then it was time to go home and again, he loaded well and hauled well. 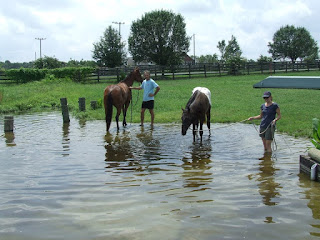 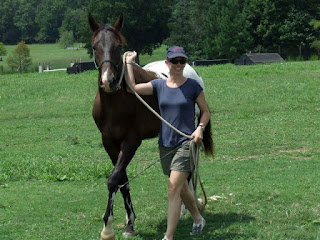 So all in all... while he was naughty in the ring... so what!? He had every right to be. The important thing is that he handled the whole show like an old pro. He didn't stress, he slept, he ate, he drank, he pooped, he peed, he walked around without dragging me. He's a good kid :) 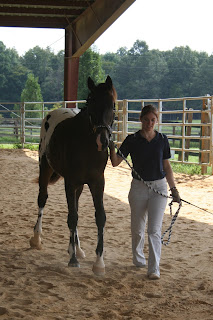 Wake up.. it's time for school

So... this morning (before the naughtyness in the previous post)... I woke up early and went to feed the kids. Dan was sleeping in the dirt and Fleck was sleeping in the stall on the shavings. :) I didn't want to spook them so I was calling to them. Dan looked up over his shoulder at me and let out the biggest horse yawn and then.. went right back to passed out. I snuck in to Fleck and snuggled with him for a minute before he got up. Then I went back out to Dan.. who was still asleep. I snuggled with him for a minute and he lifted his head, yawned twice and laid it back down. At this point I'm starting to worry that he's colicky. But nope.. he's just being a lazy boy. I finally noticed him getting up when I went into the feed room and starting getting breakfast ready. But I was giggling.. he was like a little kid before school. "No... I don't wanna get up".... "Just five more minutes". Hee hee.... 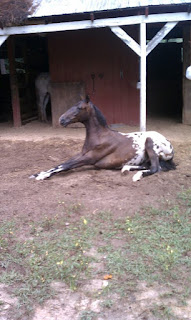 So... Mr Danomite has been getting prepped for his FEH debut. It's not been going so well. Ha! Well... that's not entirely true. He's been pretty good at home, but when I get him out to other farms it all goes to pieces. That boy is a show off. Today he was HORRIBLE!!! Like rearing and even came at me with a hoof. We had a come to Jesus meeting and we're good now, but it ended up with him with a chain over his nose. I hated to do it, but he's got to learn respect. And that's what it took today. So.. while we're at home, we'll work on his good boy manners. And when we're away.. we'll insure his good boy manners with the chain. :) I think gelding him will help too. And its the age hes' at. He's a typical teenage boy right now. But today was frustrating. 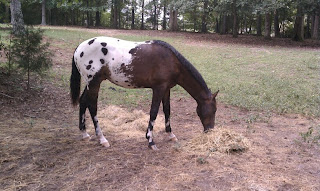 But, like I said, we ended on a good note. And... he stood on the trailer with only Houston in the other trailer to keep him company while the "big brothers" went out of sight for a jump lesson. :) And I managed to clip his muzzle yesterday. And his mane is cut and mostly pulled.

And in the future... I'll want that bit of spunk and attitude. So I'm trying not to quell it... just quiet it down a bit. :)

So.. hoping we, and everyone else, survive this weekend! Pictures to come. I'm looking forward to it... since I'll be well armed. :)

He's helping me unload!!
ha ha... Goofy horse!!! I had some empty boxes in the back of the truck to take to the recyle bin. I had to unload a bit of hay and while I was doing that, the boys were helping me by eating on it. Once the hay was gone though Dan decided he'd help me finish unloading.... 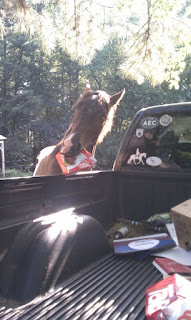 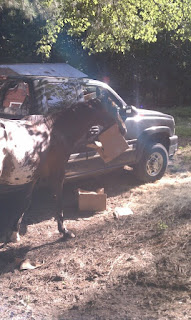 So.. darn this computer for not loading my videos, but.... be assured.. they are HILARIOUS!!

I bought him a giant ball... It took about 20 minutes to pump/blow up. It lasted all of 8 minutes.... He played with it for about 30 seconds.. realized he couldn't bite it and gave up. Then I bounced it at him again... and he caught on. He bounced it a bit. Rolled it and then chased it (almost running into the tree!). Then chased it so more, them somehow managed to grab a hold of it in his teeth. He smacked himself upside the head with it - and it made the classic "boink" noise which was hilarious! Then he flung it down the cliff, went to rescue it, and in the process... popped it! DOh... All of five minutes into really playing with it. Argh... Oh well. He then proceeded to fling the empty rubber around a bit. Then got bored and grabbed his small jolly ball and played with it. Then ran to the stall and came out with the feed bin and then the halter. Hee hee.... Classic Dan.

So then... another day, but same ol' antics... I had feed that I needed to unload. I knew I wasn't going to be able to get three bags in the barn before the horses (ie the boys!) ripped holes in the bags, so... I put the three bags in the back seat. I then pulled the truck down to the barn and went to get their breakfast ready figuring I'd unload the feed while they were eating. Well.... yes, except both boys stuck their heads in the truck. Fleck was content to just look and realize there was nothing edible. Danny had to taste test to make sure! He was like a bad dog locked in the car... he tried to chew on the seat!! Pulled on the seatbelt... threw the mail around... picked up the car keys... flung my wallet out in the dirt, and ate my sunglasses!!! Really baby horse, really?!?!  What a goofball!!! 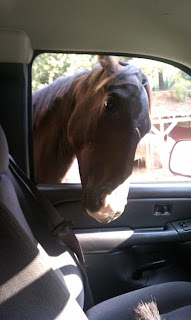 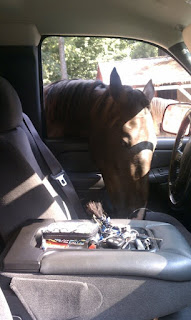 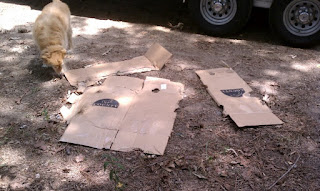 Work has been awfully busy so I'm slacking, but... basically we've been doing more of the usual with Danaroo. He did get this week off and it was not good for him! He definitely thrives on attention and needs a "job", even as a yearling!

We did another trail with Fleck and Danny was great!! I really think he shows off for other people. Which...may come in handy. :) I got some great pics... it was a beautiful morning, nice and early. We were all by ourselves and it was so quiet and nice. 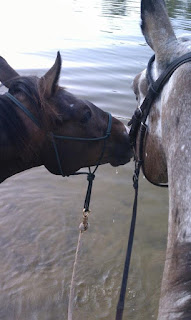 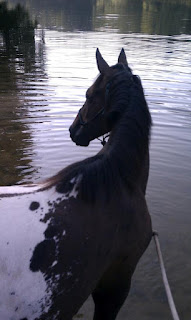 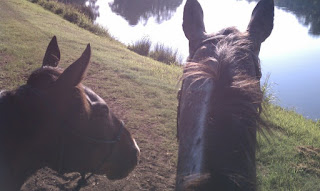 Then on the way back home, Danny caught sight of the cross country field and was READY to go!! 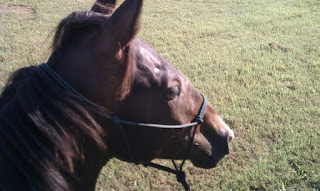 We've also been working in hand some more. He was so naughty at Ashland here the last time but then next time at home he was a perfect gentleman. So... typically baby. And like I said, he's a show off. So we'll just keep working on it. We've also gotten farther with the clippers and practiced a few braids. I'll definitely need to shorten and thin that mane! Hoping to get to it this weekend because next weekend is the debut!

Oh, and then there was more baby hilarity... I'll put that on another post though. ﻿