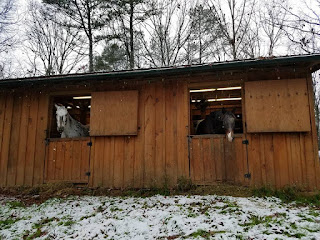 SNOW!!! Although it wasn't much. Apparently Alpharetta got almost 10 inches!! But here in Loganville, this was the extent of it. We got rain all day yesterday... and it was COLD. So the horses were in Thursday night, Friday day, and Friday night. Sometime in the wee hours of the morning it began snowing. When I woke up it was snowing outside. It was pretty!! I slept a smidge longer and then headed out to the barn to feed.

Danny's face was pretty funny when I opened up his window. Hee hee.. What's that?!?! It wasn't here last night. :) 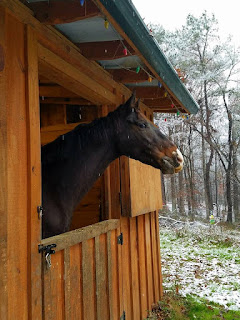 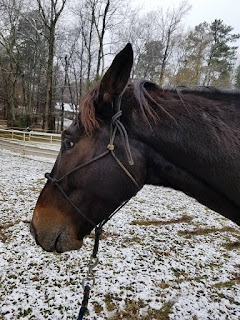 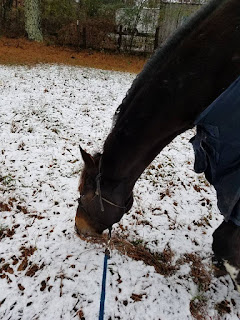 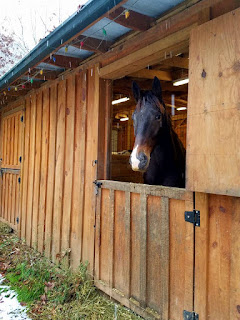 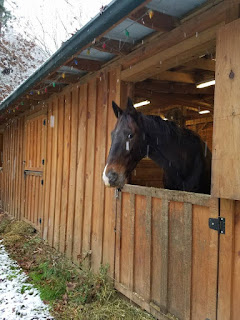 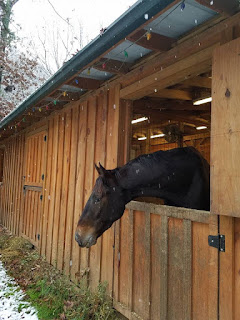 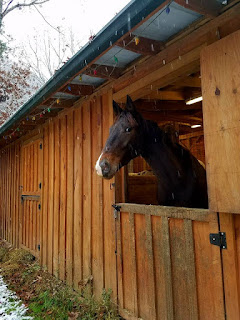 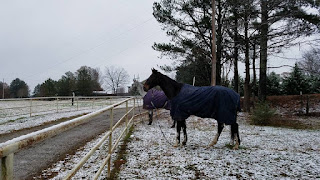 Apparently I did not give Dan enough Ace.. or enough time... Or maybe it's because it was snowy and different.. Or maybe because they had been in for 36 hours... Regardless... once we got into the front right pasture, Dan reared straight up and pawed the lead rope out of my hands. I swear he does it on purpose! Sigh... He took off at a canter and slid around a bit. Daniel!!! NOT conducive to making sure your butt stays healed! Luckily he let me catch him pretty quickly and didn't do too much running and sliding. So I marched them both back to the round pen and.... just tried to not look at how muddy and gross it was. At this point it had stopped snowing, starting drizzling very lightly, and then stopped raining. About the time I headed back into the house the sun came out. 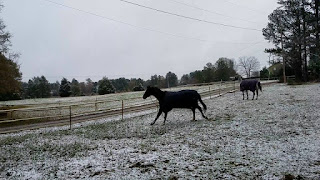 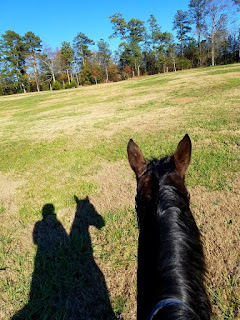 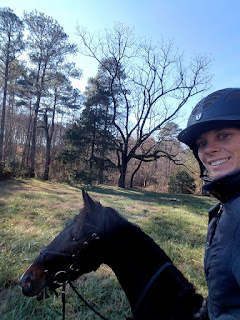 So... after lunch we headed out for a ride!! Dan loaded fairly easily and Fleck ignored us and went to go graze in the front field. I guess they've remembered how to be separated again. It was crazy how quickly the snow melted and how bright the sun was. If you look at the photos, it almost looks like Summer. But nope!! It was COLD!!!  40, but the wind was whipping and made it feel like 30 degrees. I had on fleece breeches, my carhart socks, a long john shirt, polar fleecy top, and my jacket, and winter gloves and was still a smidge chilly. 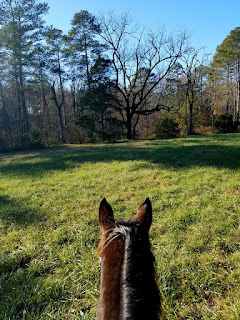 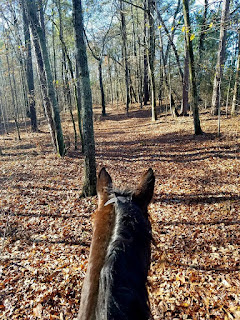 We had a lovely ride! Dan was fresh but settled quickly and we had a nice solid 5 minutes of trotting. We did it on the school house path this time. We also couldn't help ourselves so we walked over the ditch and up and down the small bank and then over two logs. We are sad we're missing out on the Gibbes XC clinci this weekend, so this was our consolation. 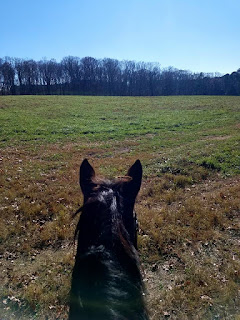 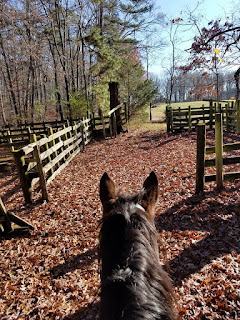 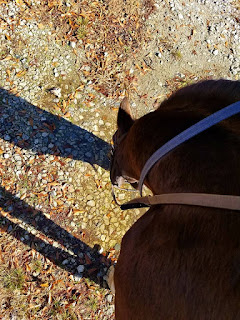 Oh Dan... Seriously?! He has a full water trough, heated water buckets in his stall, and yet, he stopped to drink from a puddle on the way home to the trailer. Goober!! There better not be opossum pee in that puddle!!

When we got home I turned him back out in the round pen but I think tomorrow we'll try the front right again. He's still SOOO girthy and grumpy tacking up and I'm afraid that he still has ulcers despite 30 days on ulcergard. :(
Posted by Holly at 9:19 PM