Today was a super crazy day! Despite being my day off it was another all out non-stop kind of day. It started with a 9 am acupuncture session for me. And man!!! What a difference it made. I can actually move my arm and back. I feel SOOOO Much better. I was laughing that I felt like I was going to run around all day flailing around like the wind sock things at car dealers. Hee hee... I really need to do my horses more frequently!! Acupuncture rocks!!!

Then I went and lasered 3 horses at UGA, then went and acupunctured a dog, then ran to Teresa's to get her signature on the title (which was already on there... argh!!) and while I was there I took a little spin on the scooter (which is for sale but I can't afford that too!). Then I rushed home, unhooked the truck from the horse trailer, hitched it to the hay trailer and flew over to Jennifers to get hay. I got 40 bales and then went and got gas as I was getting low. I did it right!! Diesel!

Then I went home and unloaded 40 bales of hay, parked the hay trailer, unhitched, and rehitched to the trailer. Then I grabbed Dan and raced to Ashland to get in a ride with her and Canna. 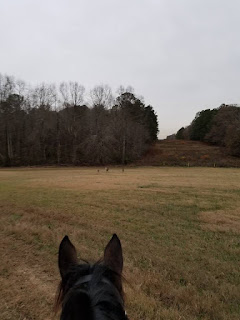 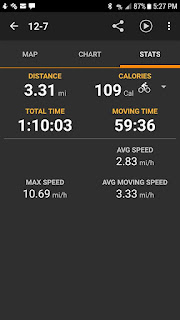 Danny was a bit sassy and unfortunately so was Callie. We got about 2 minutes into the cross country field trail in the woods when we decided to go back to the arena's so that Callie could settle down. And probably Dan too. :) But then Dan starting getting really spooky acting near the radio shack and his tongue was flinging out. So I told them I was going to hit the trails and get his trot in and perhaps that would let Callie settle down. So we parted ways. And sure enough, once I got Dan marching on, he settled. (And apparently Callie settled once we left... oops!). So we headed off and then Kelli texted and said they wanted to try again. We decided that I would head out to the hay field and do my trot and then meet them in the field behind the lake. So Dan and I hit the hay field and started our trot by the hay barn. As we hit the second open field we saw a herd of 4 deer standing in the middle. We stopped, the deer startled and scampered a few steps and then stopped. We stared at each other for a few seconds and.... then the deer went back to grazing. So..... ????  Now what?! Well, my precious minutes were ticking off, so I decided to pick the trot back up and Dan and I kept an eye on them. They never moved and just watched us as we trotted in a circle around then. Crazy tame deer! 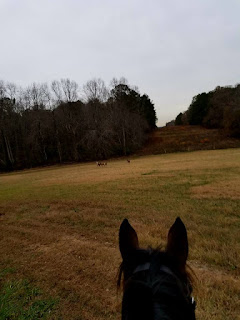