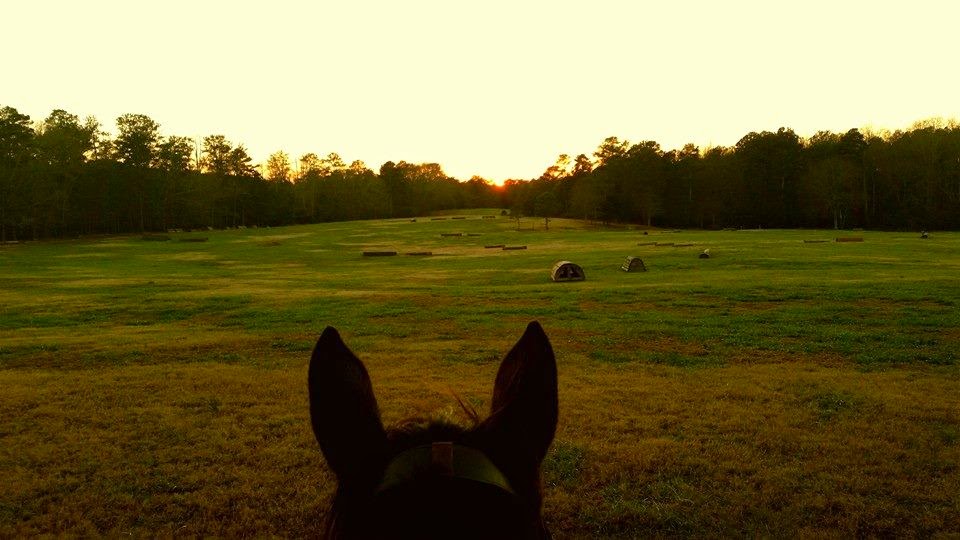 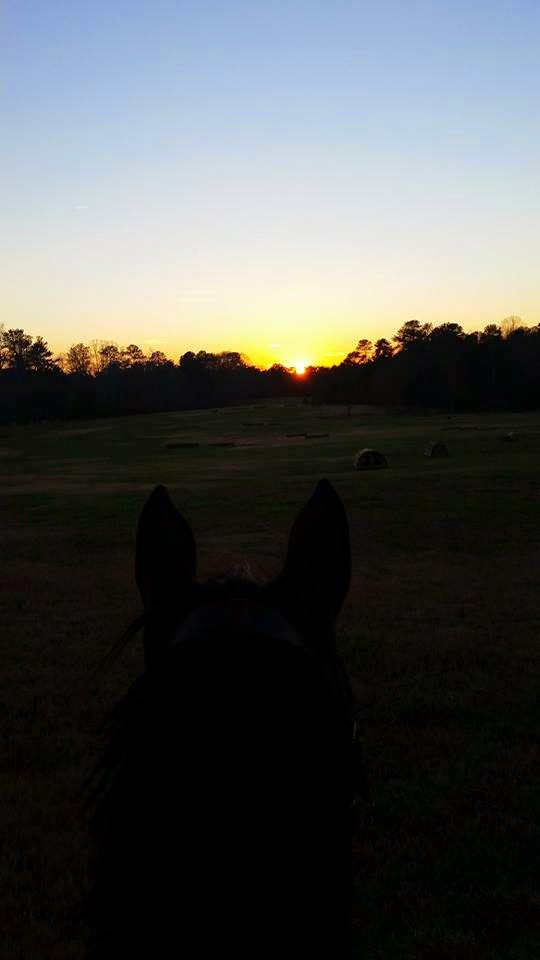 I went for a quick ride on Dan because I had a horrible headache and thought I might puke. But I really really wanted to ride him. I had borrowed a dressage saddle from a friend to see if it would work for him. And it's nice! Really nice. Dan and I had a good ride. But he was so fussy in the bridle. However, I figured out that I was tightening up on the reins a lot because he was being so fussy, which was making him fussy. Sigh. So I lengthened them and he was much more solid. I still tried for a connection, but it was on a longer rein. That seemed to make him happy. :) We didn't do too much and then we just went for a quick little hack after. But it was good to be on him. 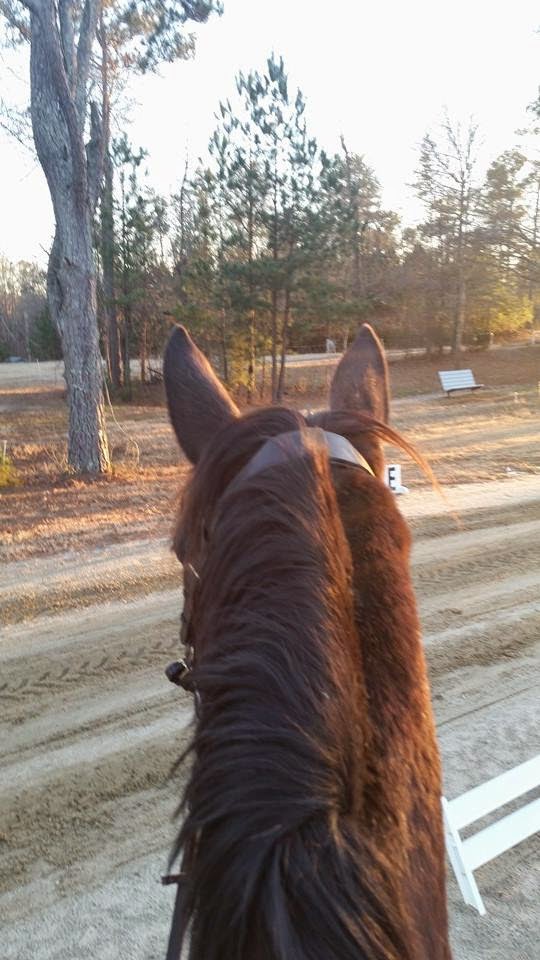 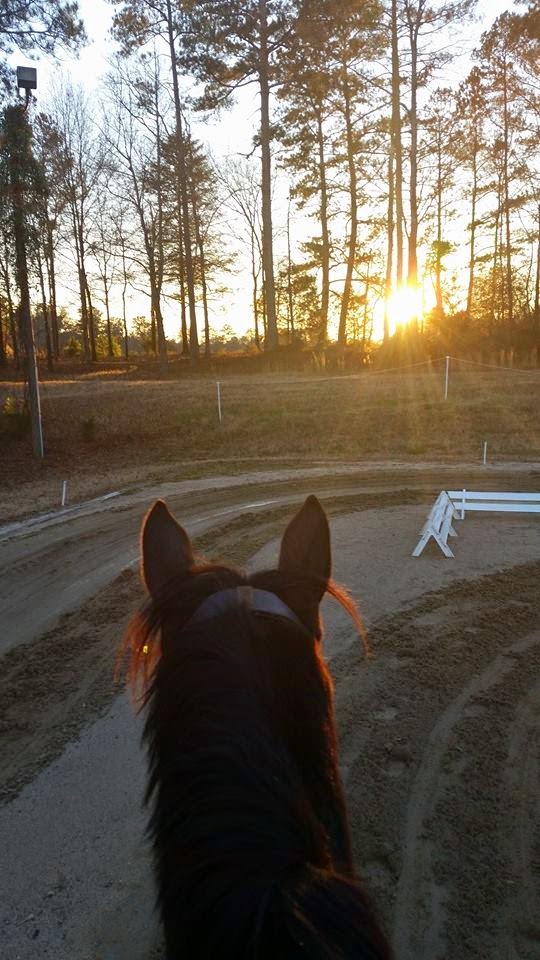 Danny boy...oh danny boy. ;) I took both boys to Full Gallop for their schooling show. Dan hauled the 2.5 hours great and I got them settled in their stalls. I decided to go ahead and hop on both boys for a quick hack before dark. Dan did pretty well. He was a little excited but we had a decent ride. Meanwhile though Fleck had torn down his stall - kicked apart one board and pulled two halfway off. Jeesh! So then Dan was a good boy while I rode Fleck. I got them settled for the night and tucked in and then it was off to bed. 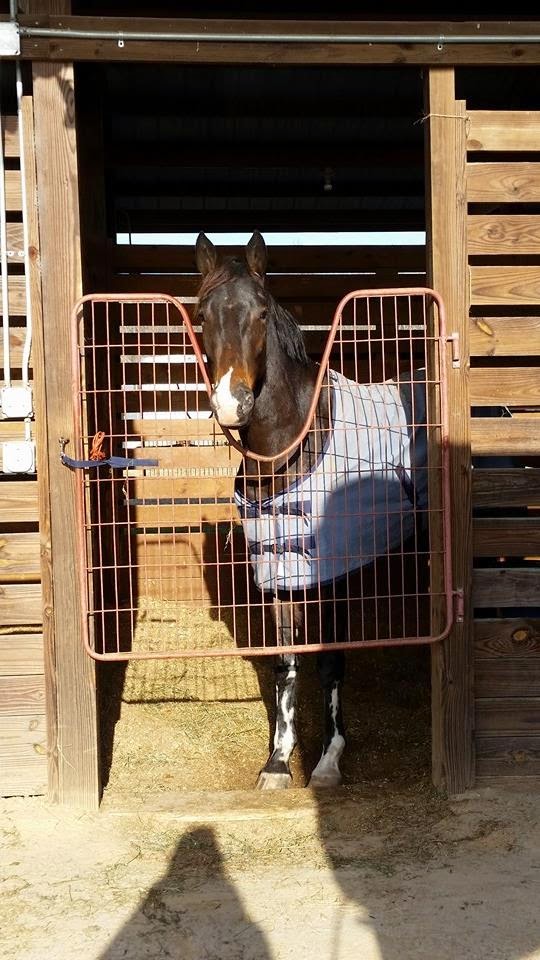 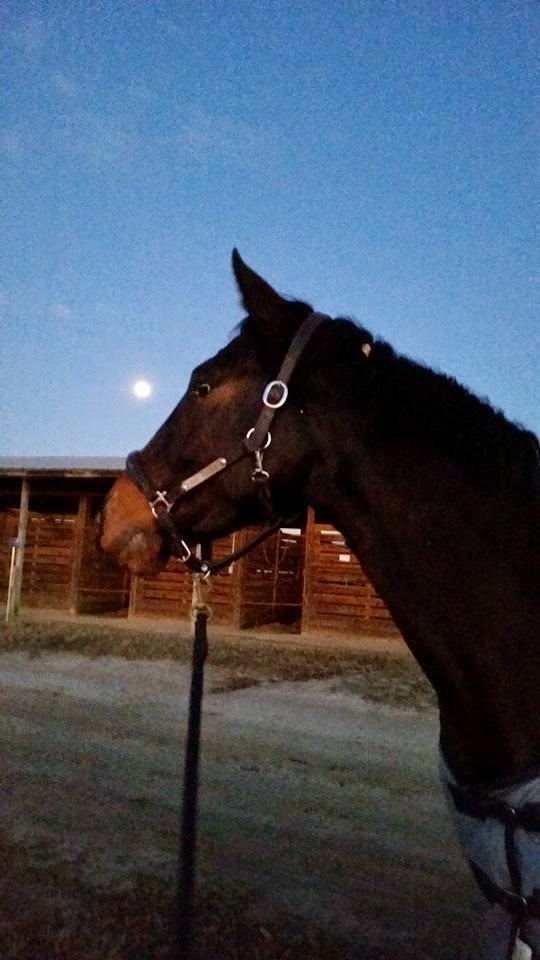 Sunday was a bit of a rushed day with all that was going on. I took them both for a quick walk and even threw them in the paddock for a 10 minute romp. I rode Fleck first so Dan had to stay in his stall all day. And other than calling for Fleck, he seemed to handle it well. Finally it was his turn. I ended up rushing because I watched a friend go instead of getting Dan ready. I didn't quite think I would need as much time as I did. So I got on and headed over to the dressage rings. I didn't even have time to do any in hand work. The dressage rings were across the pastures in the neighbors farm so it was a good distance away. We trotted some of the way and all was going well until we got to the paddocks just before the dressage rings. Then it was a sudden stop, shoulder drop, and turn and bolt. I managed to keep him under wraps and got into the warm up area. He was quite naughty... the ring steward even asked me "are you sure you want to do this?"! hee hee. Not really! But I went ahead and headed out to the rings. There was only three horses out there, including us. They were waiting on test forms so I had a little extra time luckily. He was still being silly... occasionally squirting off towards the barns. But it wasn't anything super bad. The one girl went in and did her test and started to leave. I asked her to stay and she said she had to leave. The other girls friends said she would stay. Bless them!! They were super nice. She had a lovely test and then it was my turn. Dan was still being feisty. We had some good laughs at him and then in we went. I told the judge not to be alarmed, but I was just going to get it done. :) 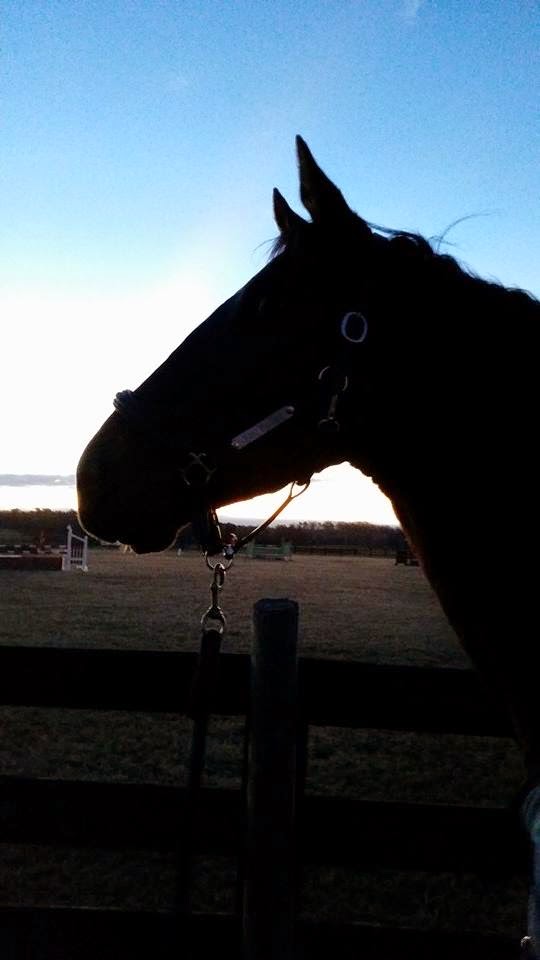 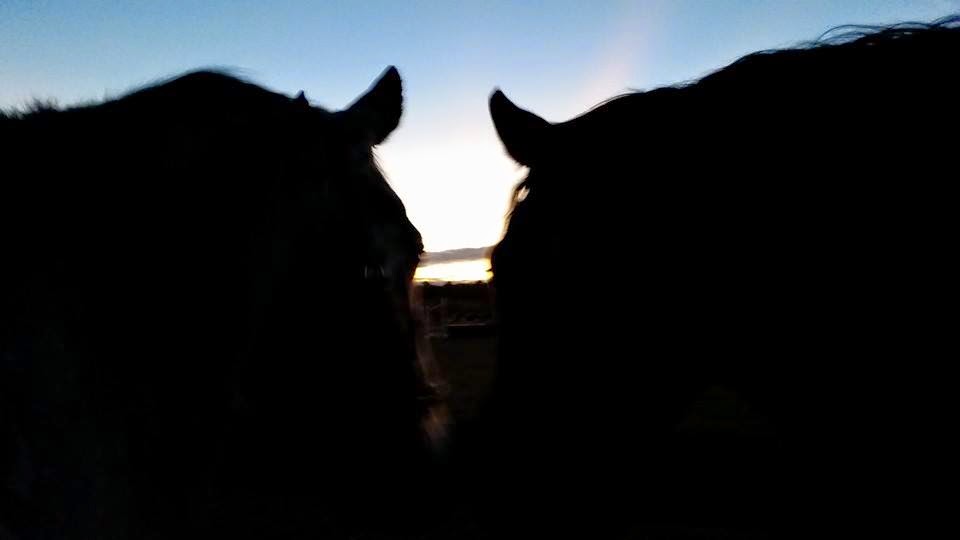 Intro B went okay. He cantered in both of our trot circles and our centerlines were quite wiggly and squirmy. He didn't halt very well, although perhaps I didn't prepare him propely. He's quite responsive to my seat and I think I got my handsy than I should have. But you know, we survived. I asked if I was okay to go ahead and do Intro Test C and the judge and my new friend agreed. So we went back in.
Intro Test B
Intro C was a little better. We got both of our canter leads and we were a little less fussy. He did canter down centerline the second time. Doh! But not too shabby.
Intro Test C
Point is... we accomplished it. It was a big step for him. Lots of wind, only one horse for company, he spent the night being stalled.... So props to the kid for getting through it. :) 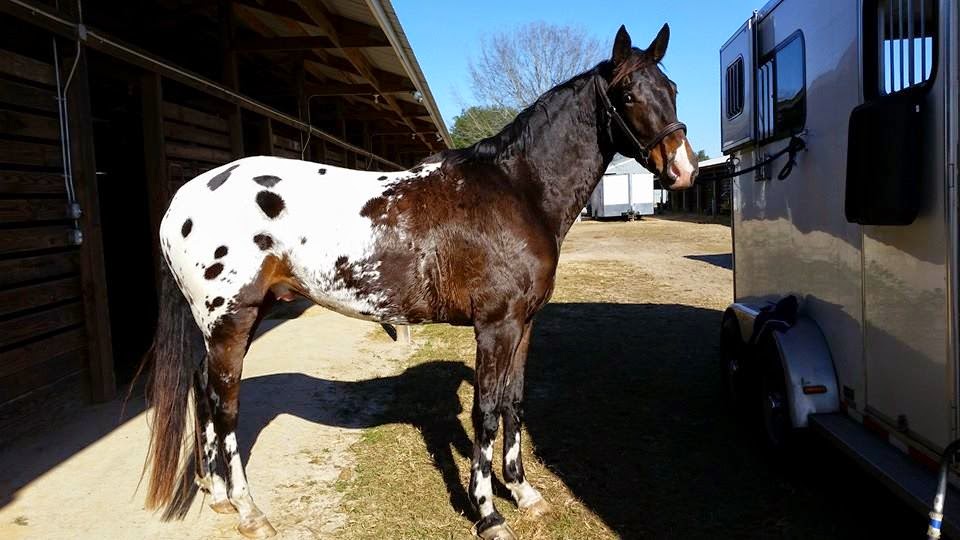 Danny and Fleck and I headed to the mountains for a trail ride adventure! We met up with Lisa at Fausett Farms in Dahlonega. Lisa rode Fleck and I rode Dan. It was a great place to ride. There was water, a wash rack, and great parking. The trails were nice too. Great views and nice wide trails for most of the way. Lots and lots of hills though. Steep hills!! And multiple paths with multiple distances. There was even a spot with a paddock for the horses and picnic tables and a lake. Super cool!! It only took about 2 hours to get there and that was with some construction traffic.

Dan did great! He behaved himself and was a good sport about the hills. He was breathing hard!! But he did well and got a second wind and tried to throw in the occasional buck. :) Such a trooper! 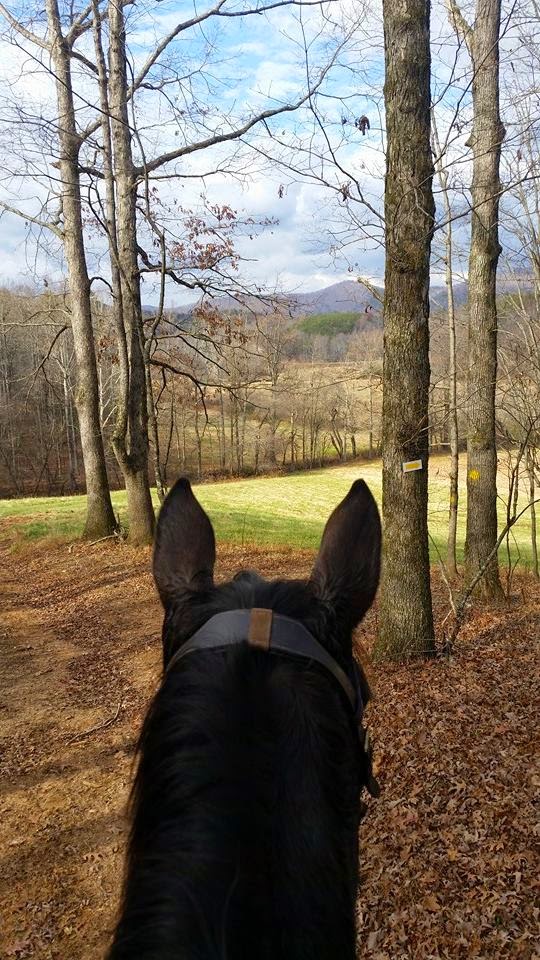 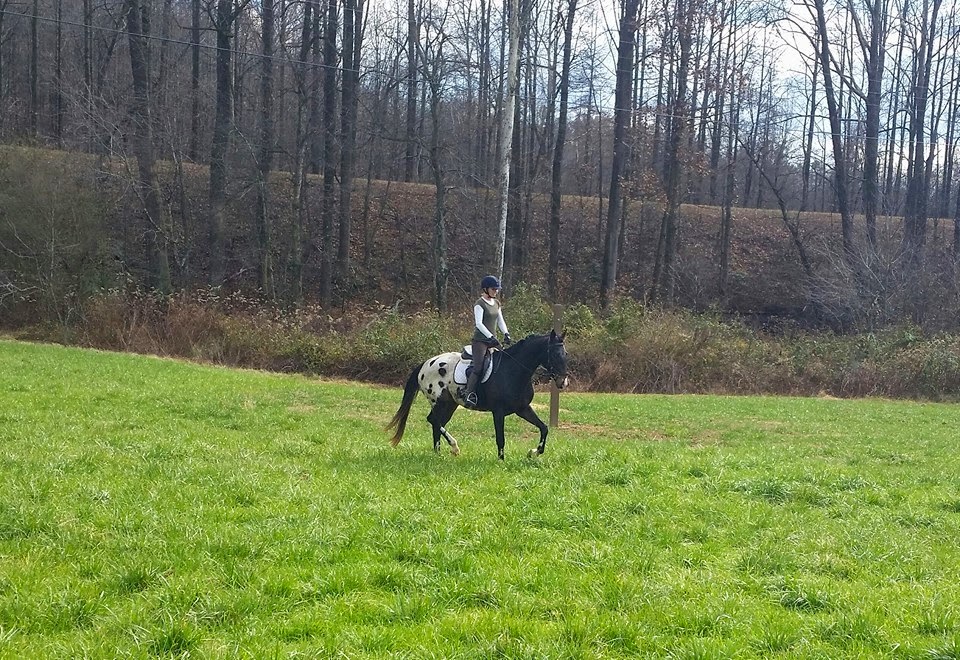 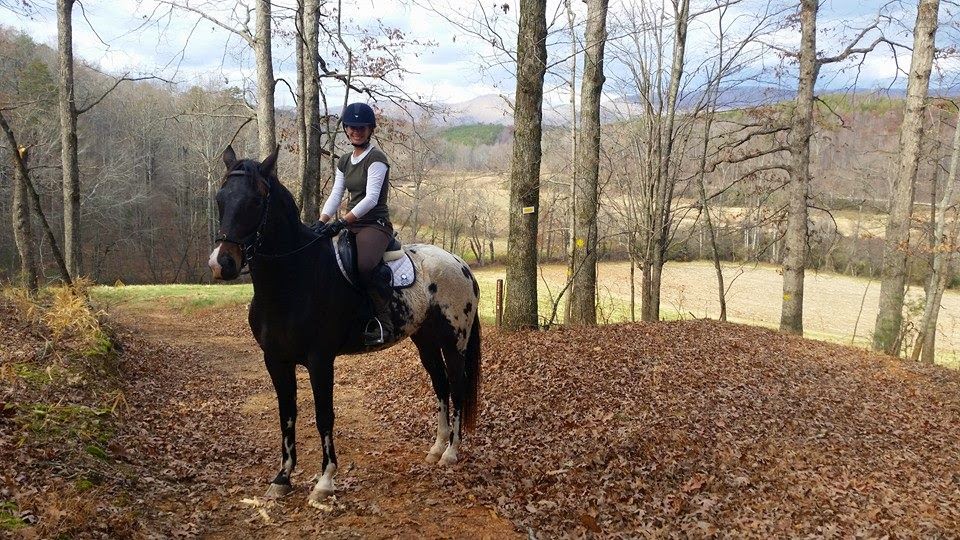 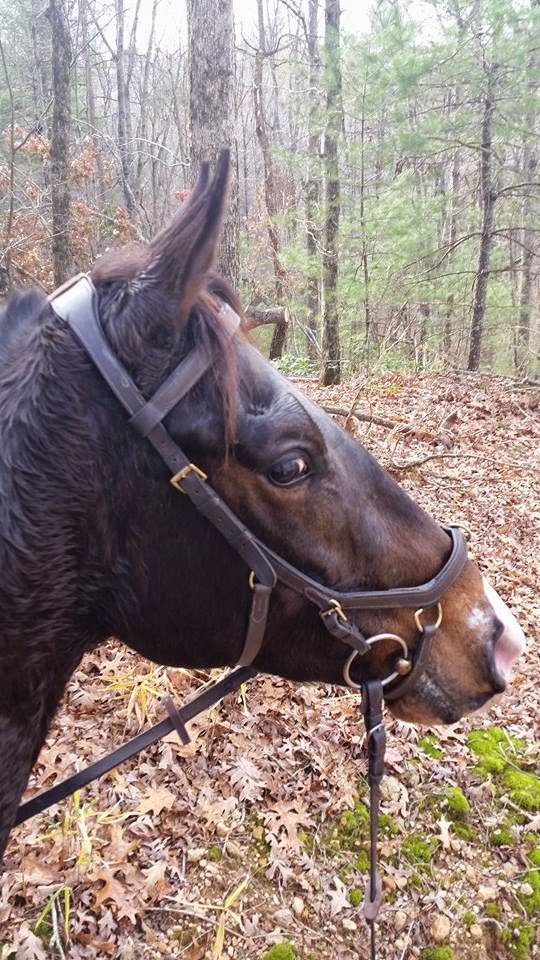 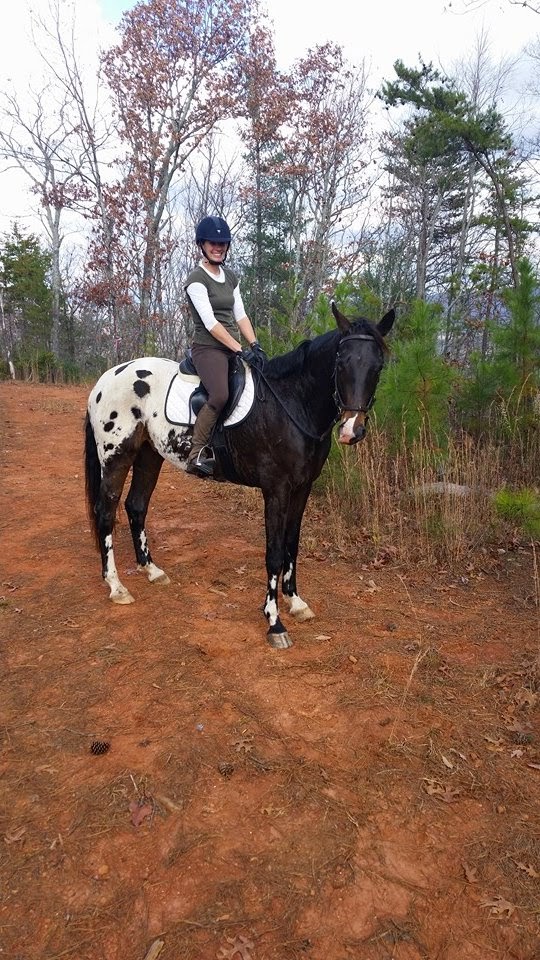 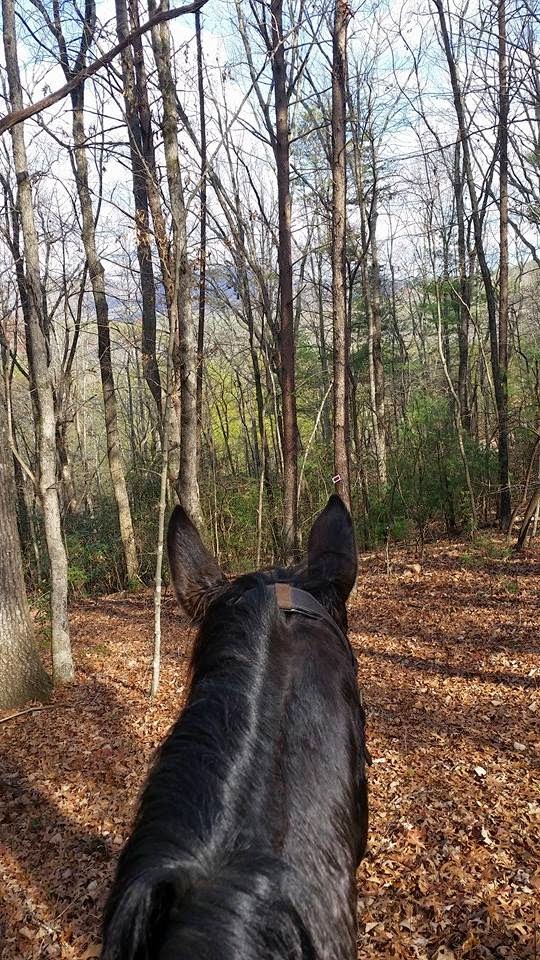 Great news!! Fleck and I came home from Pine Top to a very sound and VERY Spunky Danny! There was a giant hole in his coronary band where he had blown the abscess out. So phew!! So glad that's all it was. He was very glad that it blew too.
:) 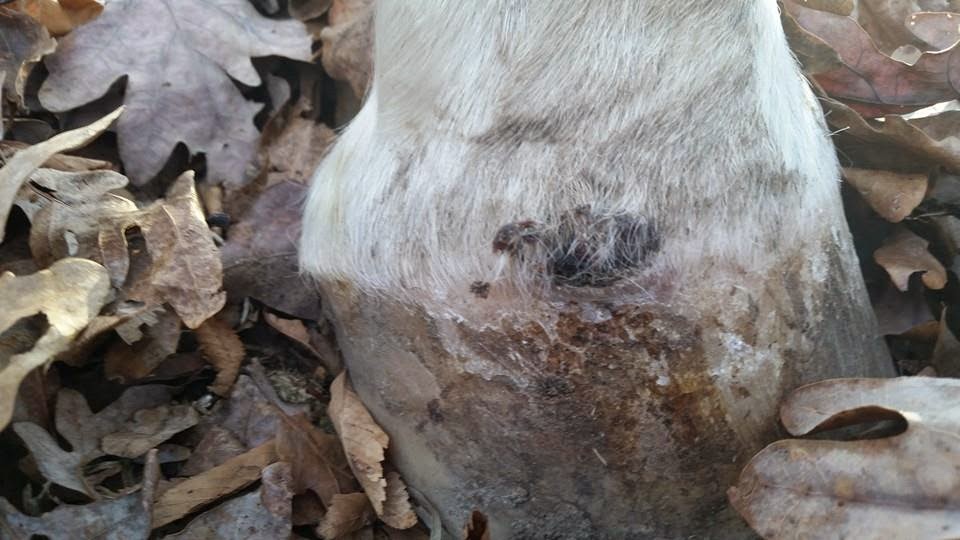 Danny feels BETTER!!!
So today he got to go to Ashland for a ride to prep for tomorrow. :) He was a good boy but a little fussy. I think I may have gotten a bit heavy in the rein connection, but I was trying to work on getting a connection. Sigh. I hope I do right by him. We worked on our leg yields and he wasn't too bad even at the trot. We worked on the right lead canter again too and poor guy. He really was trying the other day. It took a few tries but he got it again today. I learned a very important lesson today on him though. He's really bad about bulging out that right rib cage. Especially coming down the long side. I was getting frustrated because when he's bent against me, it makes it very hard to get him to pick up his right lead. Well.... turns out... he's bulding against my right leg because I have NO RIGHT SEAT BONE! Argh... Once I sat down on my right seat bone, he bent around my right leg and was so much better. Yay!!! Poor kid... He's not even really trained and yet here he is, already responding to my seat aids. 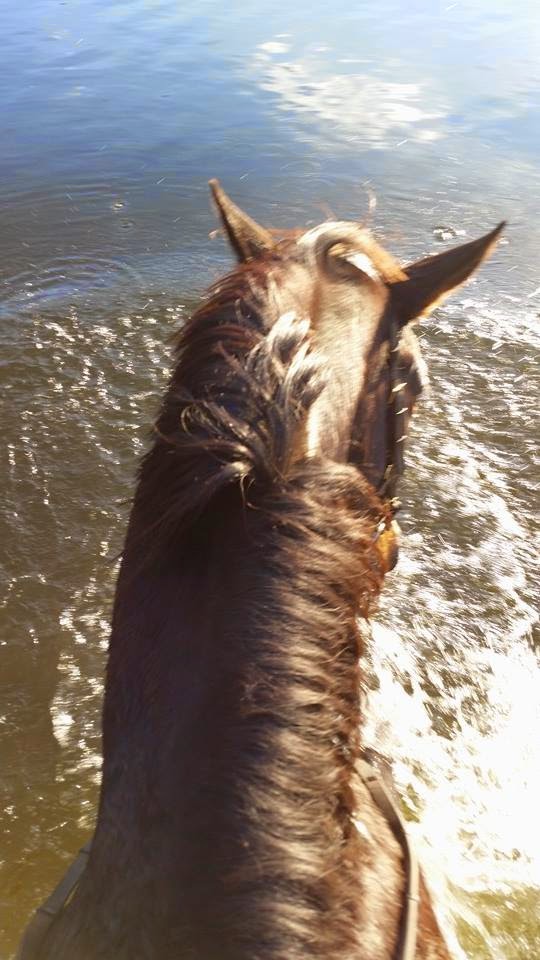 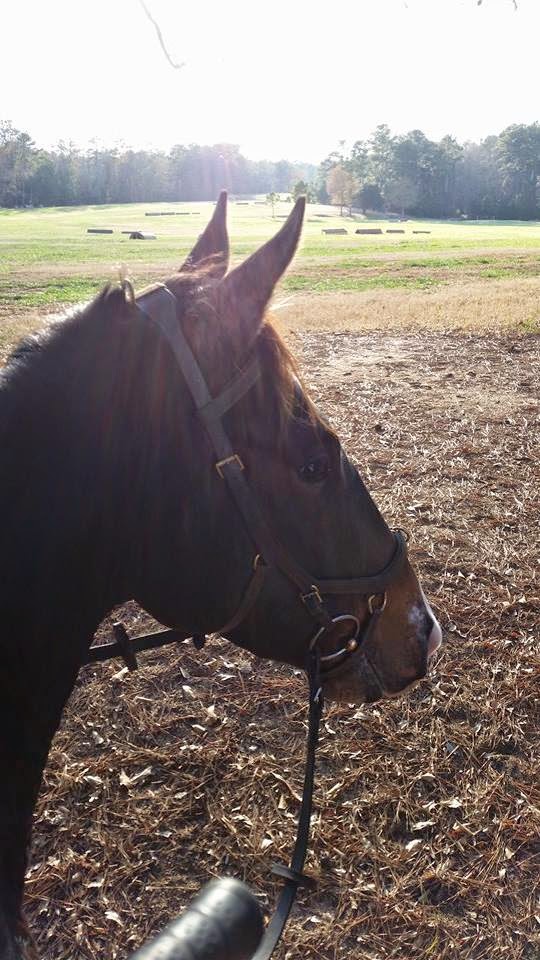 The pressure is on! Now I really need to learn how to ride.
So then we went for a trail ride because he worked hard. It was such a beautiful day too. I wanted to let him play in the lake. So off we went and he was great. We had to chase the geese away but he got to play in the lake and splashed. Then on the way home I let him canter up the hill on "Four Terraces". And oh my.... that canter!!!! I LOVE LOVE LOVE that canter!!! It took a little bit to get him back down to the trot, but... I wasn't trying too hard. :) He actually comes down to the trot better when I start posting than when I use the reins. 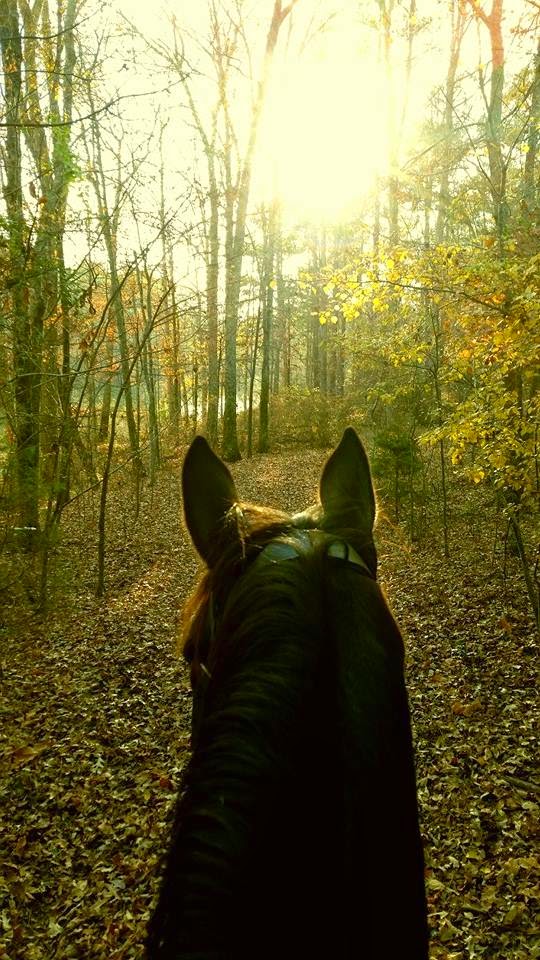 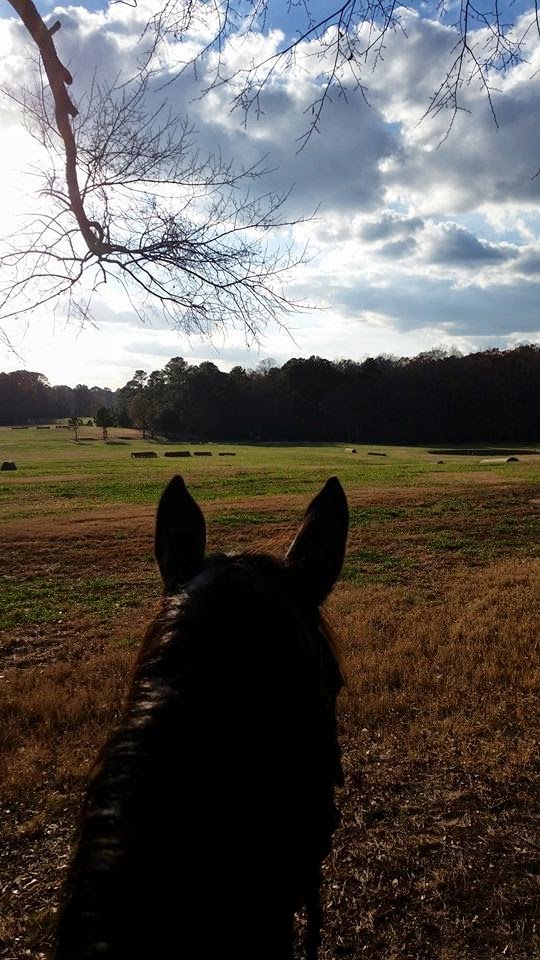 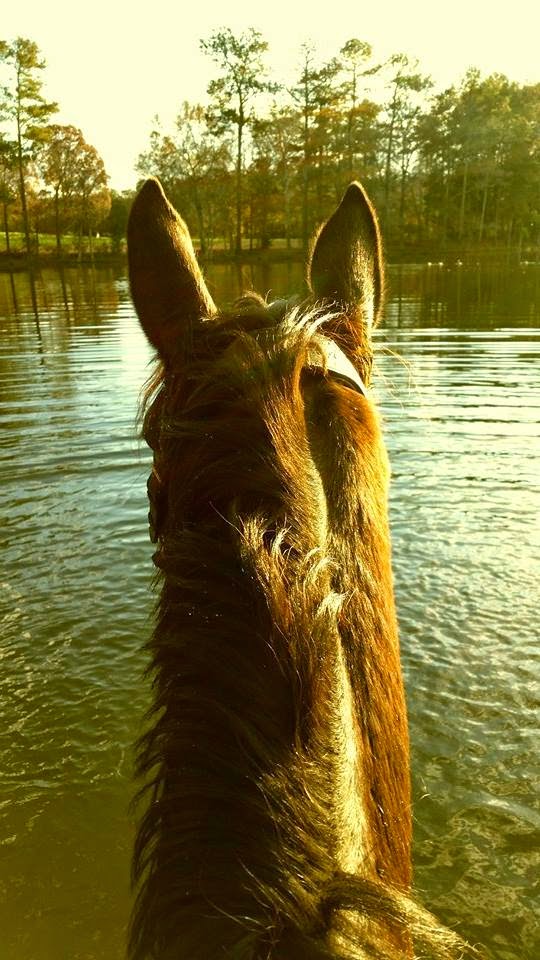 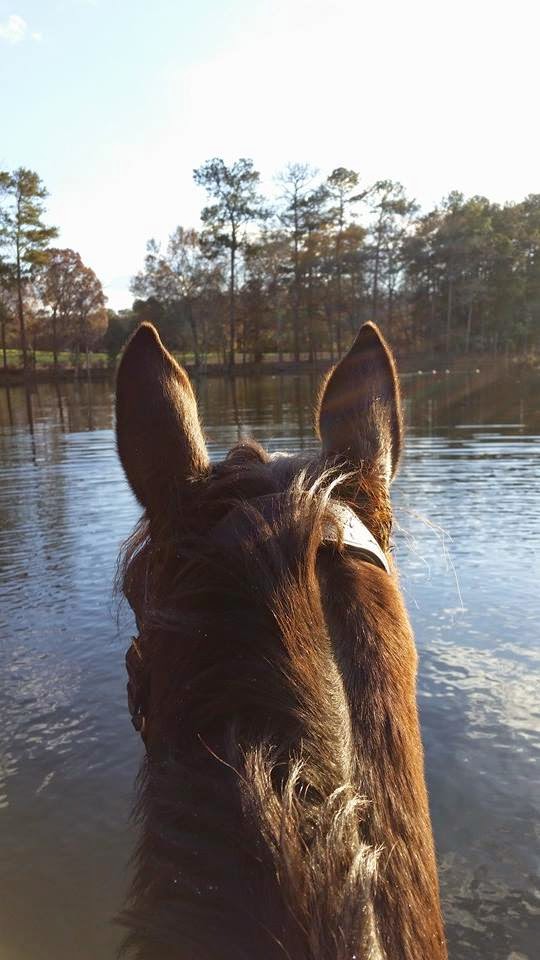 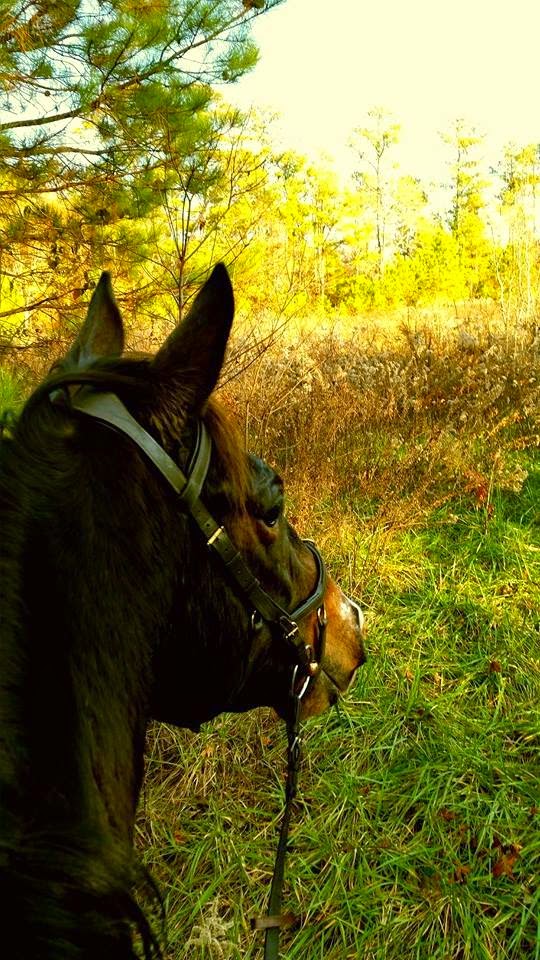 Love this kid!!! Tomorrow should be a fun day too. I'm hauling both boys to the mountains to trail ride with Lisa. She'll ride Fleck and I'll ride Dan. :)
Posted by Holly at 6:27 PM No comments: