Thursday: Picking Dan up from Beth Boot camp. Beth told me that he needs structure and structure makes him happy. Once he had some ground work and rules on the ground he was a gentleman under saddle and went right to work. Rules: Assume the position in cross ties. Ties must be loose and he must be behind them (not pushed up against them, straining them). He must be square and centered and he cannot move or chew on the ties. When leading… he must stay behind me or at my shoulder and not get ahead. He’s not allowed to graze, sniff poop, or fraternize with other horses. If he does, backing him up and rapidly works best. No chewing, no grazing under saddle, no snaking his head at me or other horse. He can pin his ears (AS LONG as he’s within the rest of the rules) but no snaking of the head or coming at whoever he’s pinning his ears at. Beth also said that he’s a really nice horse… like she knew he was nice, but now she knows he’s *REALLY* nice. And he needs to behave so he doesn’t hurt himself or others. So then she rode him since I was feeling icky. He looked good! Much more connected back to front and underneath himself. Yay! Then I got on. And wow!! His walk was better from the get go. I didn’t have to nag. He was forward. The trot was pretty nice too and the canter was amazing!!! So basically she said that I needed to ride him a bit shoulders out (not fore, out) to get him aligned up. It will be straight but to me it will feel like he’s shoulders out as I’ve tended to let him collapse on the inside shoulder in an effort to keep him from flinging his shoulders to the outside and escaping. He needs to be straighter though his body. She said that she couldn’t tell from watching but riding him, he was so wiggly in the contact and really wouldn’t go into the right rein. Yes!! Thank you!! I agree. So I didn’t do much but worked on those things and we had a nice ride.
Then I got home and Fleck tried to kill Dan… dan pulled a shoe… wouldn’t eat…. 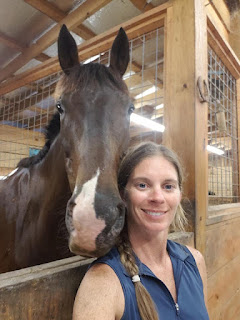 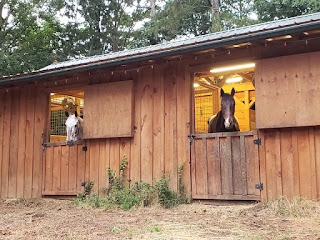 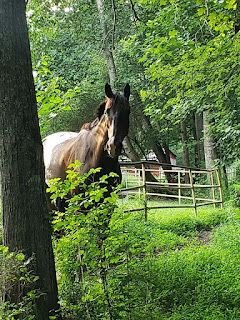 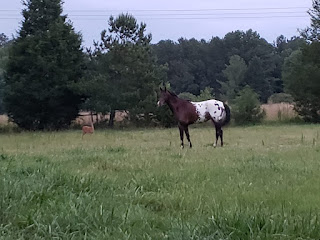 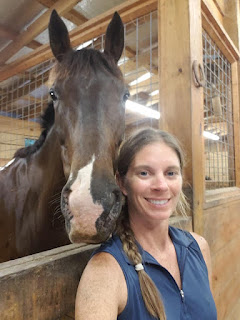