Today was a SUPER day! It was beautiful weather! Perfect for riding. Lots of sunshine and warm but with a brisk breeze. Beth was at Ashland so I signed up for two lessons! 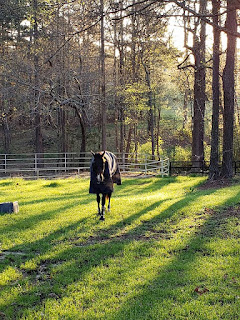 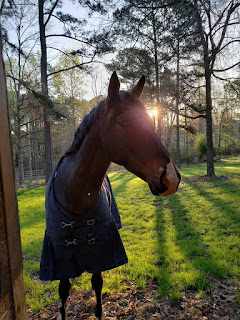 First Dan and I jumped at 9 am with another nice girl and her cute horse. And it was so funny because the girl had a bunch of people with her watching. And there were two young girls and they were in the jump arena jumping the fences on foot when we walked up. Danny was so mortified or confused and was staring at them like "What the heck are those?" .... "What are they doing?"... hee hee. It was funny. So then the littlest one wanted to pet him and came up to pet him on the shoulder. She barely reached his shoulder. Dan spooked a little at her and arched away but didn't move. He was like "OMG, it's touching me.... make it stop Mom... make it stop"... ha ha.. We were cracking up. Then later she came running towards us to jump crew and Dan got all up and snorty and then pinned his ears at her. "It's coming right for us". Hee hee... It was pretty funny. So anyways, we carried on and Dan got over it. Beth reminded me to keep Dan's trot a little collected because he tends to run "off his feet" and get a little on the forehand. We warmed up and then started on a grid. Beth had me work on getting him to stay collected and slow, but energized. So.. not behind my leg and also not running. It's hard to do. :) Then I had to make sure that I kept the connection but still released over the fences. Then she reminded me that I had to keep him on the bit. Argh!! It was really hard....  UNTIL.... :) Beth reminded me to engage my shoulderblades. Ahhhh... Yes.. I remember that! And I did great. Then I overdid it and ruined it. And then I corrected it. :) Ha. Beth even said... "How do I say this... because you have a tendency to take things too literally.... " ha ha. Yep. But anyways... I had to engage my shoulderblades to help create a core essentially... It's a half halt through my body. So... if I put him on the bit (and yes... the correct way.. ride him into the contact and keep the connection, making sure to get his engine revved so it comes from behind) and engage my shoulder blades, he gets really really nice! I need to remember to use my shoulder blades to maintain, NOT to hold. It's not brakes, it's half halts. And keep following with my elbows but not too much. Then it magically makes it so much easier to follow and release over the fence without "rowing". And he jumps SOOOOO much nicer. Like, with a bascule and picks his knees up! And I can keep my form so much easier. I still need to remember my landing gear as I've gotten a little pinchy with my knees again. And I need to remember to push my hips back and keep my crotch near the saddle. And it helped when I did the light 3 point (Or whatever it is called because for some reason I feel like I always say the wrong name) at the base of the fence and could follow him better. We ended up doing a couple of courses, which was fun. And also, it helped to remember to count coming out of the turn. I really did see the distances better when I counted. :) So much fun. About half way through again, Dan got excited and decided that he was ready to play and his engine kicked on. :) 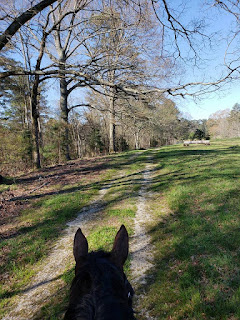 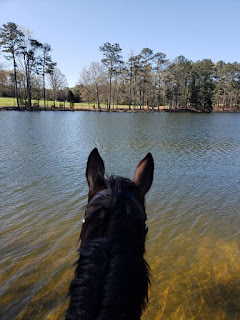 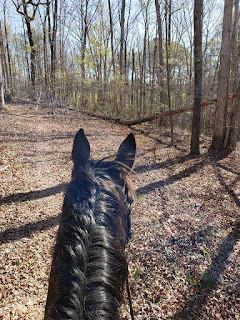 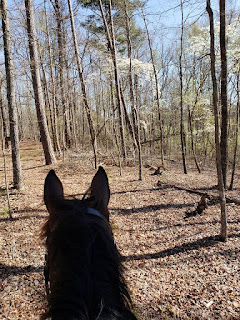 After we jumped I rode him to the lake to let him splash and get a drink and then we headed back to the trailer since he still had to dressage too. I tied him and Fleck up in the sun and sat down and ate my brunch. It was a poptart. Dan was interested so I gave him a bite. He LOVED it and basically ate half of the poptart with me. Goober. So then... I rode Fleck. And then I was getting ready to ride Dan again for dressage and went to go pee real quick. As soon as I turned around the truck and was out of sight I heard this terrible noise. I immediately walked back around the truck to find Dan starting innocently at me and the bars from the window all over the ground. What the heck?! I think the lead rope got caught around the window and when he pulled, it basically crumpled the windows, snapping all the welds on the bars, and ultimately dismantling and disintegrating my barred window. Seriously Dan??? Ugh... Of course in an effort to pull the remaining bit off and make sure there was no sharp edges, I sliced myself twice. 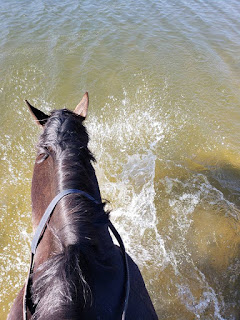 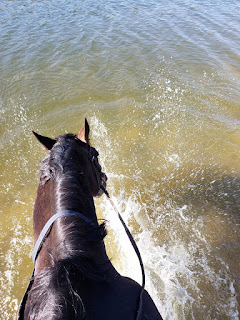 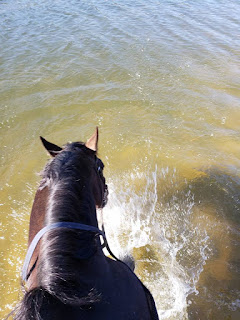 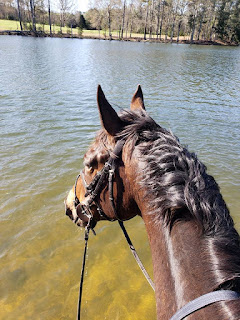 So anyways.... then I went to do dressage. I really thought he would be tired but I guess he power napped when I rode Fleck because he wasn't. I mean, he was a slug walking around, but once I picked him up he felt great!! We started off at the trot and then Beth made me do some sitting trot because yet again, Dan mistook the sit for a downward transition aid. Ugh.. When he's going nice... which he was... His back was up and he was forward without being running and when I really focused, he would sit.. that trot is lovely but not super easy to sit. We then worked on the connection and getting him evenly in both reins. It was pretty darn good. :) So then we did lots of rapid fire trot to canter to trot transitions. I had to keep the outside rein connection and not throw my hands towards him. On the downwards I really need to not let him run away for a few steps, but immediately get that nice collected uphill trot. It helped when I did the downward and went straight into sitting trot. It was worse tracking to the left for some reason. He kept bouncing me out of the saddle. Like literally bouncing me out of my stirrups. Beth said it was because I was locking somewhere. I'm not sure where, but keeping the connection in the outside rein really made a difference. And then in the downward tracking to the right, I have to really keep the inside rein connected and with inside bend. Lots of inside leg and hold that inside connection. But it was like magic when I did it. :) YaY! oh, and... huge breakthrough with the canter departs. (Which actually happened in the jump lesson a few days ago, but I can't remember if I typed it up and it's worth remembering, so...)... The darn left lead that always seems to evade me.... that I KNOW is my fault and not Dans, but I can't figure out how I'm getting in his way.... Well... Beth figured it out. It's magical! Instead of lifting my inside (left) hip to ask for the canter, I'm ultimately collapsing it in an effort to lift it. Kind of the like the "row" to release over the jump. I'm not sure what I'm doing to create that, but I'm shoving down first. So Beth told me to just sink my weight into my outside stirrup and she was right. I don't know if that just pulls my left seat bone up when I do that but I don't even have to ask with my inside seat bone... cause as soon as I lean into the outside stirrup a hair, he lifts into a lovely canter. :) I really do think that by doing that it in effect lifts my inside seat bone. :) So whoo hoo!!! We got some really nice canter work and then we got interrupted by Lucy, which was fine, because it was some good work and Dan and I were both a little tired. So we quit with that.

Then I went home and turned them out and worked on getting my trailer ready for Gibbs and Beth camp. I put the mattress in, moved the fridge in. (I think I'll see how much I use the fridge and if I like it or not or need it before I decide for sure.. and then I'll decide if I need to buy another one or just use the one from the feed room or... ). I hung up a few things.... and cleaned out the tack room and then added a few more things to the trailer that I'll start to need now, like chairs, my show halters, etc. It was a great day! 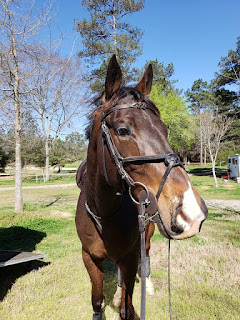