It was a lovely sunshiney day and we had a great ride. We jumped and worked on some things and dusted off some cobwebs. The first half of the ride Dan was a little lazy and behind my leg but he suddenly perked up mid way through and got bold and a little bit sassy. :)

We started out working on me and keeping my crotch in the saddle but my butt back. We did some jumps and Dan was bored. Beth said that he needed to open his stride but stay connected so we did some bending lines. It was fun and we managed to do somewhat okay. Dan had to stay in front of my leg and stay connected. When he wasn't connected, he jumped very hollow. But when he stayed connected he jumped round and up into my hands. It was a much better connection and created a much better jump. But in order to keep that connection I had to use my leg. And I had to release then because when he was using his back, he had to reach. So... it worked though. His jump improved and between the fences improved.

Then Beth noticed that Dan was really falling in on the right shoulder (seriously Dan... cause it was the left shoulder recently... sigh) so she had me almost leg yield him out to the left to get him from leaning in. Inside leg to outside rein. I really wanted to counterbend him, but that was not the right answer. So we got him upright on that shoulder and his jump improved.

And he had a blast too. He's acting like normal Dan again instead of grumpy Dan. Much happier and cute and almost snuggly but still cheeky. He was lipping on my shirt today and pants... essentially baring his teeth but not using his teeth... like a sassy little boy. I'm so excited that he was having fun today!! 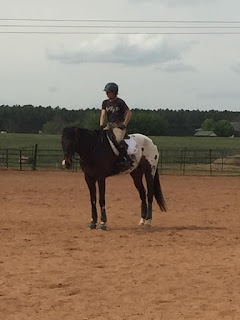 And then... I saw this photo and posted it saying that Dan needed his own facebook page.... 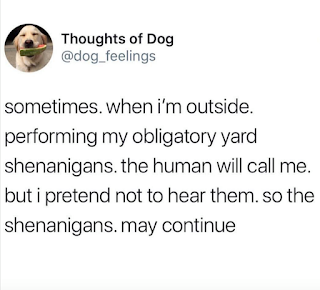 And then literally ten seconds later I went in the kitchen and saw this...