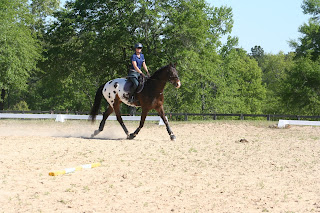 But it all worked out in the end. I was originally scheduled to adjust Johnny on Friday, but Elisa was nice enough to move it Thursday so Dan and I could haul to Gibbs Friday morning and ride Friday. Unfortunately Elisa and Johnny were coming back from Ocala that day and so it ended up being late before I got home. I think I got home at 10:15 pm and when I brought the ponies in... I heard "Clip, Clop, Clip, Thump".... REALLY DAN!?!?! And of the course the missing shoe was on the right front foot. Ugh... 10:30 at night.. and the plan was to leave at 7:30 am. So... I texted Freddie apologetically.... And apparently his phone had died. BUT... he got the message in the morning and texted me right back and when I told him I was hoping to leave around 8, but was obviously very much at his mercy.. he showed up at 7:45!! Yahoo!!! So... while we were waiting, I hopped on Fleck bareback (because I'm a horrible mommy and left him on HIS BIRTHDAY!!! so we went for a nice little bareback hack to try to find Dan's shoe to make it easier on Freddie... and Danny was a goofball and went bucking and sliding around.... luckily he didn't lose another shoe!). So.. we never found it. But Freddie came and put another one on and then pulled the left front forward a tiny bit so he didn't pull that one too. Yay!! 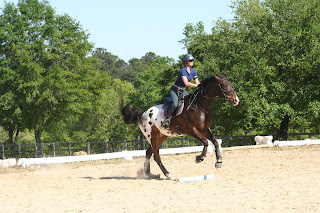 So.... it took me a lot longer than I thought to get diesel in the truck, gas in the generators and generator cans, and then get the last little bit loaded up. So... we didn't make our 12:30 ride time, but Beth said that I could just ride with her as she was going to jump Mighty through the same exercises after the other group. So... yay! That meant I could get him settled and let him chill for a bit and watch the others and then ride with Beth. :)

So, we rode with Beth. It was fun. She had set up some grids in and out of the dressage arena. They were small and skinny but we worked on keeping them straight and connected. It was fun. We worked on keeping him forward and straight and between the aids and "on the bit" and it helped him jump better. We even did some angled stuff. Dan did better than I sort of thought he might given how long it's been for both of us. And I guess I did too. :) 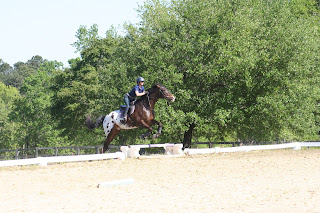 We then had a skinny made out of the "blocks". It was a tiny 2' pole hovering on one of those blocks. We had wings to start and it was in the corner of the arena and dealt with terrain. The arena was flat (obviously) but the outside was on a slope with a bit of a tough line. In the sense that the line sort of teased you into cutting the corner off too much. So... since they are greenbeans, Beth said that we were going to be very nice and polite and help them figure it out. We walked them up to it and let them trot over it from the arena end first... so there was no terrain. It was a bit looky at first but with the wings attached they were pretty cool with it. Then we did it down the hill and they were both pretty fine with it. It was a tougher ride and Dan and I missed the distance a few times, but we figured it out. Then we took the wings away and only approached it from the flat side. That did not go as smoothly as I expected. Beth said that we are trainers... we are training them to understand the question. And it was clear that both horses were confused, not being naughty. So we tried once and they didn't understand. So then we put up the wings again, went back over, praised them, and then took one wing down. They got that pretty quickly so we did that a few times to put money in the bank. Then we tried once more without the wings and even though it wasn't perfect, they both went over it. Lots of praise and then we quit. I'm not going to lie.. It was kind of cool to have Beth teach me like I was "a trainer". I mean... I know in some ways I am Dan's trainer and I need to really think that way, but it was just a nice confidence boost the way she did it. :) 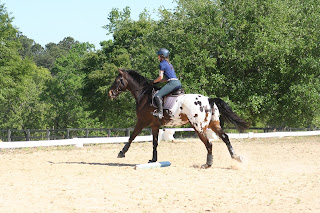 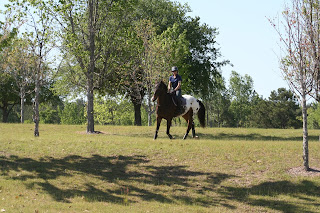 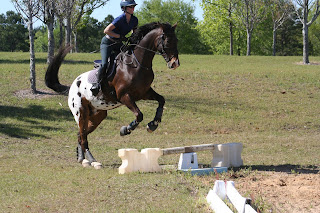 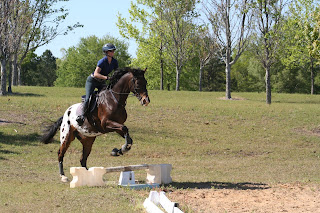 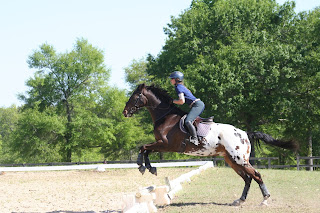 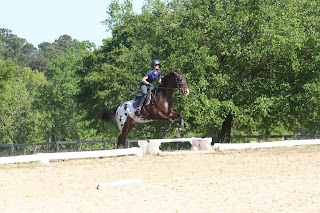 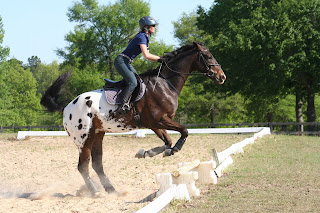 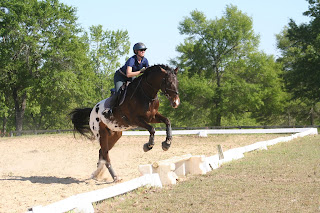 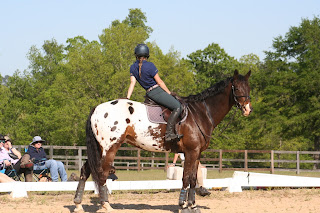 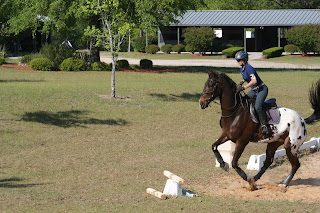 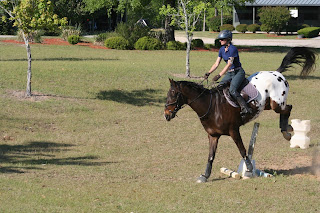 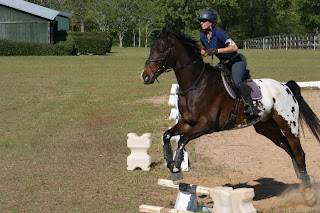 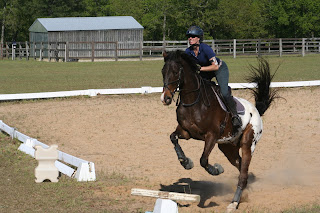 And then.... it hit me. We were here!! We were XC schooling all weekend!! YAY!!! It's been such a long 7 months and now... I was just so happy to be here and getting to play again! Danny was a good boy and settled into his stall and I settled into my new "bedroom" after some dinner. :) My cowboy shower worked pretty well, though I have some kinks to figure out. But not too bad. And I got the generator figured out and my bedroom was wonderful :) It was super comfy and the heater worked great. Although the light on it was super bright but once I covered it up, it was good. So yep. I'm digging my new digs. :)
Posted by Holly at 7:20 PM