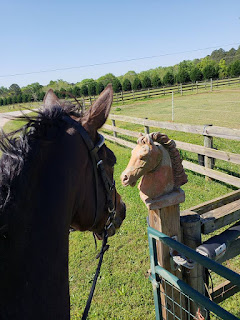 Today was a tough day. We had a tough ride. There was some good moments and then.. there was a lot of bad moments. Well, really, I guess most of the ride was good but then Dan had a flat out full blown temper tantrum. I guess. I'm not even really sure what started it and why he was so mad. We were working on getting him to lift at the withers and use his back. Tickling him with the crop is the current aid for getting him to lift his back and leg means go forward. And we were doing fine. Then Cindy said that I had the bad habit of bracing against him when he inverted and got a little braced and then using my reins to get his head down. She said that I'm getting his head down but he's still braced and his not using his back that way. So... instead, try to tickle him and get him to lift his withers and that will in effect soften his head and get him on the bit. So that's what we were working on. And it sounded like I was making progress.

So then I had mentioned that I would love if we could work on the trot lengthens. Cindy had said that he tends to push from behind but isn't lifting the withers up and really pushing off the ground with his front feet. So the plan was to go across the diagonal and use my leg and the crop on his shoulders, in unison with the trot, to get him to lift and get fancy. I'm not sure if it started before I used the whip, because of the whip, or because of my leg, or because of something entirely different, but Dan bugged out! He went across the diagonal and turned into the flailing, bouncing, head flinging, tongue flinging from eyeball to eyeball to ear to ear, cantering in place creature. Cindy kept saying "Keep Posting... Keep the rhythm". ha ha... It was hard. And I was trying very hard to not touch his face when he did that but to push him forward with my seat and legs and whip if needed. And Cindy said I didn't, but... it was telling that it took multiple multiple times across the diagonal before he semi-settled. And it felt like it took 12 attempts across the diagonal. 12 times where he was a possessed demon child. Even Claire and Dagney pulled off into the corners to stare in horror. He would sort of settle in between, but as soon as we started across, he'd go into full blown tantrum mode. Sigh.. We eventually got a few good strides of lovely shoulder and wither lifted trot with his head on the bit, albeit not on contact. So we quit with that. Good grief!! I'm not sure where that came from, but... I hope it doesn't come back again anytime soon.

We did a cool down hack to enjoy the weather. :) 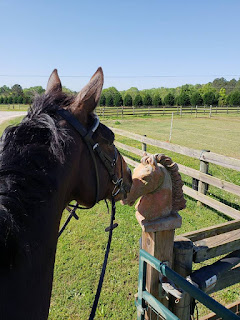 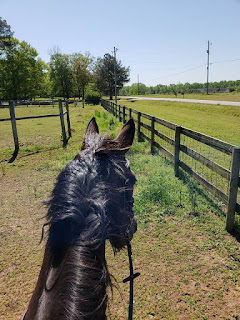