Impulsion for the Win!

Today was such a beautiful day! And I got to enjoy it at the lovely Silverthorn Farm. Dan and I hauled over for a lesson with Kelly. I am so grateful that I have three awesome instructors in my life. I adore them all. They are all very similar in what they teach, with slightly different ways of teaching, and they are all so supportive and encoursliaging. I love it! 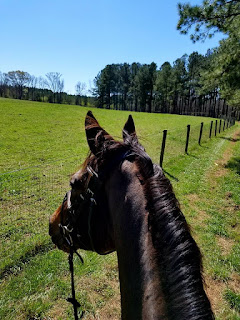 Today Kelly asked how things were going and I told her that despite my best efforts, he still felt sluggish and behind my leg. It was better at times, but.... it was still a struggle. Then I also mentioned that our leg yields needed some help, especially to the left, and that our lengthenings were more "fastenings". So we started the lesson by getting him in front of my leg. We went back to the whip with Kelly in the middle being the bad guy. But Dan loves it. It's a game to him and he LOVES games! So.... I asked and then sat quietly while Kelly encouraged him and got the impulsion without me having to nag constantly. Then I could ask once, politely, with my leg and if I didn't get a response, Kelly would back me up. Dan is tough. It sometimes took a lot of encouragement from Kelly before Dan would react at all. Ugh.... Irish! So then, we asked him to walk and Kelly got after him for a few minutes. She then explained to me that he is trotting nicely, but then as soon as we get the downward, despite having a nice downward, he plops to a cruddy walk. That is no longer acceptable. So... she got after him to let him know that we expect more and there needs to be a marching walk! I need to think of him being an upper level dressage horse, not a trail horse or even a hunter. March! So... we got some nice work and he was actually really lifting his back and using himself and staying round and supple and I wasn't having to nag/kick every stride. It's hard for me too. Because I'm so used to kicking and kicking... #ineffectuality (Thanks Eventing Granny!). So we talked about how I need to draw three lines in the sand. The top line is what I expect... every ride... every time. It is the ideal! I want the impulsion, I want the forward, I want the supple, I want the lift. And he can do it. WITHOUT the nagging. So.... I ask... if I don't receive, I ask again with more repurcussions. When I get it, I reward! He's really a smart kid and he gets it. I just have to remember to keep up my end of the bargain. The second line is what is acceptable, but barely. If I ask for a trot, and he skips up into it without me doing more than just whispering on his sides and we maintain all that lovely connection and energy, that's the first line, the ideal line. If I ask for a trot with a whisper and he trots, but it's more of a sluggish trot... is that good enough? Not really, that's below the acceptable line. So I deal with it and get a response that is above the acceptable line. And that's the middle line. The reality line. ;) I may whisper and get a nice trot, but it may fizzle slightly after a stride or two, or maybe it's nice, but not lovely. So then I add some leg and encouragement and ask for more brilliance. And we work on slowly getting the reality line up to the ideal line more and more frequently. And the lines will blur at shows. At home... I really fight for the ideal line. At shows, I'm a little more allowing of the reality line. 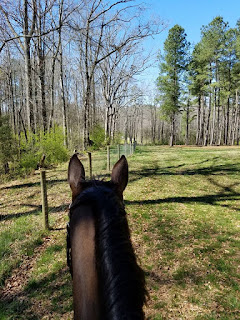 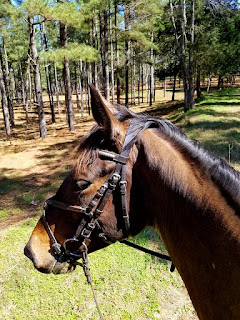 So then we worked on the "tricks". I got Dan on a 10 meter circle and got him tracking nicely and energetically and ... he felt great!! His back came up and he felt taller!! So then we spun off a bit and did some leg yield. And lo and behold, it was so much better! Ha! Shocker that the impulsion would help him reach under with that right hind and use himself better. ;) Our second attempt was a bit less lovely but as he and I lost it, I was able to correct it quicker. So not bad. :)

Then we went to the lengthenings. :) We did one for Kelly to see and she said that his back end was actually good, but his front end wasn't keeping up with the hind end. Which I took to mean that he was energetic in the hind, but kind of weak in the front. I think I was allowing with my reins too much and letting him drop onto his forehand in an attempt to lengthen his frame. We talked and... quite frankly, he's kind of long and huntery already... So I almost need to think of riding a medium trot with him rather than a lengthened trot. He needs to lift his shoulders and almost fling those legs out...rather than drop onto his shoulders and pull himself along. Kelly told me that it was going to get super ugly for a few minutes but to have faith. ;) She wanted me to do 5 diagonal lines and lengthen. If he didn't really strut... I was to use my stick and encourage him to really go. It didn't matter what he did as long as he went forward! So... we did. And she was right, the first one was ugly. He barely changed and then I used the stick and he broke into the canter but it was forward! The second one was the same but with a bit more sass. The third one got really ugly as he really didn't want to try and then kicked out and bucked. BUT... the fourth one he tried and he probably would have been nice had I not given the reins too much and allowed him to break. The last one... we got a really nice lengthen!! It wasn't consistent and it wasn't beautiful the entire way, but.. there was some really nice steps! Oh, and the trick for me was to push when I sit and half halt at the rise of the post. But yes, back to the last lengthen! He really felt like he sat and flung his shoulders out and strutted! I told Kelly and said I'm sure he wasn't really doing it like the fancy dressage horses, but it felt great. She said, he actually was strutting. :) Yahoo!!! So we quit with that. 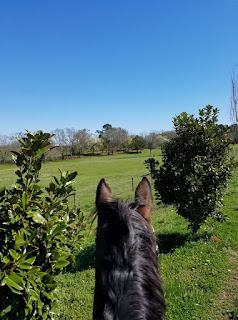 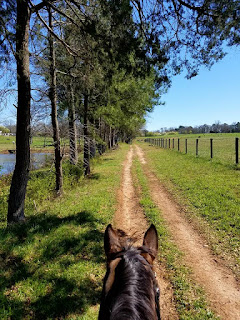 And then Dan and I went on a quick hack around the farm. It was so pretty out. We did a few canters and some trotting. And he was still quick off my leg for the most part. :) yay! Then when we were heading back as we went through the gate, a little piece of tape in the breeze caught his eye and spooked him. He almost spun and bolted but I caught him and made him do through the gate. He tucked his butt and bolted through the gate. Hee hee. I'm glad he's feeling fresh! :) Then when I made him look at it he was embarassed at how the little piece of tape scared him. ;)

After I untacked him and told him how great he was... he was kind of snuggly even! Awww.... I love him!! I really think he likes Kelly too. It's a game for him and he loves games!