So..... hmmmm..... We had another lesson today before our vet visit. Cindy worked him hard. Lots of cantering. He felt good... I didn't feel the actual hopping thing, but he still felt fussy and pissy. He was trying though. And he maybe felt a bit more animated and less sluggish. But just fussy. Cindy Adcock came to watch and said he looked great. Which is lovely to hear, but he just felt fussy and resistant and not harmonious. :( We did tweak his saddle a bit which will hopefully help. And... I'm so flustered now that I can't remember what I learned in my lesson today. :( Sigh...

So anyways... I did that, then worked a bit, and then we had our vet appointment. First... I'm super proud of my lameness skills. Because.. I was right! And... Danny is a twit! We ended up riding in the "arena" down behind the old barn so that Dr. G could see what I was feeling. Although he did look at my video and already had it figured out based on the video, what I said I was feeling, and the dent in his shoulder. Anyways, I picked him up to start working and he suddenly spun and bolted and almost ran over Dr. G and almost dumped me. In his defense, there was some deer that had bolted. Sigh.. that's not embarassing at all. ;) Thanks Dan. Good grief. And then of course he was on edge. But we survived. So... Dr. G ultrasounded his shoulder and sure enough... no bursitis, but the tendon and the muscle were hamburgered. :( Sigh.. So we shockwaved it. And we shockwaved the crap out of it. And.. funny story... I had to run to the house and asked Dr. G to "tame the beast" while I was gone. I came back and Danny got fussy and Dr. G said "I really hate to tell you this, ...especially you, but... he stood like a statue the whole time you were gone". Seriously horse!?! Ugh. I laughed and told him I thought that Freddie was coming early now because he hoped I wouldn't be there so that he'd behave better. Anyways... we shockwaved that shoulder and he said to go ahead and ride but that we should probably shockwave him again in 3 weeks. Then we talked about his right hind. He felt that the hematoma wasn't an issue but that there was a bit of stifle issues. We ended up injecting his stifle, mostly because I wanted to start jumping so I could prep for Gibbs. He said that ideally we would work on getting him fitted up and doing hills before we started jumping, but said that if I kept it small and slow and steady, it was fine. But the injection would help that. I don't know if he realized how much work Dan has been currently doing. Although to be fair, I do need to up my hill game. 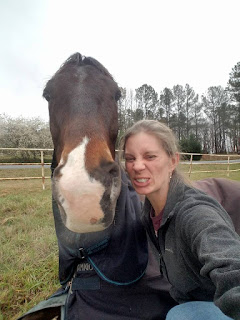 SEE... SO ANGRY!!!
And.... so, I mentioned how ANGRY Dan had been the last few days. Like going after horses in lessons, extra cranky to be around, extra cranky to tack up. That morning he even half lifted a leg at me when I went to undo his blanket straps. Then seeing him spin when I was riding... Dr. G suggested that perhaps I consider estradiol for Dan. He said not only would it tighten his stifle ligaments but it would also help with the ADD and anger. He said it would make him much happier with life. So.... I'm debating it. I just worry that the anger is pain related and I don't want to just mask it. But I figured I'd see how he responds. I also worry that maybe he's just as frustrated as me with the not jumping and not doing... or responding to my feelings. Sigh.. I know... he's a horse! 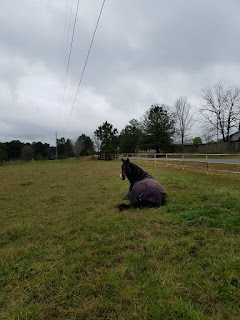 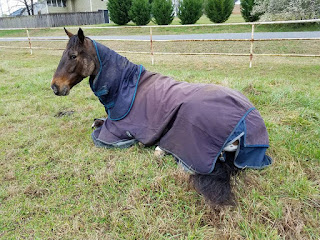