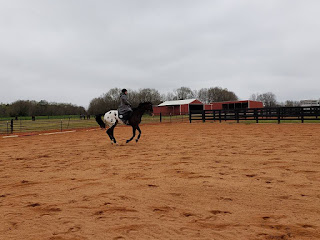 I have great friends. And God is Great! 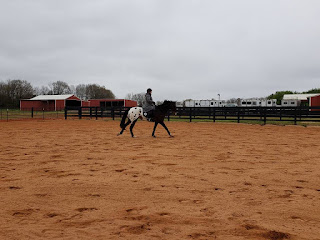 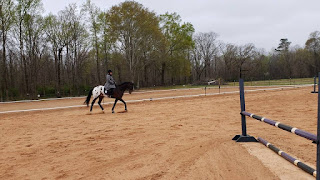 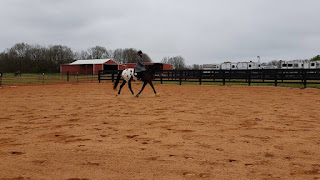 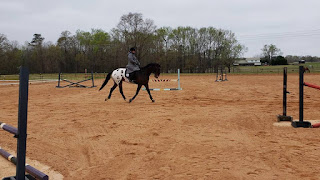 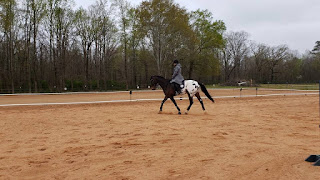 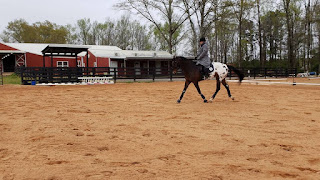 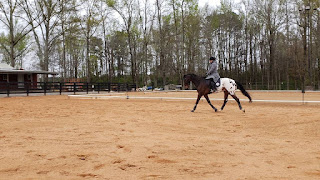 Beth said she would ride Dan so that we could see if he was really lame or if it was just me creating the lameness. So... I hopped on first and walked him around and did a tiny bit of trotting to make sure he wasn't feeling super frisky. :) He was fine. He trotted around on the buckle like an old hunter. So I let Beth hop on. (Not that she couldn't handle it... not at all. Mostly because I didn't want her to have to deal with any shenanigans because I wanted to get to the root of the issue. I wanted answers!)

He was good for her and she started trotting. I could see the lameness. And it was still in the front end only. (I thought anyways). It looked very much like he just wasn't pulling that front right as far forward. However, he wasn't really head bobby like I felt like he was with me. So... she was working and then my phone rang and it was Dr. G. I answered and we talked and basically he said that it was fine to keep riding and working him. He said that I wouldn't do any irreparable damage. He also said that I can jump but that I should ideally avoid it for as long as possible but still be able to prep for Gibbes. So that put me at ease. So Beth kept riding him and the longer she worked him, the sounder he got. She said that she felt it at the beginning, but it was more of a tightness than a lameness and that she felt it go away after a few minutes in. She thinks it really is a connection issue. And sure enough, he did look pretty darn good.

So... between seeing him go and seeing him be 95% sound and not head bobbing and hearing Dr. G say that I won't make him any worse... I'm feeling much more optimistic now. 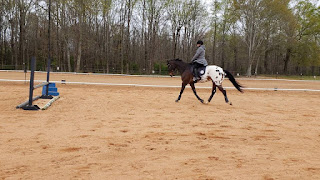 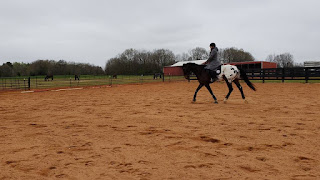 Beth rode him for a little bit and then had me hop on. So... the things I learned today... (which are the same things I've been hearing from everyone, but.. I'm a slow learner) 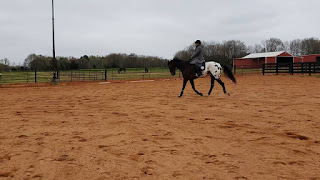 So yep... we worked on that and it was lovely!! Dan felt really forward and his back was lifted. And I had a solid connection in both reins. It was awesome. We got some really nice work out of him. And.... I didn't feel the lameness or the head bob!!! YAY!!! Well, not until the very end when he got a little tired. And it was very much a connection issue at that point. He was almost bobbing in and out of the connection. It's hard. And he was tired. So fair enough. And... as an added bonus.. he felt so good that I think my butt was staying in the saddle rather than being popped out of it. :) Yay! 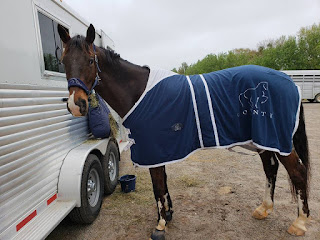 So yep.. I'm feeling a lot better about life now. Although there is still that feeling that it is very tenuous and we are still behind and I still suck. And then there is the guilt about how my happyness is tied up in my horse and being able to ride and do... and that's not right. But.... I have been praying that God helps me find my joy and happyness again. And of course, it would be great if it's because he heals Dan, but... mostly that I just find my joy and happyness. And as bad as I was feeling... it kind of had to be God. And maybe a combination of getting over my period.. the sun coming out briefly.... Good friends willing to go above and beyond and help and be there and listen and commiserate and help me feel better. But.... I'm going to say mostly God. So... hopefully I can continue to get happier and Dan will get 100% sound soon and....  yeah...

Danimal was a tired puppy! 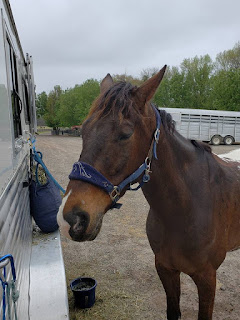