Today was a tough day. After my ride yesterday I cleaned out my trailer and pressure washed it and cleaned the windows and the carpets. It was all clean and empty. Today a client came and looked at it and bought it. Which is awesome....because I've ordered another one. I decided I wanted A/C and heat and a cowboy shower. Because I'm tired of driving to hotels and having to come back for night check. And for awhile, most of my friends went to hotels but now most of my friends have LQ's, so... I am losing my hotel roommates. ;) And mostly, I'm so tired of getting migraines from being hot all freaking day long. So... I was going to just add it to my current trailer because I can't afford another trailer and another truck. And I was afraid that the minute I bought a new trailer, my truck would die. But then I found out that a friend was getting out of riding and was selling her truck. And it was at a price I could afford flat out. Which meant I could then finance the trailer. So.... after much deliberation, I decided that I wanted more room in a trailer. And that led to lots of researching, but ultimately I decided on a Adam 2+1 so that I can use the DR as my room and the +1 as my tack room. Hopefully it'll pan out how I planned. So.... point being... I am now the proud owner of a 2003 F350 diesel dually! It's in great shape and an awesome beast. (Though the radio is possessed and the turning radius is a bit larger than Bart's). And then I ordered the trailer. So soon I will be the proud owner of Adam, my 2+1.

Anyways, after spending all day cleaning up Morty yesterday.... a client came today and bought him. It was a bit sad saying goodbye and watching it drive away. We had a lot of good memories in that trailer... Lots of fun times, lots of funny times. He kept me and the boys safe. It also means I lost my appy stickers and my beach stickers.

And then I went to visit Gramma. And man.... that sucked. She's so weak and still a bit disoriented. She slept most of the visit and seemed so exhausted. And it was painful for her to eat and she kept almost vomiting with every bite. It's just so hard to see her like that. But man I'm going to miss her. So that was really hard... 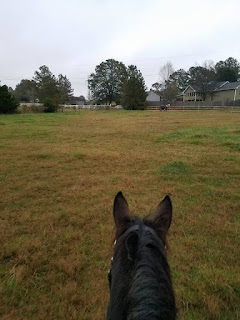 Back to horses now... cause this is my horsey blog. After visiting Gramma I took the truck to CarMax and they offered me a great price. So... once I unload everything, I'll get Mike to take me back and drop Bart off. Sigh.. it's going to be sad saying goodbye to him too. He kept me and the boys safe too and only stranded me once... and that was right in front of the mechanic. I'm going to miss him too. It's stupid though!! I mean, it's a truck and trailer. But... lots of good memories in those two. Oh well, I'm sure that Sally and Adam will help me create a lot more fun memories too. (I'm debating but thinking Sally for the Ford).

Anyways.... since I no longer have a trailer, that means riding at home. It was misty and cold and damp and miserable out. And I was feeling blue because of Gramma and the truck and trailer and I almost wimped out. But I didn't. And I'm glad I didn't. I hopped on Dan bareback and we headed out to the front field. We did a good bit of grazing but did some work too. And I tried to keep him walking. We did some dressage and tried the turn on the forehand and turn on the haunches again. I got a decent bit of work from him, some tongue tantrums, and some fussiness, but no naughtiness. And Fleck got to graze. So yep... It made me feel better. And I'm excited about the new rig. Just still sad for Gramma. 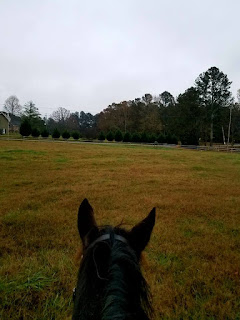 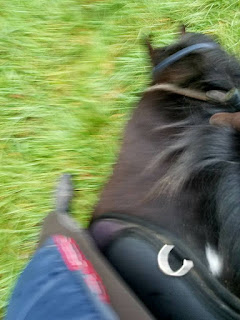