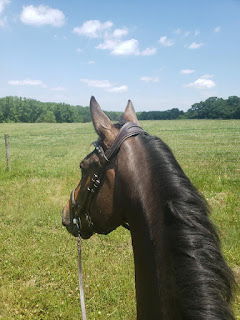 We're rockstars!!! Grand Prix bound! Ha ha... But seriously... Kelly lessons always leave me feeling like we conquered the world. :) We opted for dressage today since he had jumped all weekend. I told Kelly that I didn't have anything in particular in mind, but that me and Cindy had been working on getting him to sit and engage. So... we got some nice trot work and then went right into canter pirouettes!! EEEEKS :) 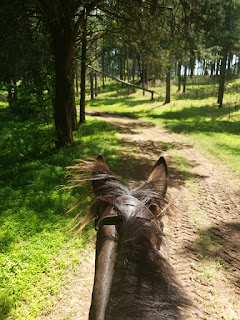 She basically had me get a nice canter and then get a nicer canter. She wanted me sitting up straight (even in the transitions.... and "There's no jumping in canter pirouettes so WHY are you in two point Holly!"!) and keeping him really engaged but shortening the canter and getting him super rocked back and slow in the rhythm. Then after we got that, we used the rail or a jump to be my "bumper" and do a 1/4 turn pirouette. The goal was to get him sitting and waiting. There needed to be the moment of hesitation in between each step. And man... that is HARD! But such a cool feeling when you get it AND you don't stall out! It did help to do a little tickle with the whip as we started into the pirouette. So after we did that, we moved to half pirouettes. She had me start down centerline, shorten the canter and almost at the rail, and do a half pirouette. She said ideally, we'd end up not too far off centerline, but.. to start, we could easily end up at quarterline. And to then just half pass back to centerline. Um... okay, again... assuming we know how to half-pass. ;) ha! But... we got a few decents steps!! A lot of not decent steps and a lot of falling out of it. But.. some really good steps! Oh, and I must open the left rein. I keep wanting to cross his neck and I'm blocking him. (Sounds familiar huh?!.. leg yield, half pass, canter depart... darn left hand needs to back off!). 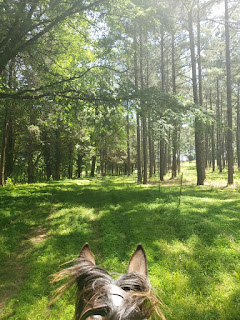 It was so much fun. And we talked about it being body building/weight lifting. So that in an effort to build the muscle and strength, we almost needed to do it consistently/daily. As long as I let him have a stretch after every couple of attempts, it would help build him up. And that it was better to do small amounts each ride rather than drill it for one ride, and give him a week off, and drill again. Like weight lifting. :) 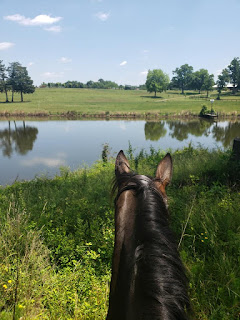 Then we went for a short little hack around Silverthorn because... it's my day off and it was a pretty day and...  yeah. 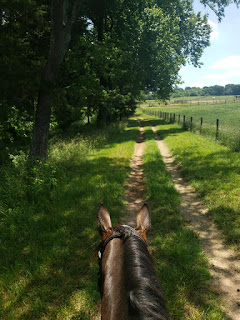 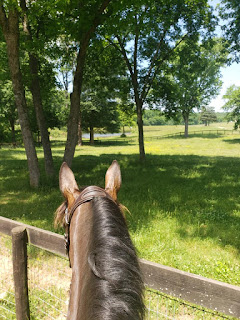