Bless him. The kid is a good kid. I've always said that. He's sassy and athletic but he's got a good heart. And I did appreciate the recent shenanigans.

But... so... since I'm pretty convinced no one reads these but me...
This is going to get gross and poopy.... TMI type of post.. so feel free to scroll the pictures and move on if you are a random person who does in fact read these... 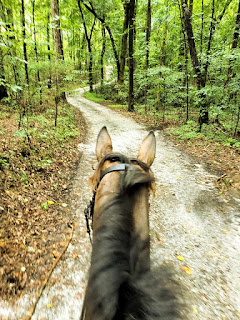 I have not been feeling well for 5 days now. It started last Friday when I went to bed. I had like 8 bouts of explosive diarrhea overnight. I wasn't actually sure I was going to be able to show at Silverthorn. Luckily, the pepto and not eating anything did the trick. However, it has persisted and I have had at least 15 visits to the toilet each day with liquidy explosive diarrhea. I haven't been able to eat anything because my guts are in knots and when I do eat, it "releases the hounds" and I have to run to the toilet. So... that was part of the reason I was so cranky during my Tuesday lesson. In fact, Tuesday night... I had to run from the barn to the toilet and really.. didn't make it. (Mostly because Mike had left the lid to the toilet down.... I came SUPER close... but still... crapped my pants. :( ) So.. I decided enough was enough and I started some metronidazole. Wednesday was a long day. I had 7 to 10 horses to do at one farm and then another 2 at another farm. It was a new farm and I had no idea if they had a bathroom. But I didn't want to cancel, so... I went. I took two imodium and it worked. I was safe. However, I felt nauseous and weak and not normal the whole day. At one point I almost fell off my step stool. I managed to get those 7 horses done (thank goodness they were fantastic patients and she had me in the barn in the shade with two fans). I ended up cancelling my last two patients and figured I'd do them tomorrow, when I was fresh. I came home and tried to eat something. Nope. All I had gotten down was a banana and an applesauce and a tea. I think I ate a little bit of taco's that night (cause.. you know... I actually was really really hungry... it just was going straight through me). But yep.. it came out the other end quick. So... Thursday I woke up.. cancelled my jump lesson with Beth and thought I might be able to rally and at least do a trail ride. Nope.. I felt awful. Like... weak. I had to rest multiple times while trying to feed the horses. Spent most of the morning on the couch. I finally got Mike to take me to the walk in clinic before lunch. They started me on cipro and we came home. I took another nap, cancelled my patient that I had attempted to postpone to today, and then went out and got my pills, more gatorade, bread for toast, and some probiotics. 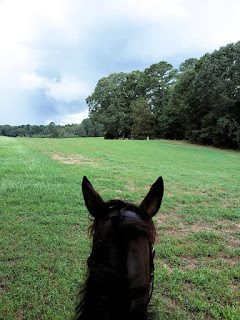 So then on Friday... I had to cancel my patients again for the day. (I let them know yesterday). Luckily they are awesome people and forgave me. So I fed ponies and then slept some more and tried to eat some blander foods. I actually managed to not have explosive diarrhea too bad so I finally decided I needed to go ride. Danny was SOOOOOOO bored and getting frisky and I didn't want to die if I waited too long to ride. And I know.. I should have seen patients instead but... dangit... I missed riding yesterday... and at least I could go do a short walk about and if I had to use the toilet I could jump off and poop in the woods. Plus I figured one 2 hour endeavor beat driving for 30 or more minutes and seeing people and having it be awkward if I suddenly had to run to their restroom. But yeah..  I still feel a little bad. 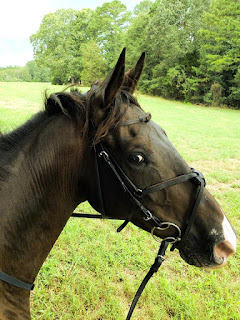 But... I really just had to. So I got gas in the truck first (with Dan) because I figured if I couldn't make it through that, we'd just come home and at least he had a field trip to help occupy his brain. But... no poop stops, so.. we headed to Ashland.... and the dark giant cloud that looked like maybe it would stay just out of our way. I put the jump bridle on him with the neck strap and asked him to just please please please be a good boy. I told him he could pretty much do whatever he wanted as long as he didn't dump me. 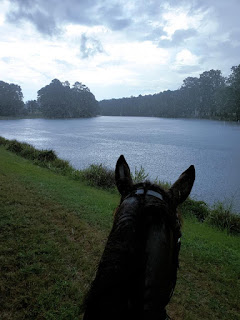 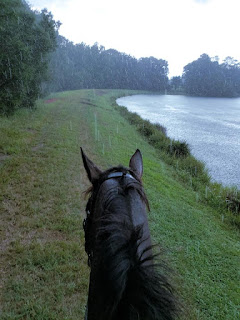 Our ride started hot and dry... and ended soaking wet! 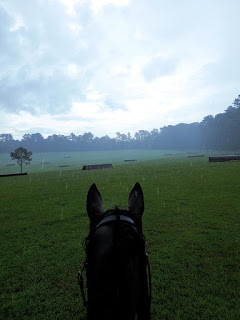 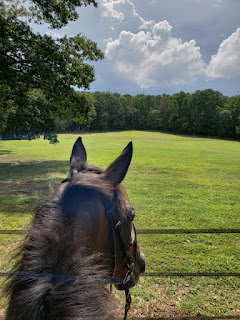 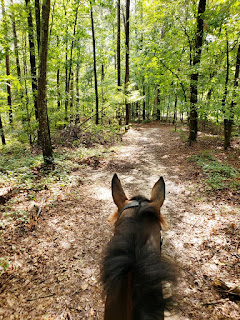 Of course when we got there he was all keyed up over something.. a deer... or maybe he saw the show canopy that they had put up for Sunday. He was on high alert and every bit of 17 hands. Then a car rolled up to help set up the show arena's or something. So I got on and as we walked through the wooded path to go to the trails, the car starts to follow us. Seriously?! I turned him around to see and she apologized. I let her pass us and Dan was a good boy. No freak outs. So then the dark cloud looks darker and closer but... whatever, I was already on. We walked down to the small pond and as we went to cross the dam we saw the heron. It didn't fly away... noooo.. .it did this creepy slinky scary walk into the words. Poor Dan. His heart was pounding. But he stood his ground and then we walked past the path it took and carried on. Good boy again! So then we walked around and did a tiny bit of trotting. Then I realized maybe that wasn't such a good idea but I wanted to let him move his feet a hair. So then we hear this noise... and yep.. it's the wall of rain heading our way. Sigh... Of course we are in the back hay fields. So we did a little canter through the rain to get home quicker. Then we tried walking through the woods... nope, not any drier. So then we cantered back up through the cross country fields and untacked quick in the POURING rain... I was soaked... he was soaked.. My tack was soaked... And came home.

And then I went in and tried to eat some toast and had more diarrhea. Sigh.. but at least I didn't have to get off while on the trails. I felt a little better too so maybe, just maybe I could see some of my patients tomorrow.