Today was quite the day! 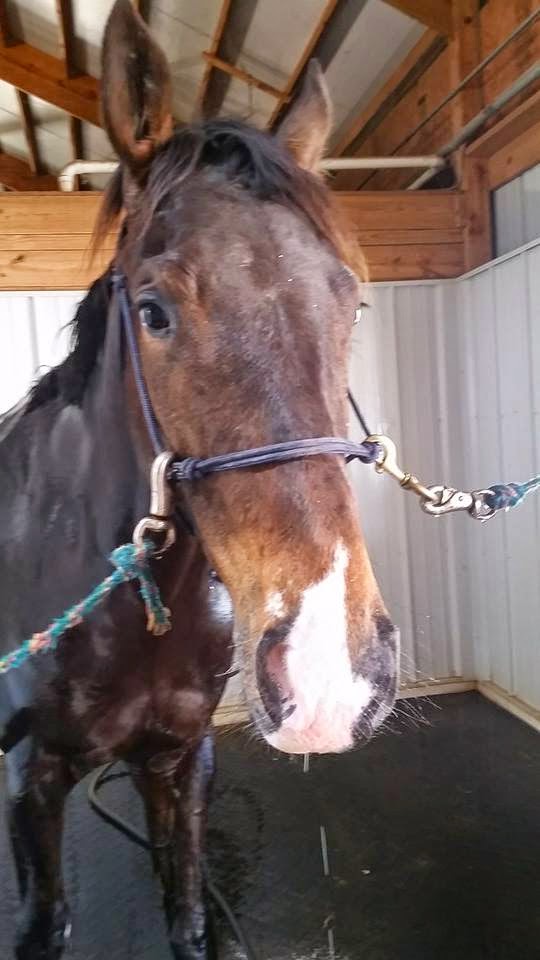 Danny and I hauled to High Point for our lesson. It was a gorgeous day - warm and sunny but with a fairly brisk wind. We parked up at the upper barn and Peri was parked down by the lower barn. Something spooked Tess and she got loose shortly after Danny and I got unloaded. Luckily she was good and didn't go very far. But it was sort of an "up" day/atmosphere. Then Kim showed up and we were chatting and suddenly Dan was walking away from me. I had put his halter back on him after Wayne fixed it. I didn't even notice him pulling back but the hay string was rotting anyways. So I walked up to him to catch him and he moved off a bit. He stepped on his lead rope, which then pulled his halter ring open again and so his lead rope basically fell off his halter. I was carrying the keratex as that's what I was doing prior to him getting loose. I guess I made the mistake of jogging up to him thinking he'd just chill. Only he didn't. He trotted off. Man.... And then the horses in the pasture started trotting, so then it was FUN. He ran amuck for a few minutes and it took like 6 of the high point crew helping to catch him. Then he reared up at me and made me spill my keratex... on my face!!.... while trying to beat him. ;) So, yeah.. he settled down after that and I finished tacking up. 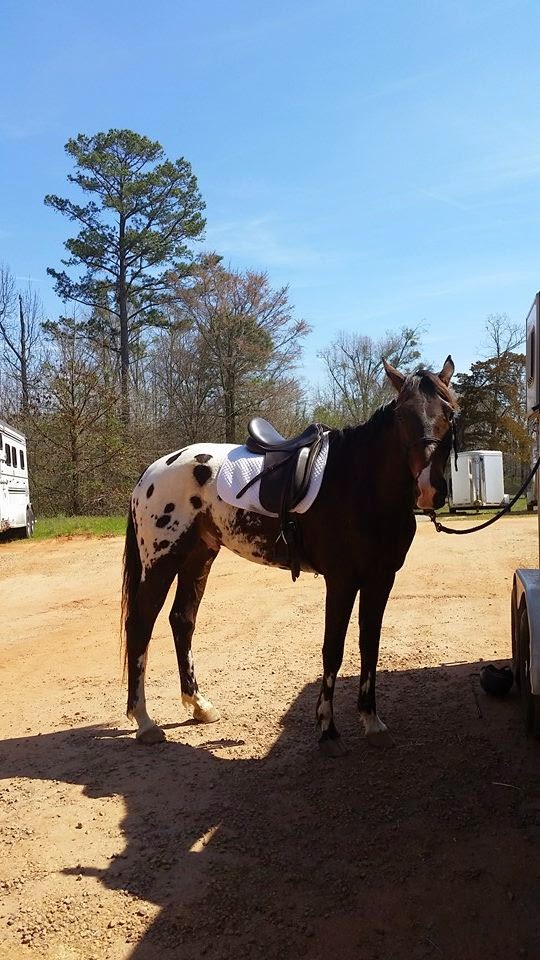 I decided to leave my spurs off for the ride. ;) We got down to the arena and they had opened up all the doors because the weather was so nice. And they were playing music. And there was a few people riding. But... Dan held it together and was pretty darn good. There was no antics. We had a good lesson. Danny and I were able to get a bit more work accomplished. I was able to take a little bit more contact and he didn't get behind my leg. I was even able to play a little with the outside rein. I was also able to figure out my left bend a bit more. So... the trick is a bit more complicated than just sitting in my outside stirrup. Cindy said that I need to be careful about locking my outside leg and kicking it forward. And I NEED some weight in the inside leg to be able to wrap him around it. So...
- sit evenly in both seat bones, but focus on LIFTING my inside (left) seat bone FORWARD and UP. Then keep my outside seat bone down without kicking my leg forward, and draping it back a little. I can't lock it and block him from going into it, so it just needs to drape. So... think of doing a canter pirouette on the ground, and make my body do that. ;) Sort of how I ride his canter... Or maybe exactly how I ride his canter.
- I also need to make sure that I'm turning my upper body. For some reason my upper body always wants to be shifted to the right instead of turning it left, like the direction I'm trying to turn the horse. ;)
Relaxing after his lesson 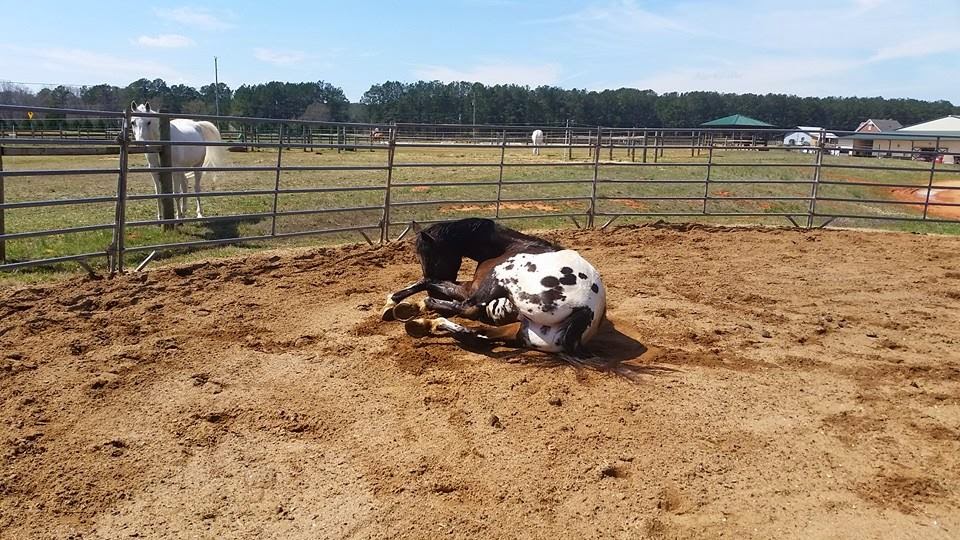 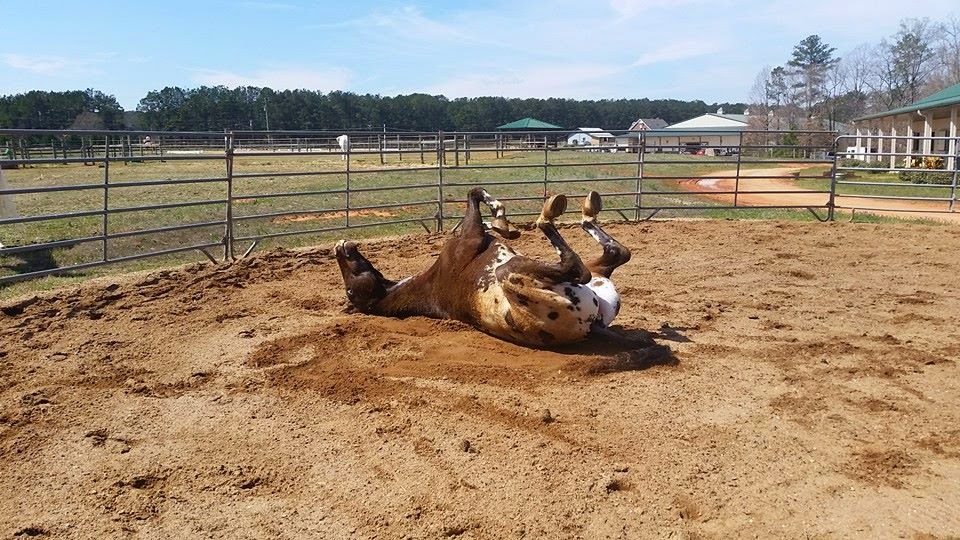 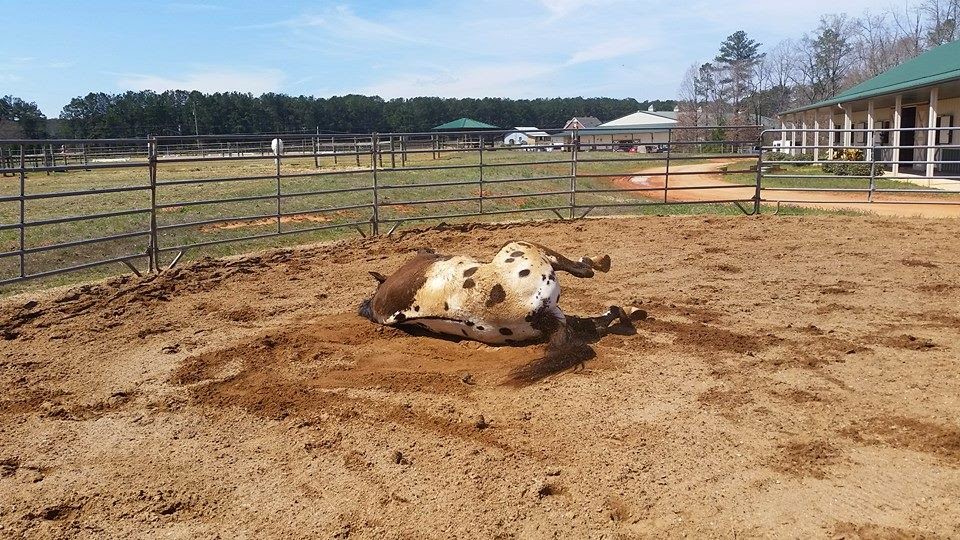 So yep. It was a good ride. So then I needed to adjust two horses. I put Dan in the round pen while I adjusted the one at High Point. I knew he would roll after his bath so I hung out a bit and waiting until he rolled. I was afraid he would roll into the round pen panels. So then I adjusted the one horse and went to get Dan as the other horse was at the Academy. And... noticed that Dan had half pulled off his shoe and the clip was stuck in his sole. What?! Argh. And of course, High Point had Dan out there doing vet work but he had left before I noticed Danny. Luckily though Wayne was just down the road. And despite it being stuck in his sole, Danny was barely lame. So he hung out in the trailer while I adjusted the horse at the Academy and then we went to the barn Wayne was at. 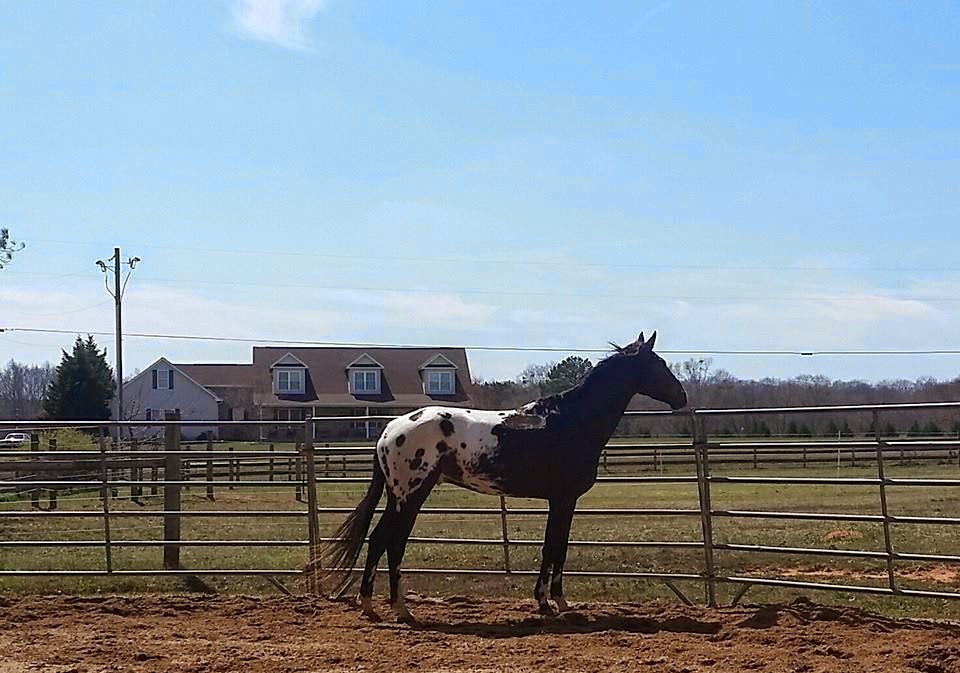 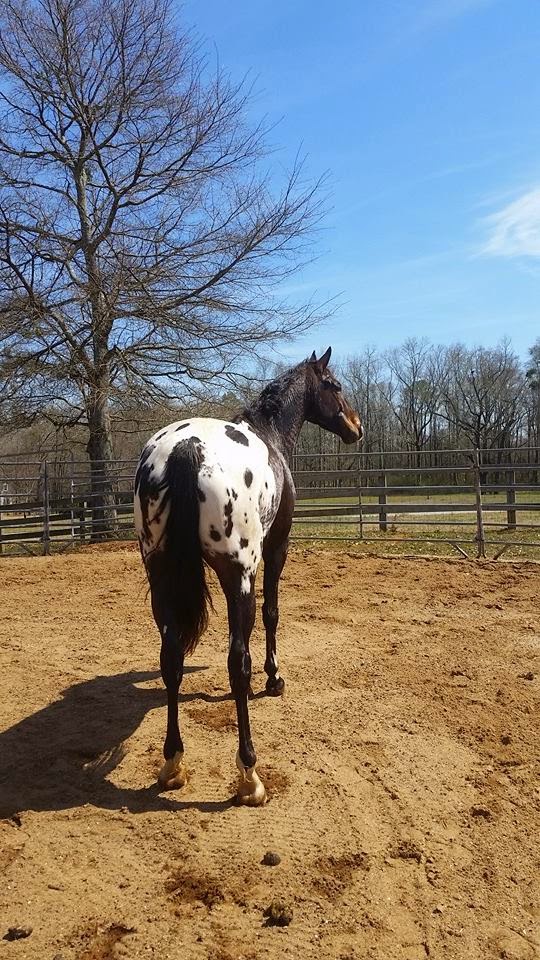 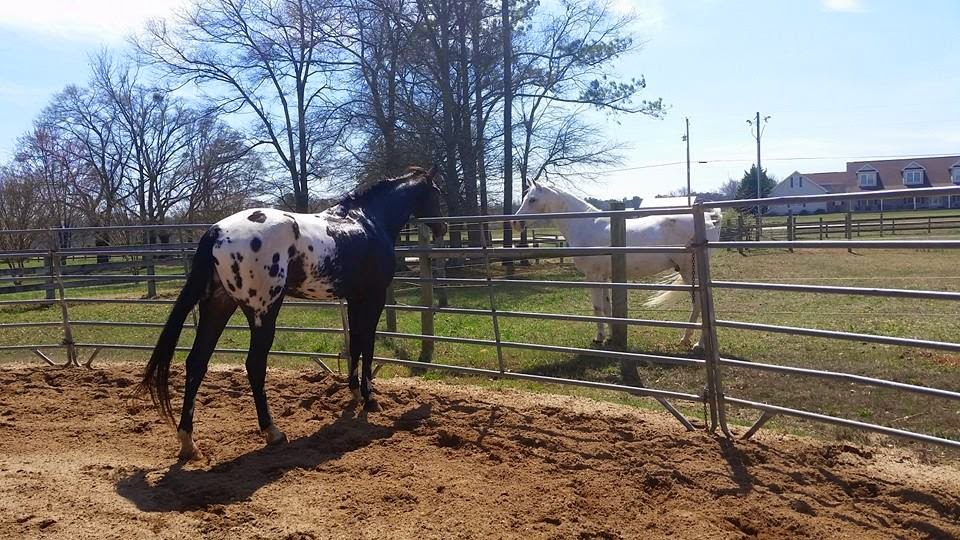 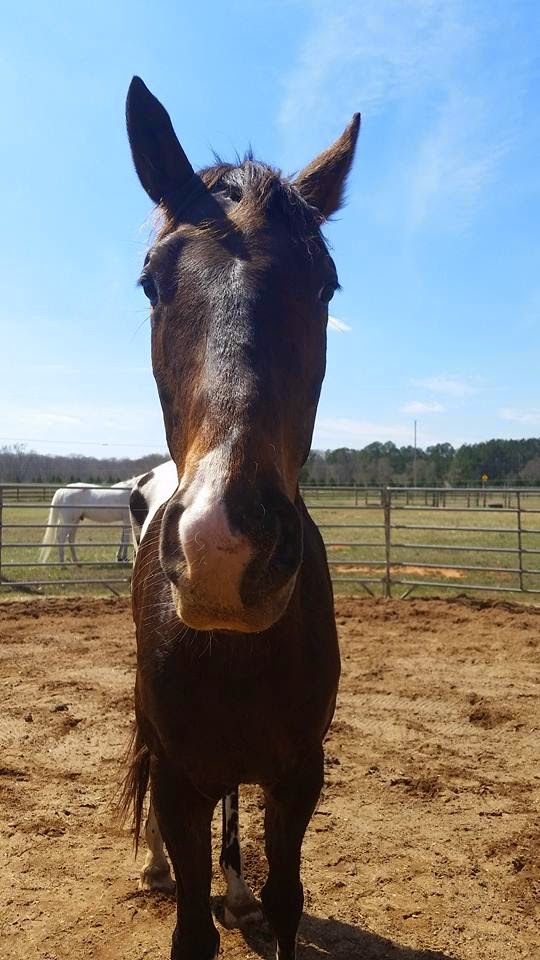 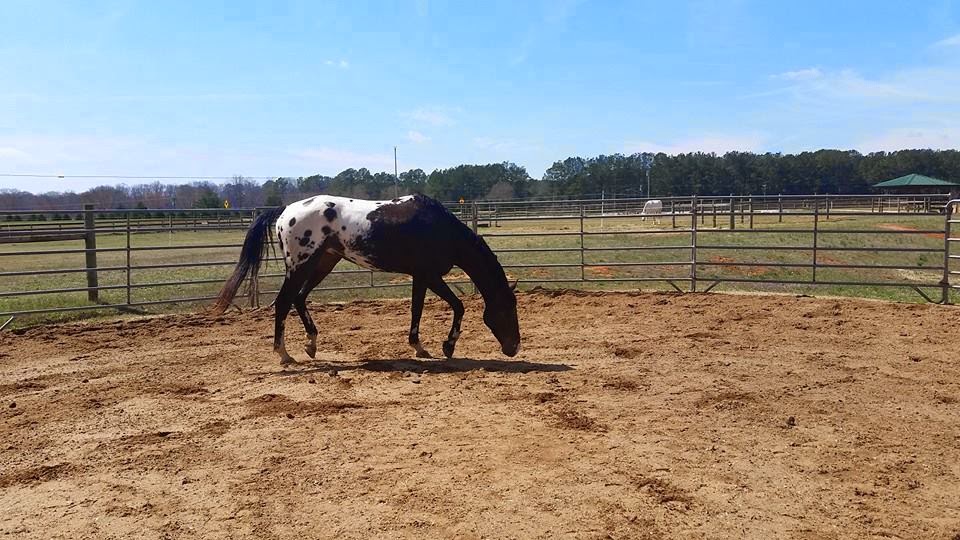 Turns out it was Kathy Jones barn. The same Kathy Jones that was teaching at Pounds and Huntcliff. Danny was a little up as it was a new place but was fine for Wayne and got complimented by the lesson kids. We got his shoe fixed and finally headed home.

Quite the day. Hopefully Danny will be sound tomorrow. There was a little bit of blood but it went into the white line and not his sole. So... fingers crossed! Tomorrow is all day at the day clinic for me but then Thursday we'll have a lesson with Beth. :)