Another fun day. The weather mostly held off again! Liz ended up riding at home instead of riding with us because she was afraid she was going to get rained on. But it still ended up being Me, Kelli, and Peri. The jumps were still set up from yesterday. Doh! My eyeball is so off. They were all between tadpole and beginner novice. Ha! Well, the one fence was a legitimate maxed out beginner novice, but the rest were under BN. Oh well. He was still good and was still getting more adjustable. :) 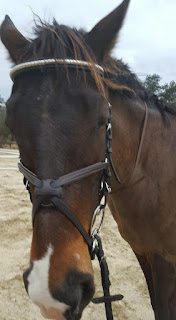 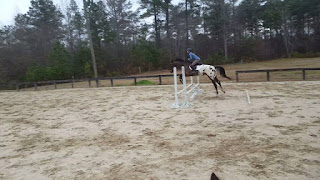 So anyways, Peri was feeling a bit nervous so we dropped the fences down to tadpole and amoeba level and took turns popping around them. Danny was super good today too. Me not so much. ;) I took a few fences to get my act together and messed us up, but Dan just kept trooping around. Gah... he's such a hunter!! Seriously.... he was like a metronome..... 1, 2, 3, 1, 2, 3, 1, 2, 3.... But he was figuring out the cantering fences part and even moved up a hair and held a bit to get a better distance over some of them. Yay!!! Baby boy is growing up. 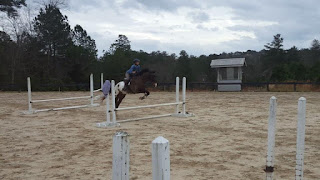 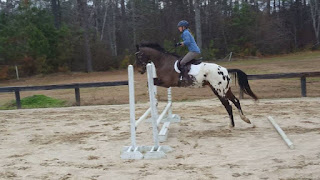 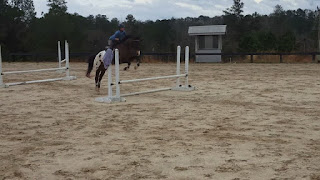 I'm so excited about showing him this Spring. Still not sure how we'll do out on XC. There's a little part of me that hopes he gets a bit more animated and really doesn't end up being a hunter. But I think we'll be okay. He loves to gallop! :) And he's still a ton of fun to ride.

Egads... get it together Momma!