What a beautiful day in December! We headed to Silverthorn for a jump lesson with Kelly. He was MUCH better behaved today than the last time we were there. :) I was actually quite impressed with how good he was. I rode Fleck first and then got on Dan. They were doing a birthday party and giving pony rides in the jump ring. I got ready a bit early and headed into the ring. I was a little afraid that he would run down a kid or spook the pony with his antics. (Ha! I'm teasing... I know he wouldn't run down a kid). But he was good. I made him do "crouching tiger" a few times before I got on and he was quite distracted but behaved. So I got on and he walked and trotted and cantered like a big horse with no antics. He wasn't even spooky about the potential of the goats to reappear. And then at one point the kids were all running in the fields and he didn't even give them a second glance. Just one glance and he carried on. :) I'm such a proud mommy! 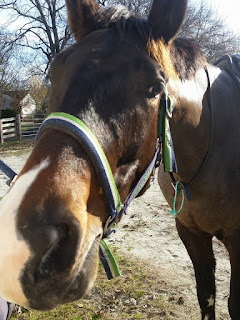 So we started with our flat work and Kelly had me do a fun figure 8 leg yield exercise. We came across the diagonal and as we changed the diagonal, I asked for a leg yield back to the "rail". The same when we came around again. It was a good exercise to get him into the outside rein. Good exercise for any pony. 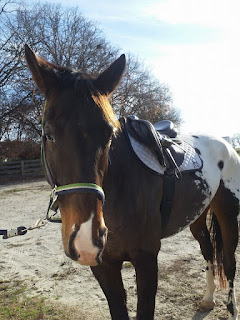 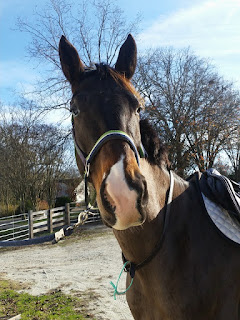 So then we started jumping. We just did a grid today to work on getting him to rock back and use his haunches and pick up the front end. He started the day off really not picking up his shoulders and just lolloping over.
The beginning 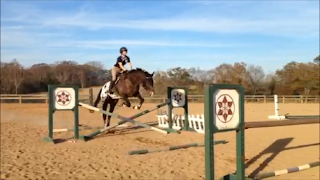 So we started to up the fence height in an effort to get him to pick his knees up, and also worked on slowing him down so he had to rock back. And... it worked. He started to get it. I'm most pleased that he seemed to learn as the lesson went on. He would go to fast (translate... I would let him go to fast or encourage it) and knock a rail or hit it. Then when we'd slow down he would pick himself up better. It was good stuff and encouraging.
The end 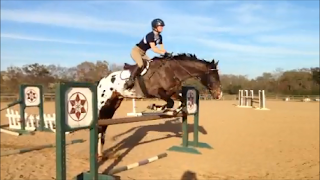 So our homework is one stride grids weekly. With bounce poles. AND... generous one strides. There's no need to compress him yet. He can take the long one strides while he's learning. :)

Such a good kid today. And... we got invited to hound walk :) YAY! Ha.. I don't think we were invited last lesson, when he was so naughty!
Posted by Holly at 6:25 PM