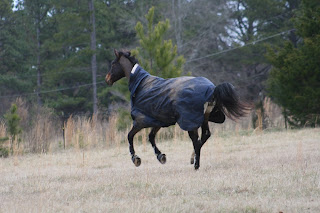 Today was a good day!! Dan got to be turned out. :) Legally. ;) He went out yesterday after his lesson so he behaved. So this morning I put him and Fleck out for a bit while I waited for it to warm up a little to ride. Dan tore out there and did a few little laps and then immediately went to grazing. :) He's a goofball. 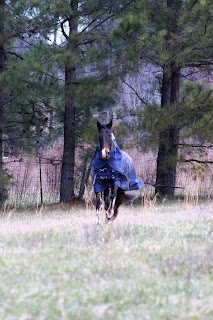 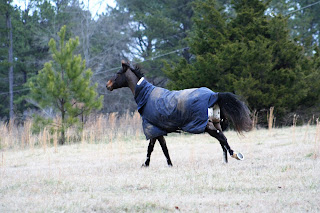 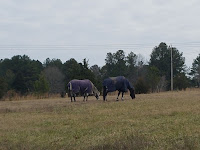 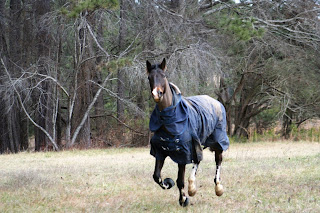 So then I took them both to Ashland. I thought I was meeting Julie, but I had my dates wrong. No worries though. It was SUPER crowded. Both Mary Bess and Lauren had multiple students on the XC field, in addition to a few random XC schoolers. Then Erin was teaching in the stadium ring. And one girl was riding in the dressage arena. So yeah... crowded! I think there was like... 15 trailers there. Ha! I figured that maybe I should do Dan first, in case Julie showed up (at the time I didn't realize I had my days wrong) and because it was finally warming up as the sun had come out. And I thought I'd time it right so that there wouldn't be a lot of people coming and going from XC. So I tacked him up and did a quick 10 minute or so hack to warm him up. He was goofy. He bounced up in the air a few times. Despite me avoiding the chaos in the XC field.

Then we headed to the arena to work on stuff. It was a little tough. I think I have some issues. ;) I wanted to work on multiple things. I wanted to get him in front of my leg without nagging. I wanted to work on not squeezing every stride, especially the wrong way. So I wanted to do some posting trot without stirrups to relearn where my leg goes and then practice that with stirrups. Then I wanted to start to practice the half halt thing I learned in the article... the "parade". And then I also wanted to see how Dan felt as far as the weird hopping thing, since it seems to be more noticeable when I'm left to my own devices. Oh, and I also wanted to work on letting go of the right/outside rein in the canter too, on specific spots in the circle. So yeah.... I probably should have picked ONE thing, but.. I made it work. At least I think I did. And I may have answered my own questions.
It was kind of nice really. We started at the walk and I worked on the half halt. Mostly just getting the timing down. Then we did our 5 minute trot right and then left and I worked on no stirrups to start, then worked on getting my leg in the right position and not squeezing every down stride. Then I complicated it and tried to do the half halt. But.. the article is right. It's REALLY hard to half halt and use your leg on one side as your posting UP. And the article does say it takes years... but dang it! I want it now! ;) So we practiced. It's a LOT easier in the sitting trot but then Dan got sucked back. However, I did notice that when I was able to do it right, he did get more engaged and seemingly felt like he was reaching under more with the inside hind. So yay! And... once we got in the groove he didn't seem to stay in front of my leg. And hopefully I wasn't squeezing on every down stride. It was hard though. It's an ingrained habit. Ugh... But... practice makes perfect, so we'll keep knocking away at it. 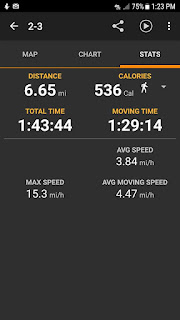 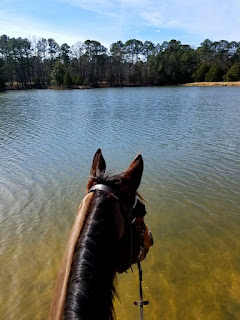 Then we picked up the canter and man... cantering for 2.5 minutes correctly is hard. For both of us. :) We were both huffing and puffing. So yep... I see some cardio in our future as soon as we are allowed. It was easier to do the half halts at the canter and Dan got pretty round and supple. And while I didn't work so much on the letting go, because I was focusing so hard on the other stuff, I don't think I was holding/preventing as much. So he got kind of nice. Going to the right is much harder though. I just can't seem to find my seat. Sigh... I need a seat lesson or something. I had to tell myself "SWOOP.... SWOOOOOP... SWOOOOP" every stride and it felt like I was really almost throwing my pelvis to his ears. But... it did get better. It felt a little runny/fast, but... it seemed to work as far as getting the canter feel back. So... we'll see. It's a work in progress.

Then I did a bit more trot and lateral work and focused on only asking for the leg yield with the inside leg at the right time. I really think it helped. Oh... and my confusion was.... if I'm trying to NOT kick every stride and dull Dan to my aids... then how am I supposed to be half halting/parading every stride?? And I realize that it's only "parading" on one side vs kicking with both legs. And I realize that a properly executed half half/parade vs me just flailing away is different. But I guess I'm afraid I'll end up doing exactly what I'm trying to avoid doing by trying to do the right thing. Ugh.. But I did feel a bit of a difference. Danny seemed more engaged and active instead of tuning me out. So maybe that's the reason it works.. because I'm activating a specific leg vs just whumping away whilly nilly. Hopefully I won't screw this up.

So then we went for another short hack to cool down. We ran into Caroline and Bandit so we took them to the lake and then by Raccoon Loop and then up the Great Northern. Danny was a goofball! You'd think he would be tired after all that fancy prancing. Nope. He was showing off. I let him get a drink at the lake and then he was pawing and splashing in the water. Sigh... He was bouncy and springing. All tiny little stuff that was more bouncing than actual rearing or bucking, but... he was flinging his head around like crazy. Such a goober. Luckily Bandit was like "whatever man...". :) 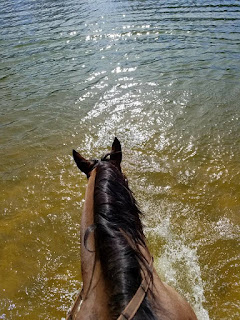 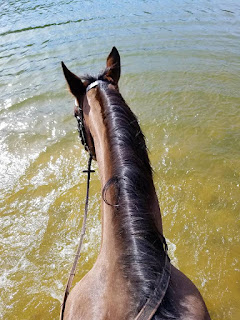