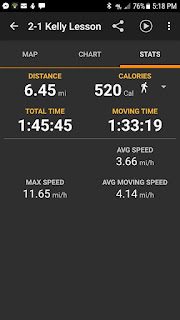 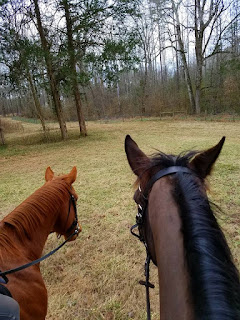 Ahhh... today was a nice day. I got to sleep in a little bit and went to acupuncture one dog. Then I was able to go to the bank and come home and work on a bit of stuff. I decided to let the horses out on grass for a bit since it was actually sunny for a bit. I messed around in the horse trailer too. And the boys were happily grazing. And then... Dan went bonkers! He went zooming off and rip roaring around. Sigh... He was allowed to be turned out today but it was supposed to be after a ride and while drugged. But... close enough. ;) But he has been in a mood lately!! He was flying around the farm, kicking up clods of dirt. And kicking up in the air and leaping. And then he slipped and his hind end hit the dirt. Sigh... seriously?! But he got back up and took off again. I finally managed to catch him and load him up so we could go for our lesson. 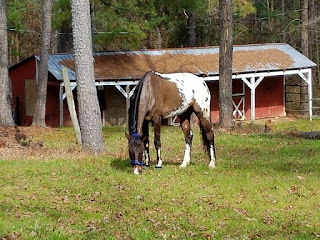 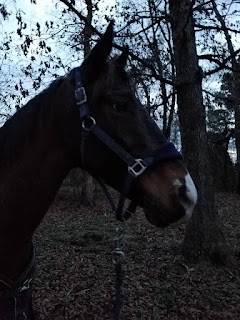 We got there early and Caroline and I went for a hack. It was awesome to catch up with her and it meant that Dan got a proper warm up. (And then some!) I think we rode for 45 minutes. But it was a nice hack and he mostly behaved. He was .... twitchy. ;) But nothing major. Then Kelly was ready for us. 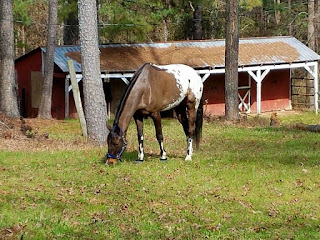 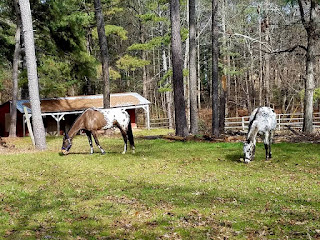 We talked about what I wanted to accomplish and how he was doing and Kelly said she wanted to watch me go and after half a minute she said "Is he this behind your leg usually?". Sigh... "Yes!". So... then she got that mischevious smile and said she had a fun plan. :) Uh oh!! But it was fun. She got the lunge whip out and basically encouraged him from the ground. She had me sit up straight and tall, with my butt underneath me, engage my shoulders and traps, and keep my elbows at my side. No knitting and no fussing. She said that she and Dan were having a discussion (argument... discussion.... same thing!) and I was to ignore that part. I needed to keep my legs soft and quiet and not nagging and let her do that part of the energy creating. It was awesome!!! He got sproingy and bouncy!! And then I could focus on me and other things.

I mentioned that he felt overbent one way and throwing his shoulder out the other way. So then I focused on riding the shoulders. And essentially it was the same thing as my Beth and Cindy lessons, but Kelly helped me realize another helpful point. When we're tracking to the left... and I feel like he's hanging on my outside (right) rein... it's cause I"M HANGING on it. And it's because I feel like he's throwing his right shoulder out so far and I feel the need to prevent it from going sideways. And Kelly said that he does do that, but.... I can't just block it and prevent it all the time. So... she had me pick two to four spots on the circle where I had to let go of that outside rein. But then I could pick it back up. In the beginning it started with me practically throwing it away and then picking it back up but within a few circles I was starting to get a little bit less dramatic and more smooth and flowy with it. And by the end of the lesson I felt like I could almost subtly soften it when I needed, not just at set points, and then smoothly pick it back up and RIDE him rather than just... follow a plan. It was great. And... once I realized how much I was blocking him... it was nice to see that he wasn't really throwing his shoulder out as much as I thought. And when I softened, he could soften and relax and his neck was actually pretty straight on his body and correct.
Tracking to the right, I need to create the bend but keep his head between his shoulders. And I don't have to actually ask for haunches in but by riding a correct bend, it creates the slight haunches in feeling I need. However, I had to make sure that I didn't over do it and let him fling laterally.

We got some pretty nice canter too and it was the same thing. Focus on riding the shoulders and forward and everything will fall into place. I did have to remember what Cindy had mentioned about keeping my hips swinging forward and not shutting him down without giving him a chance.

So yep... Great ride. It was so nice to be back with Kelly. She's so fun and positive. And Dan tried very hard. He started the lesson flinging his tongue but as soon as we started working in the trot, he didn't do it again. Phew.