First we don't have propane, so it's cold and I'm cranky. No hot water so I'm stinky and greasy haired. But it was okay.... I started out okay... I rode... I got my new radio installed in the truck and Mike and I had fun hanging out. Then when I went grocery shopping Mike called me and said that Cody had attacked Azrael and she wasn't looking good. :( Son of a ..... Stupid dog... Stupid cat coming up to the house... argh.... I rushed home and she was bad. We rushed her to the E-clinic but couldn't get a catheter in quick enough and she ended up passing away. Poor kitty... And now both Mike and I are so mad at Cody. I know that it wasn't anything more than genetics and nature... and he didn't mean it necessarily. I know that he snuggles with Cheese all the time and in the years we've had him.. he's been sweeter than sweet. But it doesn't matter. I see the scratches on his face and now all I'm picturing is the awful terrible agony poor Azrael went through. And poor Gargamel... all alone now. While we were at the e-clinic, they had a rescued little black short haired kitten that was semi-feral that was needing a home. So... we ended up taking him so that Gargamel wouldn't be alone.

So yeah... that... and with Danny being funky and me being worried about him... I'm not too impressed with 2018 so far. And then this morning I woke up with a migraine. I didn't want to get out of bed, go out into the cold house, into the garage, and then take a pill with ice cold water... so I didn't. Which meant when my alarm went off, I still had the migraine. And it was 12 degress. FREAKIN' 12 degrees!!! And by the time I rode, it would only be 24 degrees. So.. between being sad about Azrael, the migraine, and being worried about Danny.. I decided to cancel my lesson. I got up, took the pill, and went back to sleep for an hour and a half. When I woke up again, I still had the headache but it wasn't as bad. I took some ibuprofen on top of it, and went to go feed ponies. Luckily the kittens were in the feed room and their water didn't even freeze! I'm glad I moved them. Though they aren't friends yet. And Toothless (Jerry... whatever his name will be) was still terrified and hiding. But they were warm. And Gargamel doesn't seem too traumatized. Then when I got to High Point to adjust the two lesson horses... I finally started feeling better and then I was sad that I missed my lesson. I wanted to get Cindy's take on how Dan looked to her. And I forgot that it was warmer in the covered with all the bodies in there and the footing wouldn't be frozen and concussive. Sigh... 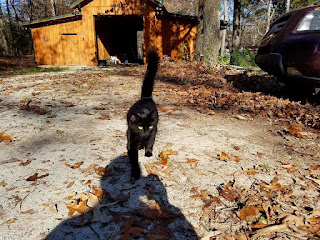