XC Schooling with Kelly... aka #isurvivedbubbas2017

Today I hauled Dan up to Bubba's (Sandy Hills Farm) for a XC lesson with Kelly Eaton. That part of Aiken is really pretty! Anyways, when we got there Mr. Sandy greeted us with donuts! YES!!!  :) We chatted a bit while I was grooming and then he went to leave with his four wheeler. Dan had been giving it the hairy eyeball (and... when I went to take him out of his stall after breakfast he acted like he NEEDED to go do his gallop laps...so I had a feeling it was going to be that kind of day) so when he started it up, Dan jerked back and broke the trailer tie and trotted around. Luckily he only trotted around the trailers and let us catch him quickly. Mr. Sandy has a gallop track and I was so tempted to take Dan out there to warm him up. Unfortunately I didn't get tacked up quick enough and didn't have time. 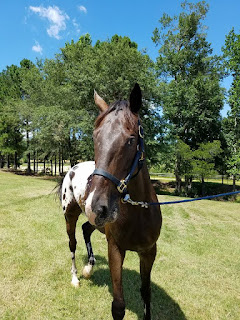 But it didn't matter because despite my premonition, he was GOOD!! Like... the best behaved actually! #thatneverhappens! I rode with Caroline, who was riding a 7 year old Hanoverian who hadn't been off the farm in a year or two and he was a little bit rowdy at the beginning. He's also huge... like 17.3, 18 hands huge. It was odd to not be on the biggest rowdiest horse. ;) The other horse was a Hanoverian who never grew past pony size but she was cavorting a bit. Dan just warmed up like a professional. :) I sort of miss the antics. :) And he maintained his cool the entire lesson..... He's growing up!!!! 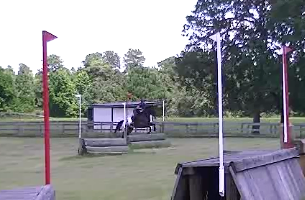 Anyways, Kelly asked what we wanted to work on and I told her that part of me wanted to put more money in the bank and let him look at the water.. but the competitor in me wanted to challenge it. In theory, there should be enough money in the bank now. So.. we decided to attack it and see what happened. Kelly had me do two logs and then a blonde coop (although I totally forgot about the coop) and then another log into the water. She told me to ride it very aggressively with my body position. In other words, sit up, sit back, shoulders wide, whip at the ready, and even give him a little tap after the log to get him paying attention. I was also going to pick a spot with my eye and ride to that spot!! The plan was forward to that spot. If he went left, I countered, if he went back, I countered... but we were going to that spot!!

So.. this is what happened.... Attacking the water
Of course he was great!! ;) Even after "drowning" yesterday during our swim. :) Good boy!! So... there's that. I'm not sure it'll translate to AEC's, but we've got the water at Windridge to practice on going in blind again and then we'll have the Clayton clinic at Stableview for another water practice before AECs, so.. Fingers crossed. :) But I do think I can use that "ride" to my advantage. Maybe he was going in anyways, but maybe... because I rode like that... he went in. :) 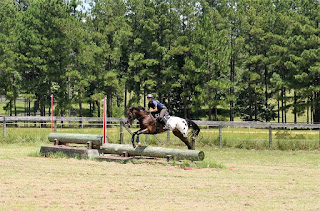 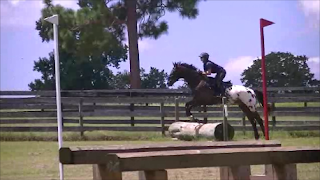 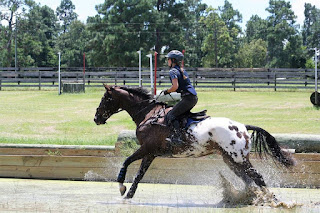 So then we worked on some ditches. Dan just hopped on over like it was no big deal. Yay! We jumped a few other jumps too, all little stuff. Then we went back to the water and did some more fun stuff with it. We walked down the bank and then up the bank. Kelly made me keep my butt in the saddle. It's been a forever issue with me. I've constantly struggled with it. And I tried holding my saddle or neck strap to keep my butt in place, but... I can't seem to make it work. So today I tried something different. I didn't hold on! I thought, maybe... if I stop trying to hold myself IN the saddle, I wouldn't push against my stirrups so much. And.. it worked!! Or maybe it's timing... maybe it's my saddle...maybe it's Danny dropping instead of launching... who knows? But I got it!! Not every single time, but... more often than not. :) :)
See!!! 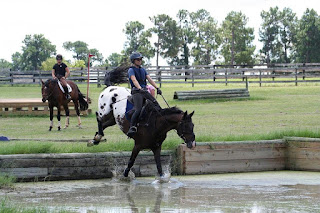 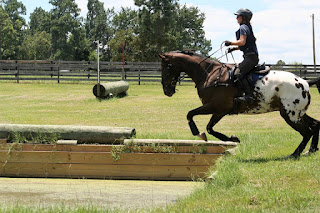 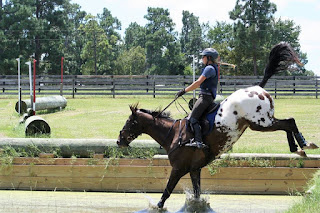 So then we upped the ante and trotted in and out and then we even cantered in and out. :) We did the sunken road.... Cantered down the bank into the water, through the water, and then out over the bank. :) And then Kelly added a small vertical one stride after the out and we did that! It was tight and he sort of peeked at it, but... he did it without hesitating. It was more of a peek like... "how do I do this?... oh, that's how!". :) Then Kelly raised it a bit bigger and we did it again! Wheeee!! 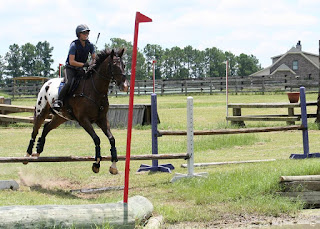 So then we moved on the bank complex and Dan went up and down again and I worked on my seat again. So then Kelly made me a mini course. I had mentioned that I was sort of interested in doing the ditch and wall. Because he had done the one at Ashland.. and I had Kelly there if we had any issues... But I also said that it might be bigger and more impressive than I was willing to do today. Kelly walked over and looked at it. The height was small but the ditch in front was fairly deep. I probably wouldn't have tried it on my own (well, maybe... you never know, but... ) but Kelly said it was doable, so.. she made me a course. And we did it! On the first attempt!! He peeked a little bit, but not bad. And again it was more of a "what is this?" peek than a "OMG DITCH OF DEATH" peek. :) hee hee...
The ditch and wall! 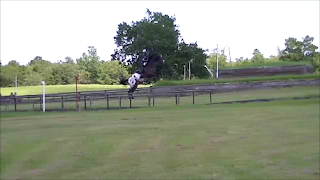 So then we did another course. She told me to do the open oxer lincoln log thing... EEEKSS!! I hate those things. They freak me out. And our course finished over the fairly big (training level?) mushroom cap thing. So.. I started out and the first attempt he was a little behind my leg. Or maybe not so much behind my leg as I had him a bit too compact and not forward enough. (Although I suppose he was too collected without the in front of my leg part). So he got over all of it but it was a bit ... oofy!. So Kelly told me to let him open up just a bit and it was MUCH better. He jumped the big coop thing too. :)
Mini course 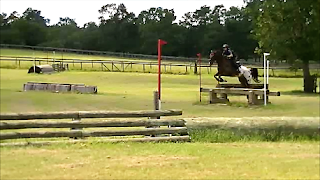 So yep... tons of fun!! And very helpful! I learned how to keep my butt in the saddle on drops... hint.. don't hold myself down with my hands.. just keep them up and focus on my seat. Now I've got to figure out my darn hands... sigh...  I also need to focus on my landing gear, although that was better today. She didn't have to say anything about it but I did find myself pinching with my knee some. 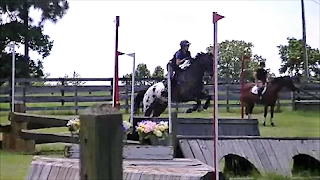 We also figured out a good thing for me to think of... Dan tends to lengthen to the fence and at the last stride or two, he drops his shoulders while he's lengthening and "peeks". It's not a real peek but for lack of a better word, he peeks. In order to avoid this, I need to keep him from lengthening to the fence but also keep myself up and my shoulders up and keep my hands up to keep him up. I am worried that I'm holding his head and neck and preventing him from using himself jumping well, but Kelly reminded me that it's a good solid connection, and I'm not catching him in the mouth. And it's helping keeping him from ducking his head down and dropping his shoulders. So if I can figure out how to accomplish this without holding him and preventing the bascule OR looking like a moron, we'll be on our way to looking better in our photos. :) 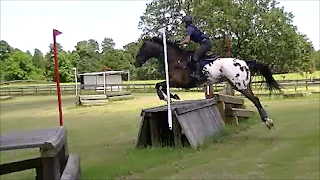 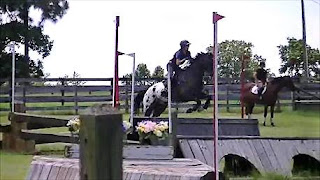 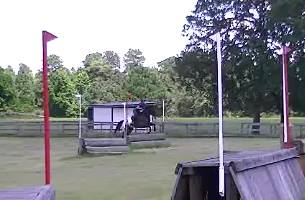 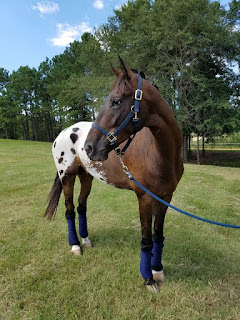 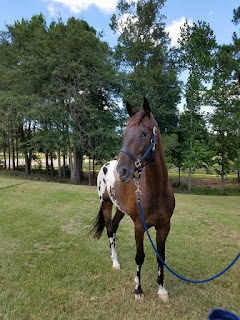 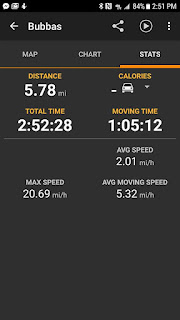 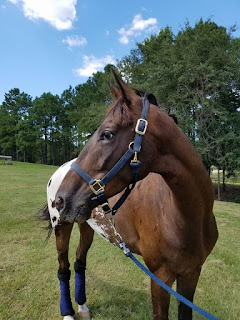