Okay... this was a great lesson but it was REALLY Hard!! Like way harder than it looked. Even Jamie, who rode after me, struggled. But it was super helpful and super effective. Sadly Dan learned more than I did. Or did better than I did. He's a saint!

But... we did end up with this!!! I had to put the robot over me because I look terrible. But look how awesome Dan looks?!?! 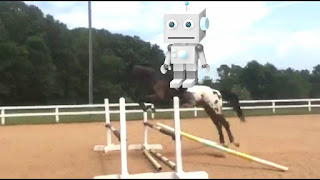 So... the "grid" was a diagonal pole on the ground, which was later raised to cavaletti height, with four poles in a square around it. So... We started off by trotting through the two poles in a straight line, crossing over the diagonal pole. It made two bounces... so pole, bounce, diagonal pole, bounce, pole. We did a cloverleaf pattern, so we basically came at it from all four directions. We started out tracking left and Dan did pretty good. Then we did it tracking right and we kept landing on the left lead. Beth said that it looked like I was leaning some and asking for the left lead so when I focused on putting weight in my right stirrup and closing my right leg... he landed on the right lead. So...there's that. But... anyways, the grid sounds easy, but it was hard. Dan had to be on the bit and pretty rocked back and collected. BUT he also had to be snappy and in front of my leg, not lethargic and small in order to be collected. Almost a canter pirouette canter. So.. that was doable. It was tough at first but then I got him a little more in front of my leg and it was getting fairly doable. 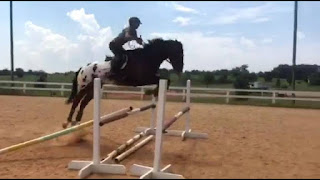 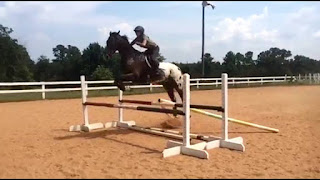 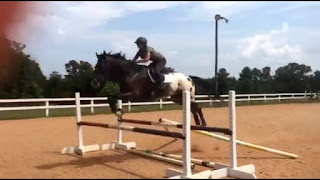 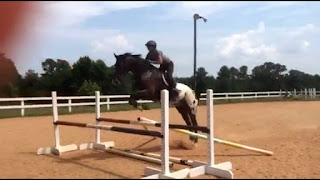 So then it got even more interesting. From the cloverlead, we then cantered to the oxer with the V poles. Beth wanted it in 6 strides, which meant I had to keep him fairly collected, but not quite as collected as I did through the cloverleaf. Okay.. easy enough. But NOPE! Not easy. It was really hard. I can get that pirouette canter on the flat and over teeny fences, but then I lose my nerve over the big fences and either shut down or gun him or let him get big. The first time over the oxer (maybe it was a vertical at that point) he stayed fairly small and didn't have to heave over it, but it wasn't a powerful push off. And it felt like if it had been bigger, it would have been a struggle. So then I tried to increase the power and allow the stride to get a smidge bigger, but not too big and that's when it all went to pieces. I just couldn't find the fine line. But that's why we worked on it. We got some really nice fences.. but we had some big super man reaching ones that were 5 long strides instead of 6. Then we had a really nice 5 stride that was lovely... and actually on purpose. But then going back to th 6 got tough again. 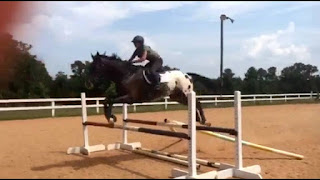 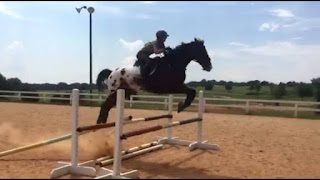 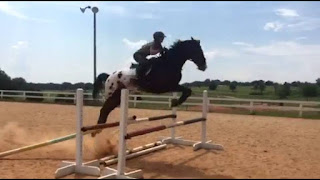 The other goal of this exercise was to improve Dan's form and get him rocking back and jumping. And it really seemed to work. He looks great. I, however, look like crap! I don't know if I just couldn't stay with this jump that is more powerful or if I was getting left behind or jumping ahead or what. It was tough! And a little disheartening, but... exactly what we needed. And.. my leg isn't too bad, but my hands are out of control again. I feel like Dan is jumping into my hand and I'm restricting him when he jumps better and from the deeper spot. When he takes the flyers, I feel like I release him more and better. So I have to figure out how to get him to the base, keep the connection and not abandon him, but release just a smidge more...
Grid work