Ahhhh, I needed today. Yesterday was a long day and I'm feeling a bit overwhelmed. I was pretty tired but I got up early(ish) so that I could ride before the pony club demo I was doing. I didn't get up quite early enough to ride Fleck too, which I'm sad about but, I just couldn't do it.

The weather is actually quite lovely comparatively, so it was a great day. We started out in the arena and did some dressage. It started a bit stiff and icky but I managed to save it somehow and we got some really lovely work. Actually, it started quite nice but then got a little wonky and then I saved it. Or perhaps I ruined it and then Dan saved it. ;) 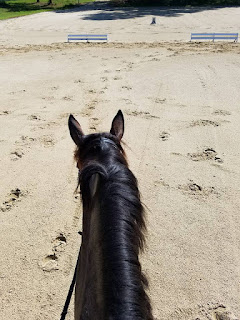 We started at the walk doing haunches in and shoulder in since the arena was freshly groomed. I was looking at my tracks and it was actually really quite nice. We had 3 tracks and in some places almost a legit 4 tracks!! (I know, it's supposed to be 3, but... 4 is better than 2). Then we worked on the trot and getting him to soften and let go with his neck and get the correct muscling. We also did some transitions and they got smoother. Yay! Then we went to the canter and did some counter canter. He actually held it for the most part! I think we only dropped it once and that was the third time.  However, we started blowing the leads from the trot. Sigh... I ran through my test and he picked up the wrong lead at first. ACK!! That is NOT AEC ACCEPTABLE!!! I went back and focused on me and I think that in an effort to get my outside leg back, I'm actually asking with my outside leg. Ugh. So when I started asking with my inside leg and not worrying about my outside leg, it resolved itself. Seriously.... how can I have been riding for THIS long and still not know how to coordinate my aids for the canter??? Sigh... 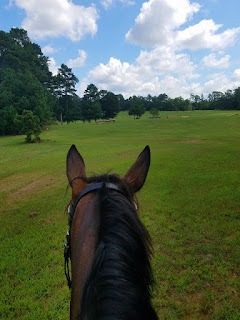 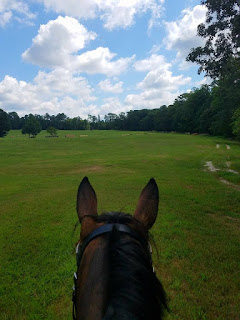 So then we ran through the test once and then I did a little bit of canter work and then a stretchy trot and then we were done. Poor Dan was dripping and pretty warm but still happy to keep going. I pulled off his saddle and my boots and put on the bareback pad and we headed to the lake. :) On our way we stopped and talked to some friends and he grazed. And then we got to the XC field and some friends were out there jumping. So..... I ended up hopping over a few fences. The first one was a flyer. That's a little scary when you're bareback. But the good news is that it motivated me to keep him to the base. :) So we did a few of those. Then I went to jump the roll top into the water and... he cantered very happily into the water and then slammed on the brakes and then drank and drank and drank. Hee hee. Jessica was like "You better hope that he doesn't do that on XC". Umm..... yeah, so...  doh. :) But he was really thirsty so... I let him drink and then we properly jumped through the water. We did the drop a few times into the water. We even did the small vertical into the water. Wheeee.

So then we all headed to the lake. Dan and I had so much fun that everyone ended up pulling off their saddles for a swim party. :) We had so much fun. After we splashed around a good bit, Dan went for a swim. :) And then I had to leave because I had to get back in time for the pony club demo I did. (which was fun.. they are hilarious and good kids). 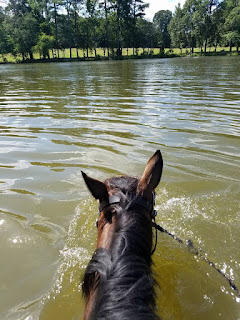 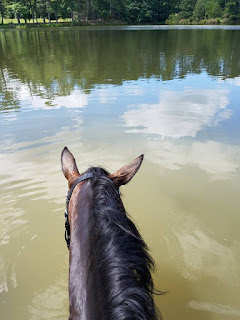 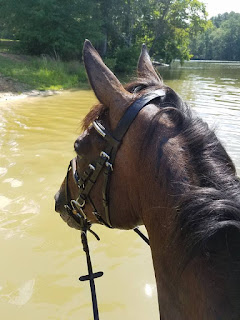 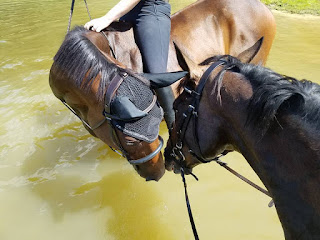 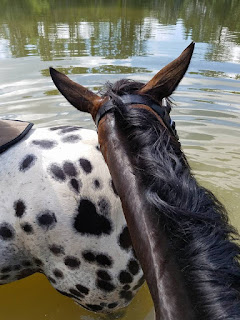 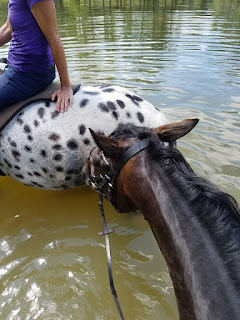 Indi makes a good scratching post when your head is hot and sweaty and itchy. :)