I had a terrible migraine last night, compounded by a possible mild heat stroke/dehydration. It's so freakin' hot!! And I've been going non-stop, working or showing 12 plus hour days in this ridiculous heat and humidity for at least 12 days in a row now. Yesterday it was 96 degrees.  Not "feels like" 96.. ACTUALLY 96!!! I don't even want to know what the humidity made it feel like. I didn't even work all that hard.. only 6 horses. But... it did me in. I ended up taking 2 ibuprofen and 2 migraine pills, which then added to my feeling of foggyness and lethargy. So when I came home I was exhausted. I found this.... Oh Dan. I was too tired to even deal with it. 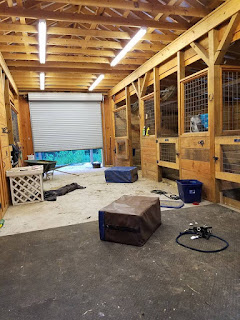 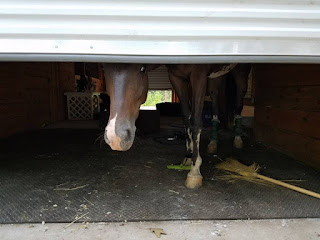 Then I could hardly stand up for my shower and dinner. I decided it was probably worth sleeping in, even though I knew it'd be too hot to ride later. But... there's only so much I can do. So I slept in.

And I heard Oblina puking at some point in the morning, but she had done that the morning before. So I didn't get up to investigate. However, once I got up and got my morning rolling, I found her laying in the litter box, half dead. She's 18 years old... and I knew it was coming. I just didn't expect it to be so dramatic. Unfortunately she was so shocky that I couldn't hit a vein and spent 30 minutes trying. She basically passed away on her own, with no help from me. I finished the job, but... probably didn't need to. I feel terrible... she spent her last morning, miserable.. in a litter box. I'm the worst mom. Then I couldn't even help her on her way. 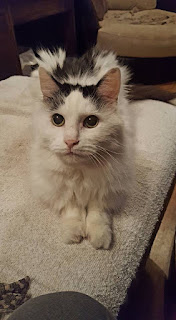 After that I had to get to the dump before they closed and the horses had gone back to the front field to eat because I was so late getting them breakfast. They didn't come up quick enough so I left for the dump without feeding them. Then spent the whole time worrying that they were dead or stuck in wire or snuck out and were getting hit by a car..... They were fine. I got home and they were *starving!!!*. Unfortunately in my haste, I forgot my bank deposit and ran out of time to come home and get to the bank. And I forgot the gas tank for the tractor. And I forgot to get feed and salt blocks and fertilizer. Sigh.. So I came home and decided to work on reports for a bit since it was toasty out at this point. I did that for a bit, then went and buried Oblina next to Roany. Of course it was so hot and humid and I had a late lunch and was crying, so I gave myself another migraine. Sigh... So I took another migraine pill and came inside to cool off. While doing that I checked the weather and.... my plan was to ride around 7 pm... which is right when the storms were going to hit. Sigh... Argh! I still needed to rehitch and get the boys. And I wasn't done with reports. So I gave up on reports after a few more and checked the weather again. And it was about to hit right then and there, but clear up a bit after. So I debated.... it was thundering and windy out, but pretty pleasant and only partially cloudy. I finally decided to just ride at home. That way if the storms got bad, I was close. And if it started raining and kept raining, at least I'd get a ride in. Plus I was tired and grumpy and had so much to do... it just seemed smarter. So that's what I did.

I tacked Dan up and we went in the front field. I left Fleck in his stall. Danny was a bit rowdy but not as bad as last time. Thank goodness! He started out a bit frisky but I put him to work after a bit and he settled down. It was actually quite nice because he was quite forward and powerful. We did some good work at the trot and then did some work on the walk to canters. We struggled with the left lead but at the end we got it. He was actually leaping into it. I think he's as frustrated as me, if not more. Sigh.. I'm sure I'm throwing him off somehow and he knows it. We were working on walk to canter to 15 (or maybe 12 or 10.. I suck and was in the pasture) meter circles, then cut across the short side, walk and then pick up the other lead. We were ALMOST done... and the new neighbors dog came flying out at us. I'm honestly not so sure that Dan spooked at the dog.. I think it was the people coming out after the dog. But our back was to them so who knows. He bucked and bolted and almost dumped me. But I managed to stick it and then we turned around and once he saw what it was he was fine. Of course it took them about 10 minutes to catch their dog. It was cute, but clearly had never seen a horse before. So Dan and I had to sit and wait. I was almost done... Ugh. So once they got the dog, we picked back up and after 3 attempts got a nice left lead from the walk and a nice right lead from the walk. Then we did a little bit of trotting and actually had what felt like a decent shoulder in to straight to haunches in on both directions. :) Yay! We quit with that. 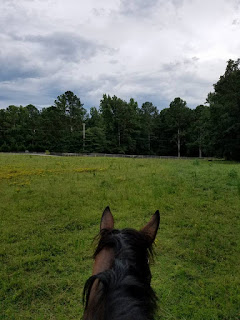 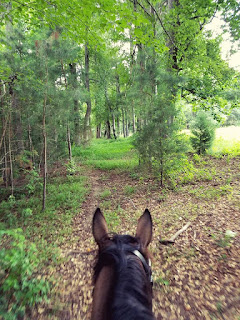 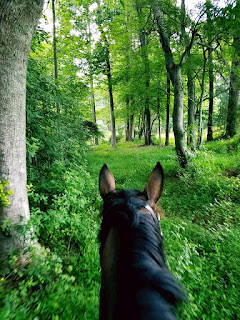 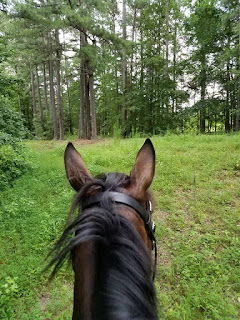 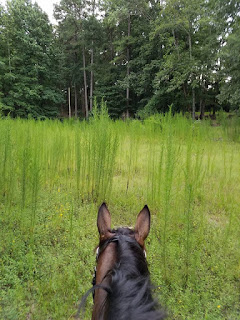 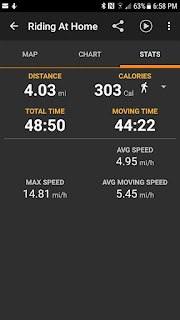 And in the course of our ride... it barely sprinkled for about 3 minutes. And then the clouds cleared and there was no storm. Sigh.... Turns out it poured at Ashland though so that made me feel a lot better. I was able to go to dinner with Mike and we ran to Tractor Supply, although we didn't get what we needed. And then on the way home... the sunset!!! It was so gorgeous. I kind of wished I had ridden at Ashland. Oh well. At least we got a ride in and it was a decent ride.
Posted by Holly at 7:40 PM