Back to fancy prancing with Kelly! We had a good lesson. It was nice too since Cindy was out of town and we didn't do any dressage lessoning. Plus we've got to up our game for the AEC's. We need to get back down to the low 20's again. 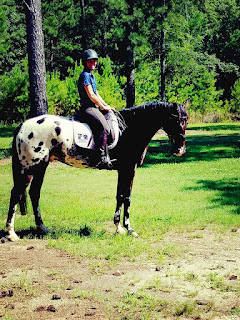 It was a good lesson. We continued on with our collection work. We started out with the trot work and did some serpentines. Kelly reminded me that he tended to get behind my leg when we changed directions. What felt like him losing the connection was him slowing down and going behind the aids. So... when that happens, instead of trying to correct it with my hands, I need to correct it with leg. I need to push him forward back into the bridle. Then we moved onto doing the collection and then letting him out again. Then we went to the canter. We did our walk to canter and Kelly reminded me that the first three can be messy, but the goal is snappy! I swear Dan knows the drill.. he is a bum for the first two but then snaps into the third. Maybe I need to up the ante. ;) Our left lead one is still tougher, though he was pretty good today. Once we got the canter, then we did the collected canter. Then from there.. we started baby pirouettes!! Eeeeekss!! We were only doing 1/4 turns so basically only 3 steps. And they weren't real pirouettes, but they were the start. :) It was fun.

So we started off with the collected canter and got a bit of a shoulder in. Then it was bring my hands both to the inside, up against his neck (NOT crossing over) on the outside, outside leg to guide him over, and inside leg to maintain bend, and... release. Each stride required an aid and then the release. I couldn't get the hang of it at first and we ended up careening through the middle of the arena. Once Kelly reminded me that I should be doing a quarter turn and ending up heading towards the other side of the arena, I rode my geometry better. :) Doh. We started to get the hang of it though. :) We got one decent one to the right and then we quit. It was just so hot and humid and it was a lot of hard work for Dan. I told Kelly that I was so excited though because he really was trying! He wasn't saying No, he wasn't coming up with evasions. He was legitimately trying! It was hard work and he couldn't hold it and he was wonky when I threw him off, but he was really trying. We decided that he was growing up and seemed to like the challenge. :) I knew that. :) I think he's bored and this is a fun game for him. I just slow him down and frustrate him sometimes. :) 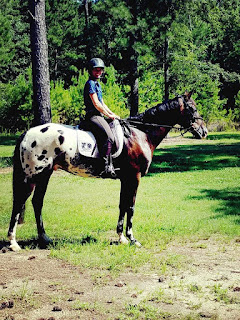 So... after our lesson I wanted to give Dan a little reward for working so hard. It was hot and he needed to cool off anyways. We took a nice walk to the lake and I let him splash a bit. He decided to go in for a little dip but didn't go completely under. So my legs got wet and the bottom of my saddle, but at least the saddle wasn't completely submerged. :) Then we headed back. I think Dan was tired. After his hosing he basically climbed into the trailer while he was still tied to it. Hehe... Poor guy! 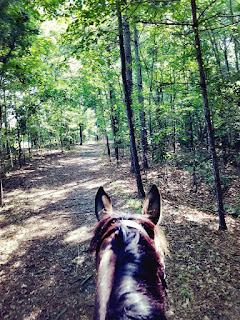 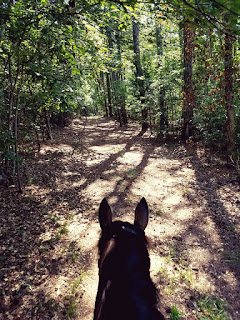 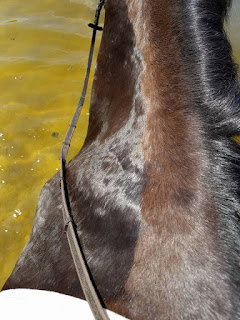 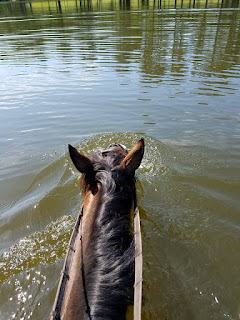 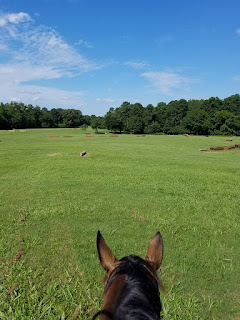 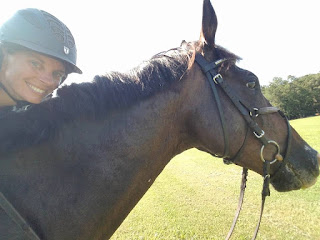