The horse showing score is currently 0 for 2. Sigh. I ended up signing up for the Chatt Hills schooling show... in an efforts to get out there after having to scratch from Fence. I even paid extra since I signed up late. And then... on Friday it rained.. and rained.. and rained some more. Ashland literally got 6.6+ inches of rain! And the arena at Starlight was completely underwater. The entire thing... like I wished that I had already desensitized Dan to the unicorn raft because it was the perfect day to go unicorn tubing behind Dan. And this is what the XC field at Chatt Hills looked like on Friday... 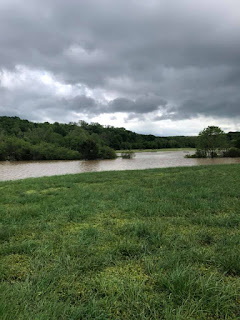 Apparently on Saturday it was even worse. So they had to cancel the XC portion and just made it a CT. Which sucks for them...sucks for us. Sucks for all. So... with it being rainy still - it sort of drizzled all day - and it being cold...(it was like... 50 as the high with a windchill of 43!)... I just decided I didn't have the life energy into going and showing. Especially because I really needed to put money in our bank, rather than take it out, and.... perhaps showing in the cold and rain in possibly sloppy footing in stadium.. just seemed like that wasn't going to be helpful. So I didn't. And I'm okay with the decision. I think it would have been fine had I gone also, but... this way I was able to go get the boat with Mike and put it in the water. And then I came home and decided to take Flecky for a birthday hack and then Dan and I played some. It drizzled on and off all day, but it stopped around 4 pm, so we were able to ride and not get wet. It was just chilly.

Dan and I did a short little hack around the small lake at Ashland. Apparently yesterday the path between the turtle pond and the heron pond was completely underwater, but today it was just sloppy. Then we did some dressage. And he was FANTASTIC!!! Okay, so it took a bit. We started off and he was just a bit sluggish and we were hanging on the left rein. So then I asked for a trot again with the lightest of touches and barely got a trot. So we did some shock and awe. And... he didn't react. A few times. So then we did some more "shock and awe" and he reacted and then almost over-reacted, but... then.. he was on fire! It was awesome. He was responsive and lofty and we got some beautiful work. And he was in the bridle but not braced or hanging. We did some trot work, some leg yielding, some shoulder in and outs, and some lengthens. We got some seriously good lengthens/mediums today! He was struttin'! Then we did some canter work and got all of our leads! (Maybe we missed one... or maybe it wasn't so much me asking as he just gave it... I can't remember, but it was only one if it was one). We worked on the canter collection, the jump, and the roundness. And then we nailed our counter canters, working on the feeling of half passing in the canter to the right. It was great. We got some good canter to walks too. And after our great canter work, our trot was FANTASTIC!!! I mean... bouncy and bouyant and floaty. :) It was lovely.

So then we did a short little cool off walk. 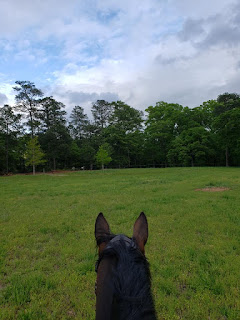 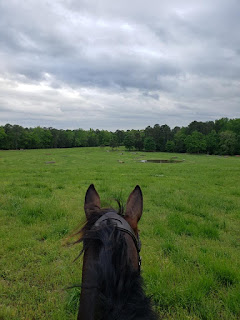 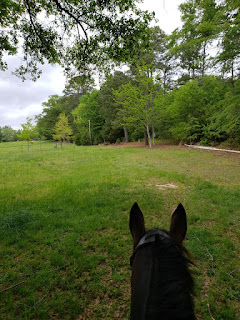 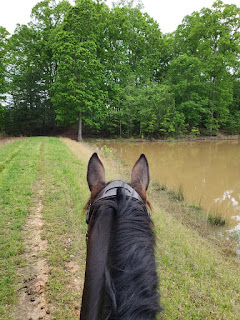 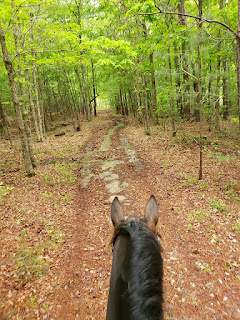 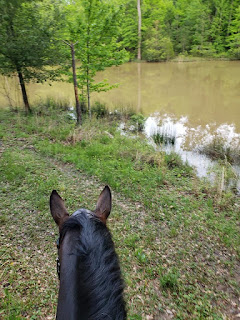