Riding in the Rain

First Ride of the Year!

I should have ridden yesterday (Jan 1st). But... it was cold and supposed to rain all day long. Of course it didn't actually rain. Just misted. But I was feeling non-motivated and lazy and then I was irritated that I didn't ride or accomplish anything. Ugh.

The weather today was not much better and on the weather apps, looked even worse. But the farm I was scheduled to work at cancelled. And because I had to be in Madison at 9 am to laser Dixie, I was up and motivated. I ended up working on Arwyn too. And... at that point the weather was just foggy and a lot warmer than yesterday. So I got home and looked at the weather again. And it was supposedly going to be a big rain from 2 to 3ish, then a window of no rain, and then more rain and stormy weather at 5:45. Kelli and I debated waiting and going at 3 ish. But finally I decided to just go immediately! It wasn't currently raining and I was afraid that the longer we waited, the more likely we would be to not go. And I'm so glad that we went!!! Of course it started raining a little bit as soon as I started down the driveway to Ashland. And it stayed at a light to medium drizzle most of the day. But it was okay. I was dressed appropriately and I was just so glad to be on my horse. :) 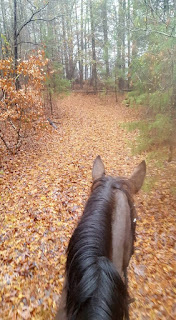 We had a great hack at the walk, as it was too slick for more. Although, Danny was a little annoyed about that! There was a girl taking a XC lesson despite the weather and when we started off the ride, Danny was obsessing and desperate to get to meet that horse. So we headed up to the jump arena first. I did a few minutes of walking and then started trotting some to help him get his mind off the other horse. He did great and I decided to canter because I wanted to. :) We had a lovely canter both ways. So then we went for a hack.

She was still in the field having a lesson and we went across the field so we didn't have to cross the bridges. Danny was sooooo mad he couldn't play too. He leapt up in the air a few times and did his "squeal/groan" under his breath thing he does when he's so mad that he can't go play. hee hee. Once we got into the woods he settled back down and was pretty good on the trails. We even did a few downhills without the bucks. 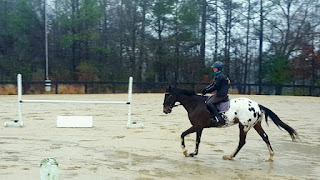 After the trail we went back up to the arena so I could watch Arwyn go and check her out for soundness. I figured I'd do a bit more again too and we worked on our trot and canter again. It was so tempting to keep riding but... I wanted to get back to spend some time with Mike.