I was sort of suspicious I was going to be sick. I wasn't feeling great Wednesday evening and Thursday was okay, but I was starting to get a little chesty feeling. Then Friday was okay but by the end of the day I felt pretty cruddy. Ugh. I felt like I was getting the flu. I ended up sleeping a good bit and felt pretty cruddy in the morning, but by noonish I felt like I could go for a ride. :) So I did! I met Liz at Harbins and we went for what was supposed to be a fairly leisurely ride. Ha!

Danny was a little hot and we had to have a moment of Zero Tolerance again. He started another spin but only got one or two in before he stopped himself. After that he was pretty good. We ended up walking and trotting some and the boys were both good. We even passed two beautiful mules!! Liz let us have a few little canters up some hills so that helped too. Towards the end we cantered and it got a little chaotic! Danny got all riled up with Forrest behind him maybe, or maybe he was just ready to go, but he kept putting little bursts of speed and bolting. I tried to rein him in but he was on the muscle! It was fun, but a little crazy, running through the woods. My half halts kept creating pogo-y effects. Good grief Dan! He settled pretty quickly though and then we had another polite canter later.:)

I was glad because I didn't feel as bad as I thought I might. And I got to ride. And ride with Liz! 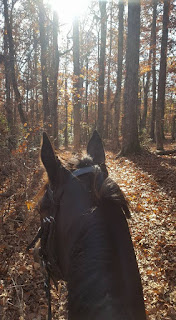