Jumping Branch!: So very good and so very bad!


Holy Moly!! Danimal was a hooligan today!! And also amazing and wonderful!!! 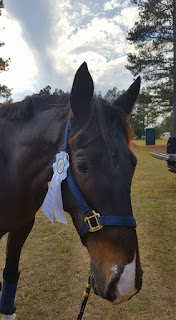 He was much improved in his stall compared to Chatt. I think it makes a difference when he can hang his head out. He slept well but must have kicked or knocked himself in the cannon bone on his right hind as this morning he had a lump and some heat. But he didn't mind me mushing on it. I tried to trot him out for Karen and Caroline and he was ....fresh! But looked sound. As sound as he could look doing his kangaroo impression. ;)

On the way to dressage warm up I think he went up in the air about 3 times. We had to go through the gallop track and of course, as we're next to the dressage arena's he starts acting up. I  managed to keep a lid on him until we got to the opening to go into warm up. Two kids had been sitting at the gate and stood up right as we were going to go through the gate. I don't think it was them, he was just looking for an excuse, but of course he went up and spun, and almost spun into the ropes. Sigh.. And almost ran Lellie over. So then we managed to get into the warm up area and he was naughty! Just antics... bouncing.. BOINGS! I tried to work through it but he was so on the muscle, so we ended up doing mostly canter laps. But after about 15 minutes he settled enough that I felt it was safe enough to go in and let the volunteers know that I was checking in. So then we had a long wait before our ride so I let him chill on the buckle. I swear, he goes from 150% to 2%. Sigh... I did manage to walk him over the ditch in warm up a few times and even trotted it. He spooked at it the first time but then trotted happily through it. He was spooking at the people walking cross country too. It was tough because I wanted to make him work but then I didn't want to ruin anyone else's ride. And then I never really got him relaxed. He kept doing that hopping thing when I put my right leg on him and therefore he was never really in the left rein. But eventually I just gave up and figured it was what it was. I was tired too. The first 20 minutes were exhausting. 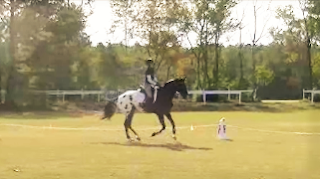 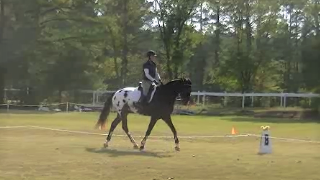 So we went in for our test and it started okay. Not great. I didn't have enough contact and wasn't riding well. But it wasn't horrid. We came around the corner and they had started stadium and a horse crashed into a fence and Dan bolted! Luckily he came back quickly and went right back to work. But then when we hit the next corner and went to canter, he slipped and coughed at the same time, so he swapped behind. And then because he was coughing and pulling his head down, I couldn't get him pulled up to change til half way through the circle. But after that we recovered and the rest of the test was okay. Nothing fancy. And nothing compared to what we can do. But pleasant enough. And then we came down centerline and I think I thought we were too far to the right so I sort of threw him left apparently... and he halted and then crossed his front legs. ??? He's such a weirdo! So yeah... the judge was nice and told me that he was going to have very extravagant gaits when he was on! We scored a 34 something, which isn't a bad score. But the judge was very generous and we were 7th out of 8. Oh well. :) 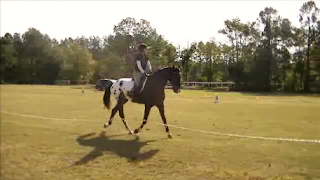 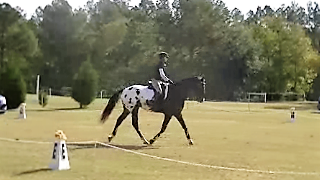 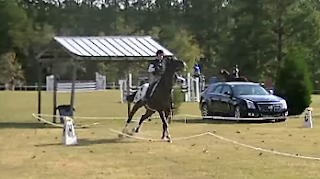 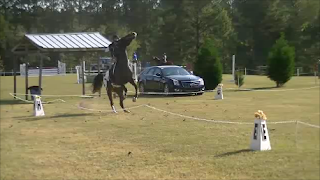 Then it was time for stadium. I was a little nervous, because the last time we were here he was rowdy and we had an incident at the barrels. So as I'm walking him up to the arena's, as we hit the wooded section, there was a noise in the woods, so he rears/hops/bolts sideways, almost losing me. He's such a dufus though because it was 5 seconds of stupid and then he's back to normal. ;) Except then once we got in warm up he got all riled up again. He wasn't as bad, just on the muscle. But when the horse in the XC field went past, he scooted and bolted. And then when another horse did something near him, he scooted and bolted. Sigh. He jumped well. And after 3 or 4 fences I went to the barrels. It was insane!! I don't know exactly what happened but he jumped it out of stride, but maybe from a little far back... I swear we were in the air for 5 solid seconds!! I am pretty sure he jumped the standards and I was way up in the air going..."Hmmm... this may not end well for me". He put his head and neck down too as he jumped so big so I had to slip the reins. Luckily, he landed and put his head back up and we smoothly cantered on. Otherwise I would have had nothing because I slipped the reins. Phew! After another little scoot or two I gave up and just went to stand and wait our turn. I was giggling because I heard a girl explaining to her friends "schooling shows are great places to bring your horse that needs exposure... they need to get used to being around so many other horses with all the commotion". Hee hee. Oh hey...are you talking about me?! ;)

But then when we went in, he was lovely! I probably could have let him get a little more forward or jumped a little more out of stride. But given his antics I think I kept him a little tighter. But he listened! It was a nice round. We had a few where he rolled his shoulder but most were lovely. And Karen said he got at least 2 changes. :) We hit one vertical hard but it bounced in the cups so we went double clean. Wheee!! 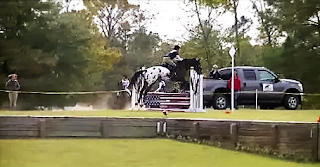 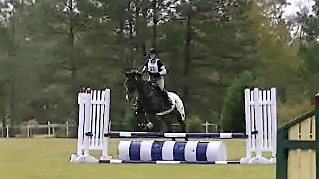 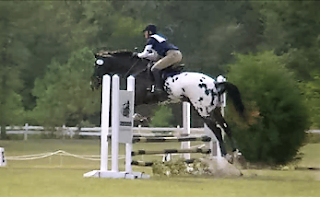 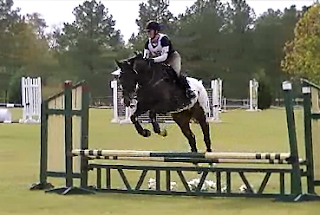 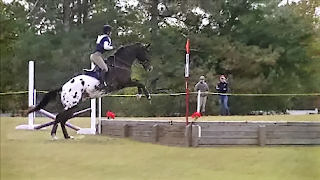 Then on to XC. As we walked up they sent a horse out and then told me I had 2 minutes. Eeeks.. okay. I jumped the roll top and then chilled for the other 1.5 minutes. He was AWESOME!!! He was quiet coming out of the start box and we moved up to a nice lovely canter and just rolled along. He never got quick or bolted. He didn't spook. He was a proper XC horse! He was looking for fences and locking on!! We had a lovely ride all the way through to the woods. I almost asked for a bit more of a gallop through the woods, for fun. But I was good and behaved. We came out of the woods and I almost went over the novice ditch first but didn't. I decided to canter it and it was a good choice. He came up to it and propped hard but never stopped forward momentum and jumped it. We landed in a trot and trotted the log after but he landed in the canter and we carried on. I decided to go through the water perpendicular to the flags first again. And he cantered through without breaking to the trot or propping but he did squirt a little to the side in an effort to avoid it. But he got his feet wet. So then I looped around to the flagged water and he locked on and took me to and through! YAY!!! We even jumped the novice log out. :) Beautifully too, by the way. :) We trotted down the hill in the pasture but picked up the canter towards the bottom and finished the course with no issues. He did sort of trip over the final log but it was tiny. :) We ended up finishing in 5:11 and speed faults were 4:58 and optimum was 5:40. So not too shabby. SOOOOO Proud of him!


We ended up finishing on our dressage score and moved up to 4th place. Yahoo!! I know we can do better in dressage, so... I"m thrilled that we improved upon the XC. :)

YAY baby horse!!! That makes up for all the shenanigans in warm up. :) 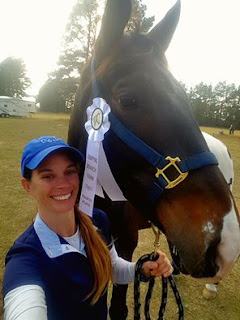