Mr Grumpypants gets his saddle tweaked

Argh... This week has not been conducive to being prepared for our show this weekend. I managed to ride Monday and Tuesday in my lesson. And then I couldn't. Today I had the day off because I was planning on leaving for Jumping Branch way earlier than I did, but... it all worked out beautifully in the end. :) 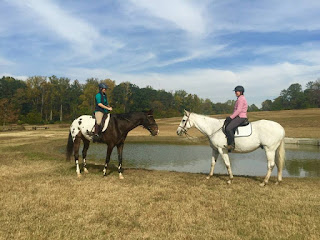 I got up and packed and then met Cindy at Ashland to get my saddle fit checked. Danny has been a grumpypants to tack up recently. He usually will pin his ears for a second but nothing more than that, but recently he has been really pinning his ears, snaking his head around, and even not wanting to take the bit anymore. I talked with Cindy Thaxton and we both agreed that he feels fantastic under saddle (well, she thought he looked good) and that he seems happy enough once he's tacked up. We thought that he probably was just a little irritated with the increased work load - ie, no more fun and games. And after I adjusted him, he was way better. But I wanted to check anyways, because you never know.

So.. my plan was to get there early and do a dressage school so that 1 - I could get my ride in, 2 - he would be easier to judge on how my tack was fitting. Unfortunately I couldn't get my life to cooperate so I ended up getting on right as Cindy got there. So I was only able to do about 10-15 minutes of flat work. She thought the dressage saddle looked beautiful, and I agreed that I didn't think it was the culprit. So then she went to put the jump saddle on him and he got so snarky with her! Like he had been with me. I'm not sure if he knows the difference as to the saddles BEFORE it even goes on..... or if he's just a snark with people other than me??? Regardless, she thought it needed tweaking so she fixed it. And yay!!! She was right. I didn't realize it had gotten that off, but once I sat back in it, it was obvious. I had been having a little bit more troubles keeping my leg in front of me recently and was having to hold a bit of mane when I was doing two point. I thought it was just weakness, but... once she adjusted the saddle, it was much easier again. Yay!!

To make sure it was fitting well, I hopped over a few fences. Dan was good. We did a goofy bounce to one stride to bounce grid, which was... awkward. But he figured it out. And then we did a few fences.

Then we headed back in and Peri arrived with the horse she was trying. So I threw the dressage saddle back on to run through our test while she was tacking up. I managed to get through it once (although he broke from the canter again, so I did that part twice) before she was heading out to XC. I followed her out there to be support.

And I'm so glad I did. She was having FUN!! I'm so excited for her. Dan and I watched them go and Dan snacked and we just basically walked out to XC and back. But oh well. It was worth sacrificing a real ride for a reflocked saddle and to see Peri having fun. She bought the horse so yay!

So then we headed home and I bathed Dan. I LOVE having hot water in the barn. Then we headed out to Dacula to go get Bruno, as he needed a ride, and then we headed to JBF. I didn't get there til 5 pm and figured that it was better to not ride Dan, so... that was our show prep. ;)

BUT.. the other great thing about today.... Danny got a candy cane from Santa Claus!!! We were getting gas and a guy with a big white beard was talking to him. I heard his wife say not to harass the horse. So I poked my head around and said "He probably deserves it!". Hee hee. We started chatting and I opened the door to let him say hi. He asked if horses liked candy canes and I said yes! He went to go get one and I was about to ask his wife "Is that Santa?" when she said "Your horse is gonna get a candy cane from Santa". hee hee. Awesome!!! Then Santa told him "make sure you stay on the Nice List". hee hee... Yeah, so Santa... about that.... ;)