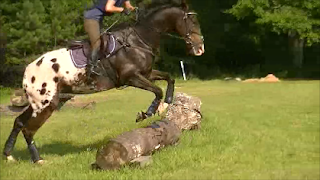 Such a fun day! I'm so glad I decided to do the lesson. I was thinking that Dan didn't need to jump for a bit and almost didn't join in, but I LOVE Kelly E lessons and wasn't quite ready to be jumping with Fleck, so... when Julie asked me to join her and Romeo, I couldn't say no. :)
And I'm glad I didn't, because not only was it fun, but it was super helpful! I rode Fleck first so I was a little rushed and didn't get to warm him up in the arena like I wanted. I was a little afraid that he was going to dump me in the XC field in front of Kelly, Julie, and Lynda, but... oh well. We got out there and started to warm up. He was his typical bouncy self for the first 10 minutes. He was distracted and playing so we had quite a few porpoise bucks and some scurrying. But nothing too major. Kelly said that I needed to be a bit more in the backseat and wanted me to kick my legs out in front just a hair. Then she said to collect him a bit more going down the hill and encourage a forward stride up the hill. She said we needed to start working on half halts. 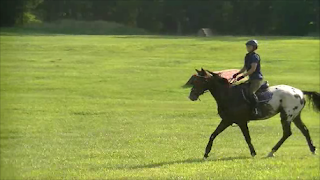 Danny and Romeo warming up 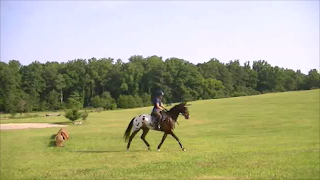 So we finished warming up and Dan was starting to behave somewhat. Kelly called me over and shortened my stirrups a hole and told me to thin about kicking my feet in front of me and sinking down and then asking for a downward transition. She said this way, he'd do his downwards from his butt, and eventually, I'll add leg and use that to half halt and encourage collection rather than take it to the full downward. So we did a few transitions and within 2 or 3 of them, he was coming down a gait without reins. :) Smart baby! So then we were ready to jump! 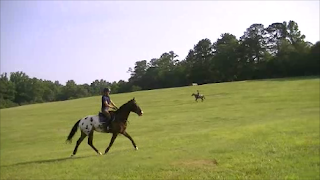 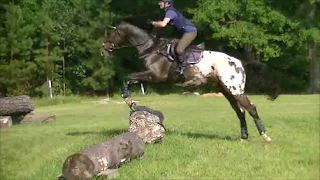 We started off over the log. We trotted in and then cantered out. Dan ducked his head once but other than that, he was quite polite on landing and we were able to canter politely and pull up fairly straight even. :) Kelly had me shorten/weaken his stride a bit, almost to an underpowered trot, but he was still jumping pretty well. She said for now, let it be underpowered. :) Then we progressed to two logs and then even to the two logs from the trot and then cantering on up the hill over another log. I thought for sure that when we kept cantering up the hill, Dan would decide to bolt for home, but he was a gentleman and we had a very polite little 3 log course going. :)
So then we headed to the ditches. Dan walked over it like it was no big deal. (Because it's not.. he's been hand walked, ponies, long lined and ridden over them for years!). Romeo had some issues so we had to walk over it a few times as a lead. And then a few more times. Danny was a hoot. He kept walking and grazing and looking at Romeo like "what dude?! It's just a ditch". So then we moved over to the BN one and we trotted it a few times. He was a little goofy but not bad.
Danny jumps the ditch
We then carried on to the bank. And of course Dan was a superstar and hopped on up like it was nothing. I joked that the downhill would be exciting and that goofy horse just dropped down like he'd been doing it his whole life. (Which, he kind of has, but he's never been that calm and collected about it!). So we worked on me. Kelly had me almost pinch with my knee going up the bank, and then coming down, she had me keep my butt in the saddle and slide/scoop it sort of. I swear that I had tried it with Fleck but could never master it, but I was able to get it done correctly with Dan. Yay! So then we were done. :) Both baby spotties are superstars in the making! 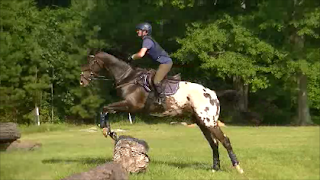 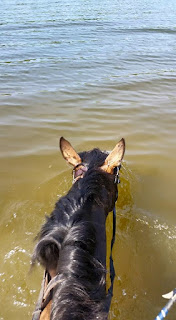 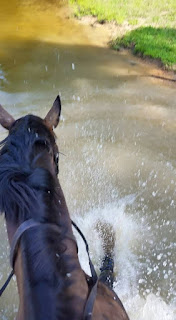 As their reward, we headed to the lake for a splash. Dan had fun playing. Romeo took some convincing to get in and then he wanted to roll. But they had fun. :) 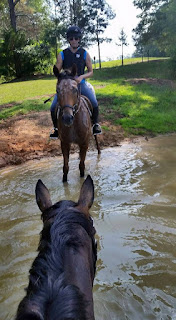