So.. very interesting day. Kathryn came to teach us lessons. And it was a riding lesson but incorporated a lot of biomechanics. Which is awesome. But totally crazy and difficult!
It's like the backwards bike. Crazyness. (so the backwards bike... there's this video on youtube of a bike that has a swivel so that when you turn the handlebars to the left, the bike turns right. And vice versa. And because you learned to ride a bike one way, you created this pathway in your brain. And it's there. It's the reason you can not ride a bike in 20 years, hop on and go. But when you get on the backwards bike, your brain cannot process the change and you cannot ride the bike. You can tell your brain, fine.. it just turns backwards.. so turn left to go right. But the pathways in your brain are stubborn and refuse to believe you. So this guy keeps at it and it takes him 8 months, but he succeeds in retraining his brain to ride the backwards bike. His son, who is 6ish.. learned it in 3 weeks. And then the guy can't ride a real bike when he gets back on a normal one. Only it only takes him a few minutes or days to relearn on the regular bike.). So yeah... I'm basically having to retrain my brain. Which is SOOO Frustrating!! I KNOW how dressage is supposed to work. And yet somehow, my brain and my body keep doing it wrong. Sigh... And I've convinced my brain that my body is correct, yet it's so not. Lies!!

So yes.. it was very cool and interesting. Here's what I learned via Kathryn.

Danny tends to lock in his lower back, so I need to make sure to keep his back moving. Especially during transitions. And to do this, I need to keep my back moving. It's the whole swing right and left while swinging forward with my pelvis trick. And when I ask for the upward transitions, I do want them promptly, but I need to give him time. It's not necessarily him being lazy in the transitions sometimes. Sometimes, he's just figuring out where to put his feet. So I need to give him that time to get to the proper gait. 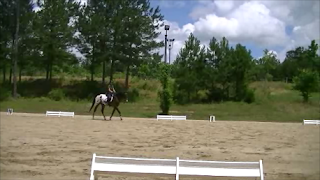 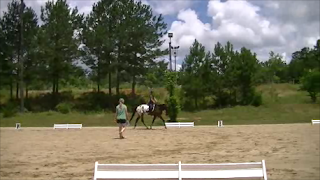 When tracking to the right, I need to not focus so much on the right rein/right bend, because it's too much. I need to retrain my brain that straight is straight, not counter flexed like I think. I need to lengthen my right leg, which means opening it up at the hip and lengthening my femur almost. That puts him where his ribs need to be. Then I can support with the left rein and let him lead with the right shoulder. When I open up my right side, it allows him to lead with the right shoulder. Kathryn equated it to the hunter riders who have flowing hunter rounds. It's not necessarily that the gather it all up and restrict it. They let the right shoulder flow and lead and the rest of the body follows. But he has to be straight and up on all four legs. And it works. We got an AMAZING right lead canter. He got straight and then his body was able to come up and round. It was Awesome! (Unfortunately Peri had left to go tack up Sunny so no video). 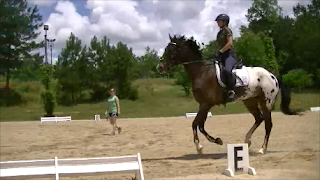 Tracking left is much harder for my brain. I want to pull that right shoulder in because I feel it flying out, but instead I need to think about pushing it forward and around. That is NOT accomplished by crossing the right rein over, or even half halting on the right rein. It's by contracting the left side of his body, and allowing the right shoulder to lead. So I have to almost open my outside rein, look to the right to allow my right hip to come back. But not just my right hip, also my right shoulder. Support with the left rein again. It's totally the opposite of what my head is screaming at me to do, but holy crud, if I can make myself do it, it totally works. We got a few steps of nice canter! It's much harder on this side for him. And for me. (And looking back while editing this, my brain is still screaming... wait? That can't be right... Didn't I just type in an earlier blog about how I need to shorten that outside... well yes, but that is done by creating straightness. I think in my brain I feel that outside shoulder fly out and I want to fix it by shoulder in. So then I put my outside leg on and start crossing my reins. And in reality, I need to fix it in the hind end. And that is done by bringing my outside leg slightly back, bringing my outside hip and shoulder slightly back, and support his weak left side.)....(I think! Egads.. this is tough!). 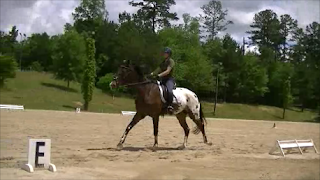 For his halt and walk transitions: Dan tends to wiggle and fall to the right. So to help keep him straight, I need to ride him forward and up. I can think about almost lifting his back with my seat into the walk and think about going forward so he doesn't fall back. I use the same thought process with the stepping out into the walk. I need to support that right side so he doesn't fall, but still focus more on the straightness and forward.

During the leg yields, Kathryn really wants him to slow it down during the leg yields so he has to contract his abdominal muscles and lift that inside hind, rather than just flinging it. She said to slow it down, ask almost the same as I was asking for the walk to halt transitions, so he has to contract those abdominals, and then ask. I only want/need a step or two at the beginning because he will be using his core. Then I can gradually build. That way he's actually using his hind leg rather than just flinging it around. 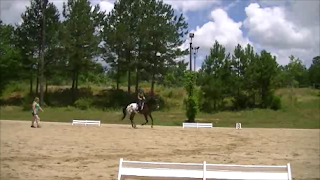 So yep.. it was a very challenging and brain occupying lesson. But Danny felt pretty darn good and we had some good moments.