So.... since baby horse is 4, we get to start jumping! Liz and I all got together and set up the first grid from Jimmy Woffords grid book. And then we got started. Liz rode Party and I rode Dan. We started out okay, trotting over poles. I'm going to have to work on straightness with Danny some. And then we started setting up the cross rails.

Oh, clutzy baby. He's still not quite ready to be jumping. It was funny because he was jumping but it was like each crossrail was a surprise. He was like "la la la la...oh, jump...la la..oh, another jump, la, huh...another jump... la la... oh wow, another jump". Oh silly baby. But he did the grid willingly and happily. It was just that he was a little surprised by each pole. Towards the end he was figuring it out a little better. I was having a hard time staying with him and keeping him straight. Liz pointed out that I needed to squeeze the toothpaste out through the entire line. Doh! Grab mine a stride out and then keep my legs on all the way through. He is not self propelled like Fleck. :) Oh, and I need to finish my line. I tended to drift to the left or the right afterwards and fall into the downward transition. I'm not letting him learn that icky downwards are okay. We will finish with fancy downwards and straightness! :)

So after we got through the full grid a few times we kept cantering on and tried a line.
It was a single line of two jumps - a vertical and then a small little coop. Cantering in was not a smart move. He couldn't figure it out. But he was brave, and despite me landing in a heap on the backside, he was good and didn't buck me off. Trotting it was much smarter for him. So we trotted the second time and our in was better but our out was icky again. He just couldn't compress or expand himself to get the distance. But he was at least heaving himself over it rather than not jumping it. So there is that. ;)

So...the plan is to back off, do another year of hacking and dressage because he'll get it, but he's just too gawky now. Liz said he's going to be SUPER NICE and is super scopey, so just wait him out. :) It's going to be hard though because he is fun. :) 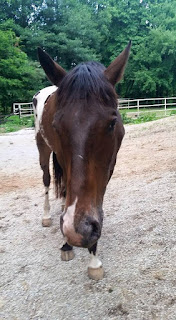 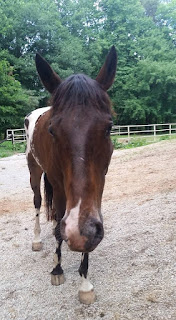 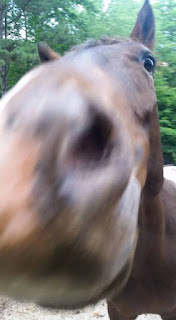