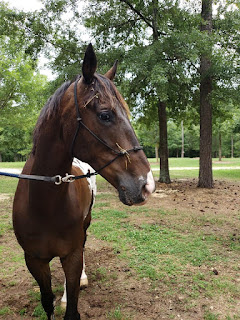 So.... since my truck is in the shop, and my trailer is also at the shop getting maintenance, we had to hitch a ride today. Luckily Kelli was sweet enough to come get us and take us to Ashland. Danny was a bit... electric... today! We unloaded and someone walked down from the jump arena and he was on high alert... snorty and shaky and even after the lady left, he was all on edge. I got on a smidge early and walked him up to the jump arena and he tried to spin and bolt 3 times! Which, really isn't like him. I mean, not really. But we got up the arena and he realized that there was nothing going on and he was fine. So then we went and did some dressage. He was a good boy. Our trot work started out mediocre, but our canter work improved as we went and then our trot work got nice :) We had fun. We got some nice counter canter work and played a little with the half pass. It's just so hard for me without a mirror. I just can't quite figure out the angle. Kelli was helpful and gave me some pointers. And after playing with it for a bit, I almost feel like Dan is better if we start with a haunches in, and then add the shoulder angle and the sideways. It's definitely harder tracking right and I need to keep my shoulders from collapsing and my leg down and asking for bend. I also need to be steady with my outside contact and I can move my inside rein laterally, but I can't really move my outside rein laterally or he starts to fall in. (Or I do... one or the other). Anyways, it's just something that we'll have to devote more time to in order to really figure it out. We did finish with (what felt like) a pretty amazing medium trot!! Down centerline, but still. It was bouncy! 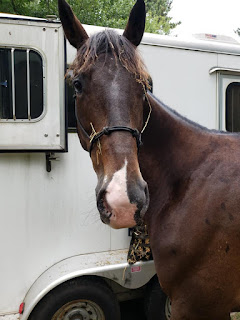 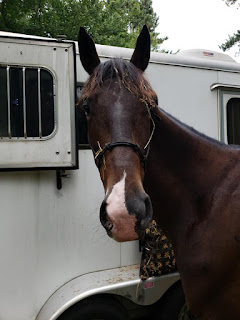 Then we went for a nice hack. Danny splashed in the lake a bit and got his second wind. We hacked for a little bit and Dan was getting a bit bouncier as we went. So... Kelli was sweet and allowed me and Dan to go for a little jaunt. I was in my dressage saddle and had forgotten to grab gloves from the trailer, and had the nathe bit in, but.... we went for a canter up the steep hill. Dan was still a bit attached to Arwyn so it wasn't a mad gallop. Which is probably good as there were a ton of branches down! Some were jumpable, others weren't. Then we trotted to the cross country field and then once we hit that, he opened up and galloped! Right as we got out to the field, he squirted sideways and I lost one stirrup. It is a lot tougher to get your stirrup back in a dressage saddle at a fast canter. :) Luckily I got it back before he dropped a gear and took off. We had fun! And then he put his head down and started bucking!!! Um... no. ;) hee hee. Surprisingly I was able to pull his head up fairly quickly and easily. He dropped another gear but by then we were awfully close to the lake, so I pulled him up. We then trotted back to where we left Kelli. We managed to spook some deer and Dan at the same time. ;) I am telling you... he's all cracked up lately! I'm not sure if it's the new feed, the lack of the stomach ulcer, the minimal riding I've been able to do... or what! But he was all jittery and jumpy! We got back to Kelli and had a polite hack back to the trailers. Yay!!! I'm soooo glad she was able to come get us and let us go play!