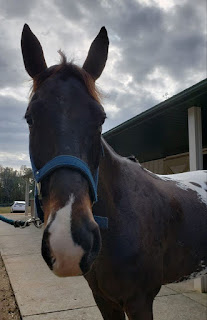 Today was fun! Danny was in a fussy mood and was making faces at everyone today. But he was pretty good. We worked on me and my position some and my arms. Team T-Rex Holly!!! I keep straightening my elbows and pushing my hands forward. No!!! Also, I need to make sure to keep my right elbow at my side especially. That's the side he likes to lengthen. And today, when we were trotting, I pretty much rode slightly haunches out (more thinking that with my seat but also asking him a bit too, only... only asking as much as needed to get him straight) and he didn't feel lame. :) Yay! Then we worked on the canter from the walk and we got it to the left after a few right leads. The good news is that I'm actually feeling it better now and able to control my body better to get it now. It's just still awkward and not smooth and pretty. But it's getting better. Then we upped the ante and did the 3 loop serpentine both ways. And I was able to get it. Though when we had the right lead Cindy said that my right leg was going to his girth again instead of into his shoulder. I was trying. So she walked next to me and showed me how she wanted my leg. Um.... I swear it felt like my foot was literally perpendicular to his body wall. I looked down and nope.. it's perfectly parallel. Doh! But... seeing that and feeling that was good for my brain. It was like... OHHHH... and then Cindy pushed my leg into Dan and basically had me feel it, so.. it was easier to do it after that. Still hard, but easier. At least mentally... And when I did do it, his canter got LOVELY and he held the 3 loop so much easier. So then we went back to walk to canter to the left lead and struggled a bit again. We did the 3 loop okay, but... going back to the walk to canters... I could feel his crookedness, feel my crookedness, and most of the time I was actually able to fix it, but then... he'd pick up the left lead and immediately swap to the right. No Dan... I'm impressed you can do such smooth changes, but No! So we finally managed to get everything coordinated and get myself to coordinate my leg and seat aids to keep him going and to keep him going on the left lead. So then we tried to do the counter canter on the short side and he kept breaking. We finally got it. So then we did some trotting and then Cindy let us finally pick up the right lead. Ha ha.

So yep, fun but challenging lesson. :) :) I'll be so glad when both of us get stronger in our straightness and it isn't such a struggle. 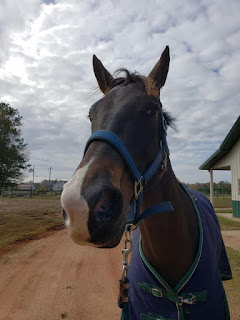 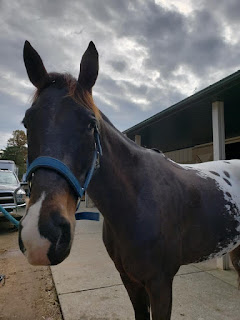