Today was jump lesson day with Beth. She had the wheel of Death set up. It was fun. ;) Even with me being directionally challenged. So the wheel of death is one center standard with four fences set off from it, one at noon, one at 3, one at 6 and one at 9.  However, before we started she had me trot and then canter the cross rail but four strides out, soften the reins. She wanted me to almost let go so that he had to think about it himself. It was hard and it took us both a few tries to get the hang of it. Beth pointed out that this was not an all the time thing. This was very much ONLY to be used for some homework...when I was just popping over small stuff. Just to help him figure out how to use his body on his own without me.

So then we started on the wheel of death and I was told to keep the contact now. :) The main point was to KEEP HIM ROUND and KEEP HIM counterbent all the way to the fence on the left lead. He wants to throw that right shoulder out sooooo bad... and counter bending keeps him straight. However, at some point my brain blew up and I was counter bending him the wrong way for the turn. We added in some fences in a line after the wheel of death and coming to the one fence, I was on the right lead, so I was counter bending left. But then we had to do a sharp turn to the right and I kept counter bending left.... Which was correct... BUT... I had to make the turn, so I had to actually get him to bend right. Duh. I figured it out and we got it and we ended on a good note. :) 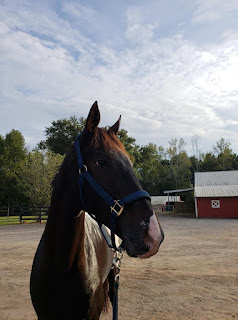