So... that was an interesting weekend. We entered the First Level Championships and the Novice Horse Trial Championships. Both ran on Sunday. Which was nice, as far as stabling, but a lot to do in one day. Luckily the weather wasn't too terrible. I was hoping to get there earlier than I did because I had offered to volunteer too. They needed me to jump judge at noon. So... I got up early, got Dan bathed, finished the little bit of packing I had left to do and off we went. I also wanted to get a good parking spot as there was some confusion on my end about hook ups. So I got there and found the hook ups. I got Dan unloaded in the barn by the office and then parked the trailer. The hook ups were at the top of the hill above the barn Dan was at, or way on the other side of the barns. So I managed to back my rig up super awesome right next to the hook up. Only to realize it was the wrong hook up. I had parked in the 50 amp one instead of the 30 amp one. Sigh... Luckily I hadn't unhitched yet so I backed up to the other ones (which were more crowded) and got backed in easily enough. I went to plug in my cord and.... son of a bitch... my cord isn't long enough. I only had a 25 foot cord and apparently the back of my trailer to the gooseneck is more than 25 feet. But there was only one other open spot for hook ups and Kelli was going to go there, so I couldn't park sideways so my cord could reach. Argh!!!! At this point I had to go jump judge so I just unhitched and went to go volunteer. Luckily they didn't need me so I was able to try to figure out my trailer situation. I was hot and cranky at this point. I checked with the office and they were awesome and tried to help but really didn't have any way to help. Then I called Josh who was there watching Amanda, and he came to help, but his cord wasn't long enough either. I tried calling every place even close that would have another cord and either they only had a 25 foot cord with no connectors or they didn't have a cord in stock. (In retrospect, I think I MIGHT have had the connector but regardless... ugh). So then I called Kelli, who was having a rough day too. I confused the both of us and thought that her plug was a regular extension cord plug, like the one you use in a house. So I was like "cool, I can take up her spot too" and she can park on the other side of the parking lot and plug into the barns. So I did that and was able to park sideways (Or Josh was able to park it for me) and I got hooked up and got the air running. So then Kelli showed up and ... man, I messed up. Her plug was the same as my plug. Unfortunately her cord was even shorter than mine, by far. And she didn't have a connector and longer cord either. So... even if I hadn't have parked sideways, she would have had to park sideways too. We discussed moving to the other side of the parking area but that was way far away from our stalls. I suggested that maybe she just plug her fan in to a regular extension cord and park by the barns but she said she would be fine without. And they gave her her money back for the hook ups. I felt terrible and offered to let her stay with me so she can have air, but... I was not real thrilled about it as it's a tight squeeze anyways. Good thing she didn't take me up on it as I slept for a total of about 45 minutes... 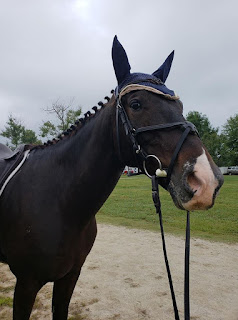 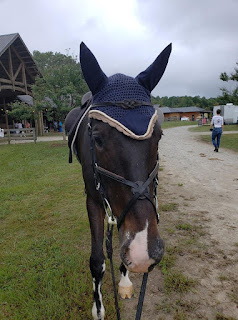 So... after we got that squared away we decided we needed to chill and we went and got some food and looked at the vendors. And I did find an awesome C4 Unicorn belt! Whoo hoo. And I walked stadium and then we walked XC. It looked fun and like it should ride pretty well. Except there were two spots I had a little concern about. One was a brush fence heading towards the water. It was close enough to the water that I was afraid he'd get to the base of it and THEN notice the water and skid to a stop. The other was at the end of the course... it was at the top of the hill. It was a small coup and then down a steep hill that rolled to the right too bending line to a skinny. It was a tough line. But the rest looked fun.

So then we went to ride. Danny was super and warmed up quite nicely and put in some great work so we hacked around a bit waiting for Kelli to finish and then walked around the grounds for a bit. After that they had the competitors party and we ate a little bit. Then I showered and we went to bed. For whatever reason... it was like... oh hey, I'll get to bed early as it's only 9 pm. But then next thing I know it's 11:30 pm and I'm just laying down. And then I had to pee like 45 times... and I swear I was awake all night other then 30 minutes split into 6 periods. Ugh.

But... I woke up and took Dan for a walk. Cindy showed up and was my ray of sunshine. And... I was all pumped because I was wearing my new unicorn belt, my unicorn narwhale socks, and my unicorn stock tie that Cindy had gotten me for Christmas!!! I was a badass!!!

I got Dan all spiffed up and we went and warmed up. He warmed up quite nicely and we went in for our novice test. I thought it was a pretty nice test! He was quiet and submissive and very rhythmical. I was quite pleased with it. :) We ended up scoring nicely and were in first place of 4 or 5. :) yay us.

We came out, warmed up a hair more, and then went down to do our first level test 3 test. He was good and there was some really good moments, but it wasn't as steady or consistent. And there were a few moments where he got super collected and bouncy but got stuck in that and couldn't go forward. And a few times my half halts were too strong and he just... almost halted. And then down centerline he picked up the right lead canter for like.. half a stride. And despite a beautiful leg yield zig zag in warm up, we totally screwed that up in the test. I felt like our trot lengthens were pretty good though. We ended up scoring decently and were 2nd out of 4. Kelli was right behind me in 3rd. We were both a little bummed... We were really hoping to get 1st and 2nd, but.. 2nd and 3rd was okay too. :) 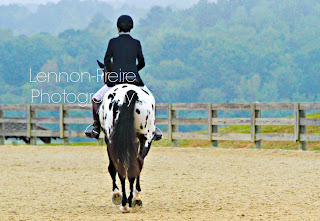 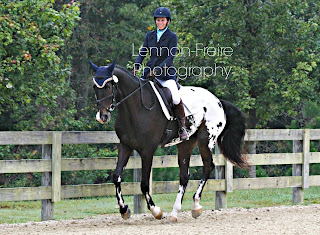 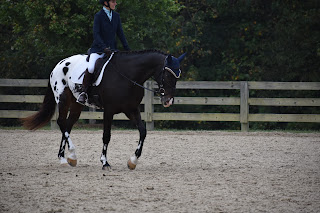 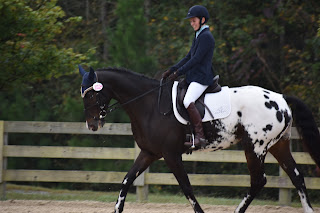 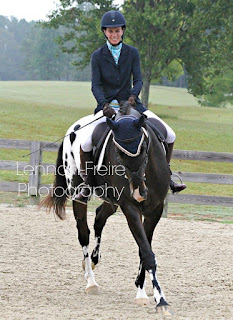 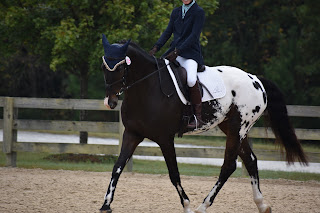 So then it was a little bit of a rest, but not much, and off to stadium we went. Apparently they were running early and I guess I wasn't going as fast as I thought, because I got down into the warm up ring and trotted the first cross rail and she said I was on deck. Um... what?!?! Ack! I kind of panicked and asked if I had more time and she said yes, but not much. So I jumped a few fences and ... it wasn't great. But it wasn't terrible, AND there were no antics. (Possibly because he didn't get a chance!). And then they were waiting on me, so.. in we went. Bless his heart.. he was actually quite good. We went clean and ended up with a few seconds of time for being too slow. What?!?! I guess fixing our lead at one point and then maybe I took too wide of a turn once or twice?? But that's a first for us. Anyways, we still managed to stay in first place. :) 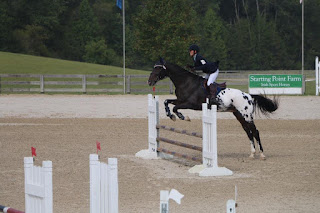 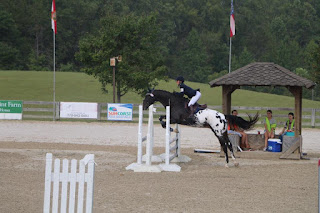 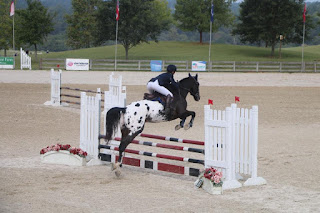 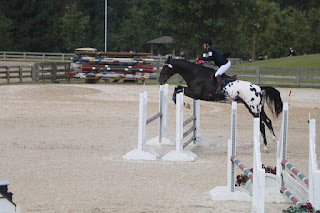 Next up... Cross Country!! So... I over compensated for stadium and we got to warm up WAY too early... like 35 minutes too early. So I just sat there and let him chill. Finally we were close enough to going that I warmed up and then off we went. I was aiming to be a bit more forward since we were too slow in stadium. So the first few fences were great and a bit forward but not too fast. Then we got to the water and he was the bomb! He just went right to the brush fence and right into the water. He did trot once he got into the water and then picked the canter back up... the cross canter... so we went up the bank on a cross canter, but.. we went. The rest of the course went great... the half coffin was lovely and so was the other fences. Then we slipped a hair over the big oxer but he didn't seem to mind. We crossed the road and were heading up the hill to do the last three fences, the first two being that tricky line. And... Dan bolted!! Like grabbed the bit and bolted. Up the hill. I managed to get him back under control a few strides before the combination and he jumped that combo beautifully. Then we rolled down the hill and I realized at this point that we were WAY too fast. WAY too fast. But my brain couldn't quite comprehend what to do about it so we cantered at a polite novice, maybe BN, canter to the last fence and I tried to collect him a ton over the finish line, but... we may have finished 15 seconds under speeding ticket time. Oops.... And you know... part of me was like.. "There goes first place", but part of me was like... "Heck yeah. I KNEW we weren't too slow!". So... whatever. At the end of the day it was a fun course and he was super. The loss of 1st place was something I could have fixed easily. And... I really didn't mind. It was just a fun day. I ended up 2nd so we got two reserve champion ribbons and some fun prizes. Of course... I was a little bummed because the ribbons were an awesome dark tri-color. So first place was navy, burgandy and gold. A NAVY RIBBON!!!! And I didn't get it. Drats... 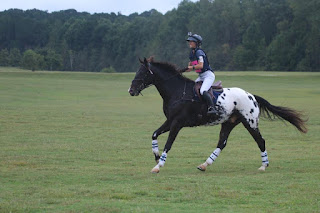 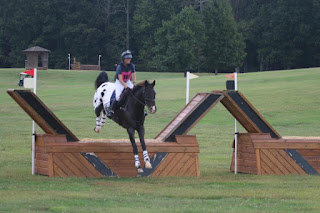 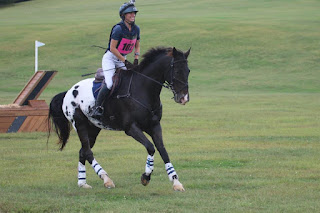 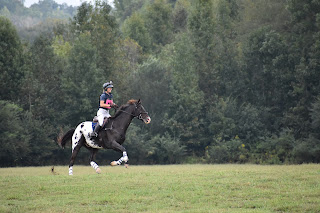 I'm pretty sure this was the exact moment that his turbo boosters were engaged! 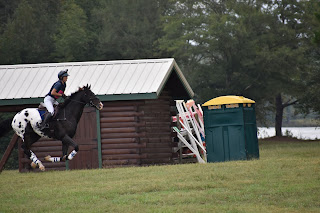 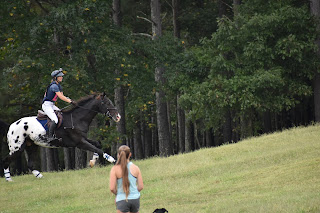 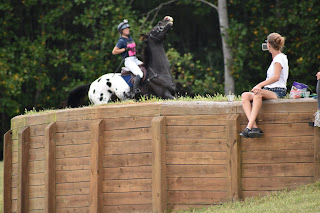 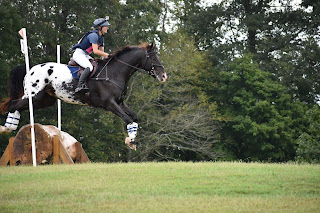 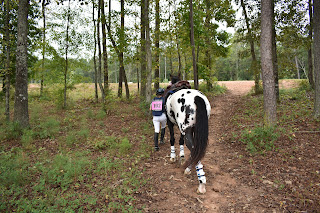 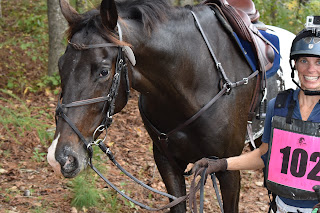 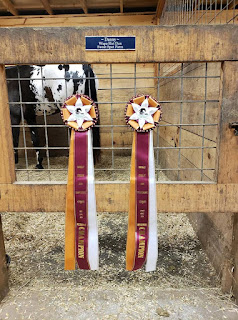 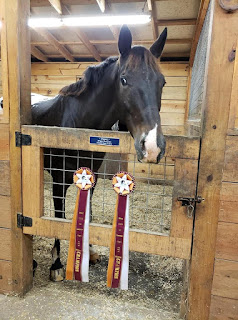 Fun weekend!! And very proud of the rugrat :)