So... I was brave. I took Fleck and Danny out by ourselves on one of the first REALLY cold and really WINDY days for a trail ride! And I managed to even get pictures ;) ha!!! 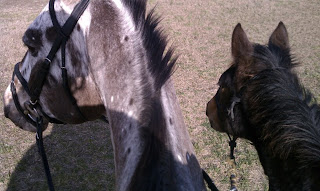 No worries though.. they were both pretty good. Sorta ;) Danny definitely needed to let off some steam and be mentally stimulated. I maybe should have renamed him "Little Fleckers" for two reasons! ;)

I started by loading them in the driveway instead of in the pasture and Danny had to think about it, but eventually got on and stayed on. He wasn't bad, just... "nah, I changed my mind" and calmly backing off. But we got on after 3 tries and stayed on. Hauled fine to the horse park and I decided to go to a new spot. He was good.. NOT pokey this time :) And wow.. the boy oversteps by a good 4-6 inches! (Though at times his walk did get lateral... that's bad isn't it!??).

So... we started off and they were both good but as the ride went on, Danny got friskier. He kept trying to bite poor Fleck. So.. he got some smacks and we carried on. We even did a little trotting and Danny even did some cantering. Then at the end, he did a snort, buck, rear, run thing...  I managed to keep him under control though. We walked up and down hills, through roots, in the woods, in the fields, etc. He was great. But clutzy!!! Jeepers... He's as bad as Fleck!!! I thought I was getting a mountain baby! Hee hee. Then we accidentally ended up on the human path I guess cause we came to a bridge. Now keep in mind... this is almost the exact same bridge as Fleck has crossed on numerous times, but... because this one was NEW... it was SCARY!! Fleck was snorting and dancing... Danny was like "what is the big deal"? So... I managed to get Fleck to go next to it, although he did manage to squash me into the tree and prickers in an effort to get as far away from it. Danny almost walked on the bridge next to Fleck. Way to show the baby there's nothing to fear Fleck!! Doh! But anyways... we all survived and I decided to not push the issue of getting Fleck over the bridge with the baby in tow. I know he would do it... he was just being silly. So then we came to another one, so I thought fine... we'll just go next to it. But there was a creek. No big deal... Se we go across and Fleck is being silly and spooky and jumps the tiny little stream. I turn around and see Danny jumping it too!!! Awww!!! Good eventing pony!!! 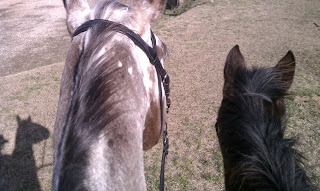 So yep.... That's about the extent of it. Oh, we also went down to the bank complex left over from the Olympics and Danny went down the steep grassy bank, then up the steep bank, then through the covered bridge (cause that one doesn't scare Fleck... sigh.. but it's not new, so.. okay). He didn't even flinch. He also sniffed the big giant roll top tables!!! I told him he had to wait a few years, but then... they're all his!

Success.. We all survived, no major issues, and Danny got to let off some steam! Oh.. but I lost one glove... :( I shoved them in my pocket so I could take pictures ;)
Posted by Holly at 2:03 PM