So... I'm so proud of my little squirt!!
After our first trail ride, we did another and he was just as good. We went with another friend on her QH mare and had a great time. We got all four feet in the water, but just barely. But baby steps. :) So then I decided that I would take him to the cross country course at a lovely farm down the street. They are PERFECT for introducing babies to the basics. So...we went on a solo trailer ride (he's done it before...one to come home from southern VA, and another trip to the vet and back) and did well. He called a lot, but... so did Fleck!! And actually, the big goober (and by that I mean Fleck...) literally followed the trailer as far as he could with his nose poked to the window! But Danny hauled well and was a good boy.

Anyways, we got to the farm and unloaded just fine. It was a little scary walking to the XC course, but after a few stops and looks, we made it out there. My trainer was teaching lessons, so Danny got to watch the big kids school. And he was great. He wasn't spooked or even too excited. We did one or two little circles around me, but he was very gentlemanly!

Then he got his turn.

He walked in and out of his first ditch, up and down his first bank, and even jumped (JUMPED!!!! Not just walked over.. he hopped!) some small logs. After the third time up the bank (once up, once down, up again) he was so proud of himself he gave a little snort and prance! Squeaaaalllsss!! I love this little guy! We then trotted over another log or two and let him graze. We attempted the water again, and again he drank, but wouldn't get in. I decided not to push it, as he's got plenty of time and it was cool. We then spent another 20 minutes watching and grazing and he was well behaved. He even stood calmly while a young horse got loose and then another horse went on a bucking spree and dumped my friend. We walked back to the trailer and he loaded up and hauled great home.

I'm so impressed with him!!! I think he's going to really enjoy cross country and jumping. :) I can't wait!!! But at the same time.... I don't want him to grow up. He's so cute all little and squishy!

I didn't get any pictures of this adventure because I was concerned about him not behaving. (I didn't have to be obviously, but oh well).  But here's his cute face from another day! 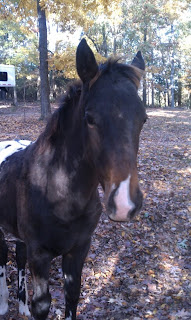