January 12th, 2012:
So.. today was really the first day in a week or so I've had any real free time, and... Danny and I had fun.The morning started out with feeding and I found a brush that was in the barn..... in the pasture. I guess Danny poked his head in the barn window and pulled it off the counter and then played with it. Hee hee. Then I had a lesson with Fleck and as I was hitching the trailer, Dan found the open window and pulled out the bag of carrots and then flung them up and down. Feed me!!!! hee hee. Sensing a little trend here... So I got the trailer hitched and had to chase Danny and Roany off. I even bribed them with alfalfa. Well... Danny was bored and wanted to come I guess because then he started running around, bucking and snorting and carrying on. Hee hee.. It was cute. He did about 8 laps! Hee hee. Luckily, I was able to sneak the trailer out of the pasture and Fleck and I had a great lesson.

So then tonight after I fed I was cleaning up poo and Danny was wanting to play. He kept grabbing the pitch fork. Goof! I think he's bored!! So.. .tomorrow is a trail ride!! Gonna burn off some of that energy. 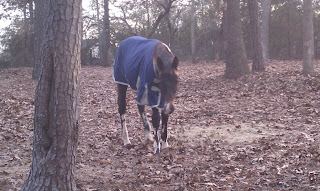 Then tonight, since it was a really cold night, I walked out to bring them water. Which Danny and Fleck slurped down.. and BOTH drooled about half out back on me. Guess Fleck is teaching Danny his quirks. ;) Then Danny and I played a little bit with the water jug. So... guess there is one less water jug for the morning. I'm thinking I'll have to buy him a jolly ball!

So... nothing major, but a fun Danny Day. Tomorrow will be interesting.... It's going to be cold, cold, cold... and windy!! The baby trail ride should be interesting! Stay tuned.
Posted by Holly at 9:28 PM