Today was a fun day. And a sloppy day. I slept in... by a lot! Seriously.... I don't know what it is about this house and this weather.... well, I guess I know exactly what... when it's chilly and cold... and my bed is super soft and super warm and the heat vent is right above me and... it makes it so hard to get up! I swear I've gotten more sleep since we've moved in then I have in 3 years! ha ha. Like.. I think I slept for 9 hours! Maybe it's the cold weather making me sleepy, but I've been exhausted. Anyways... I slept in... ate breakfast.. cleaned the house (which doesn't take much time since it's tiny!), and then ate some lunch and did some invoices. Then I was going to go ride at Ashland and then work on Sky. It was going to be "take your pony to work day". BUT... Ashland was closed! oh no! They were doing repairs to the parking lot, so.... dang! Guess I'll have to ride at home. :) Yahooo that I can actually do that! :) Hopefully my arena wasn't too sloppy as it rained the last 36 hours or so. Luckily it didn't rain hard, but it's not been super dry to begin with, so... I figured it was worth a shot. 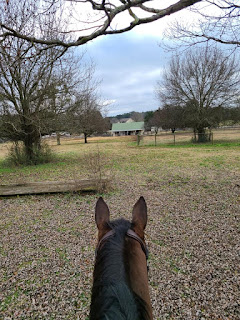 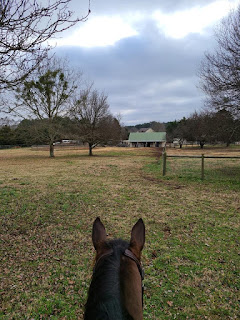 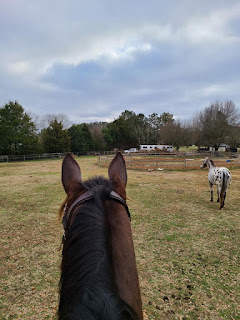 I lunged first and he was so cute! He did great today. I put down two poles for him to trot and canter over, so that he could learn to stay in a "frame" while going over poles. Eventually we'll progress to cavaletti's. Anyways... we had some nice trot and he's looking fancy! He was doing well trotting over the poles, although there was some egg shaped lunging going on, so we didn't hit the poles every time. Sigh. Sadly, it has gotten better. So then we cantered and hee hee.. Poor Dan. It was like he got a funky stride to it every time and kept having to break to the trot. He managed to canter over it once maybe... I didn't get mad, because... it's hard! And new. So I just let him break to the trot. Well... mr smarty pants... saw the pole coming up and even though I had him in the trot, he saw it, sized it up, and picked up the canter and canter over it like a rock star, then looked at me like... "See... I CAN do it!". Hee hee. I laughed and told him how amazing he was and gave him a cookie. :) 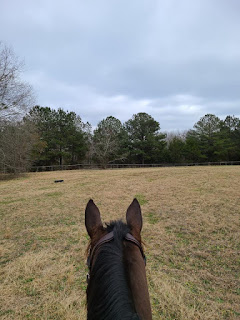 We then headed up to the arena which was not as sloppy as I thought it might be, but it was pretty wet in spots. We were able to ride though. Yay! I was a little rushed and a little.... I don't know... goofy/giddy/silly feeling, so... we didn't really do all of our homework like we should have. We practiced our canter to walk to canter on the figure 8s but obviously not enough. And looking back at the video.. there is definitely more trot steps than I think. Oops. But we were getting the bend right. So then we jumped a little too quickly to trying to get the change over a small fence. The placement of the fence wasn't ideal... because of all the other jumps in the arena and the mucky spots... and I didn't prep him well enough... so... it wasn't great. In fact, I think we only got the correct lead on landing (front and back) once each way. Ooops. then he knocked it down, so we gave up. But we did have some nice work... and I think we're starting to get the trot half passes! He's not crossing over like a fiend but it's a nice start. :) He makes me giggle though. He gets so fired up doing the canter work, especially the simple changes and it makes me happy. We had fun and even played a little with canter lengthens. I think I may have hinted at one canter half pass, which... was about all we got of it, but... still. Oh, and... at one point... I half halted in the canter and he .... propped (for lack of a better word) and kept going, but... it made me think that he was almost anticipating me asking for a change. :) Who knows?! Maybe not... and maybe I'm messing him up, but... we had fun today. And my pivo mostly cooperated too.

Some of our ride today