Danny and I met Abby and Jude at Stoneridge farm in SC for a XC school. It's a great place to go for novice and almost training type fences. It was only like 2 hours away and an easy haul.

We got there and tacked up. Danny was in a mood! He was so bouncy and wiggly. But he let me get on and we walked a lot and then power trotted a lot and then cantered. We didn't have to gallop. So yay. But he spooked at the tiny ditch as we walked past it, so then we had to school it. And he was being spooky and wouldn't go near it. Ha! Goof! We did manage to get over it. He wasn't really scared, he was just being silly. So then we started jumping things and he was great. Well... he did refuse the barrel jump once, which was the first jump we jumped. But then he was fine. I honestly think he was being silly. Because he jumped everything else great!!! Most of it was novice and baby training/big novice stuff. He was awesome! We even jumped a fairly thick squatty corner! And some upright funky things. And did the double up and down banks. And the ditches. And a trakehnher. Nothing too huge though. But he was good for all of it and we had a blast. And he was adjustable!! Like, when I shifted my body, he rocked back and added or moved up for the longer spot. It was so fun! 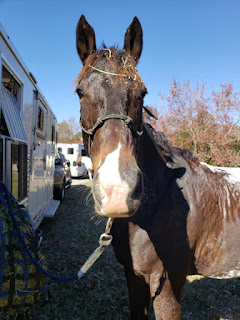 We ended the day by attempting the skinny chevron. Which looked legit prelim size... so maybe it wasn't quite prelim but substantially bigger and more technical than anything else. But it had guide poles/V poles on it, so I thought we'd be alright. I was dumb and jumped the small jump before it, which was on a 3 stride bendy line. So he wiggled and ran out. Totally my fault! So then we tried again, without the jump before and... he sort of tried and then bailed. I tipped up his neck, plopped over his neck and landed on the fence, skipped off it, and landed on my knees with the reins still in my hands. Ooops.  So... I decided that it really was a big fence and wide and tall and skinny and we probably didn't have any business jumping it without a trainer. So we left it. We jumped a bunch more after that to reinforce a good go again and then we were done. 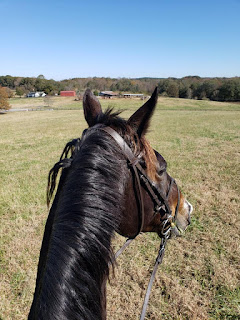 We did a short cool off hack and then I had to hose him off. He was so sweaty and foamy, despite being clipped recently. So then he was bouncing around and just being silly. SOOOO busy.. .busy, busy, busy! We're feeling better about Jumping Branch though. :)