Ha ha! I told Dan he could be feral yesterday. He got the WHOLE Day off Monday. Well, maybe not the whole entire day as we didn't get home until 2ish am and then he got a snack and then I pulled his wraps, but then he was free.... until breakfast... then naked and free until dinner. :) And then free and clothed until this morning. I let him be naked for a bit and then we went for a ride. He was FILTHY! :) 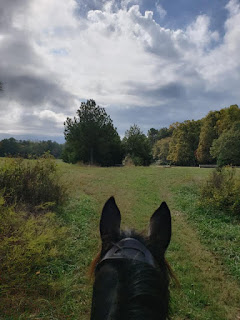 We had fun though. We took Fleck too and I rode Fleck first. Dan chilled. Then it was Dan's turn and the clouds came back so it wasn't as pretty of a picture day. But it was still pleasant! We hacked for a tiny bit and then did a little dressage warm up in the XC field. Then we decided to go back to the arena and do some work. We played with our canter and counter canter and got the three loop both ways, most of the time.. or some of the time. But then I decided.... let's just collect and balance the canter and ask for a change and see. And good gravy if he didn't throw one in there!! When I asked!!!! And it was right to left, which should have been harder! I'm sure it wasn't brilliant and I'm not even sure if it was actually clean, or late behind, or if he didn't skip through it. But it was not a simple change and it wasn't a partial change, so it was something!!!!! :) :) :) :) I praised him highly and for a good while and then rewarded him with a medium trot down center line. :) Then we tried the other direction. Nope. But he held the counter canter. ha ha! Of course. Oh well. I *know* I'm breaking the counter canter for the moment so I'm choosing to not get all ADD about it. So then we did a pass of half pass to leg yield in the canter both leads and went to go hack. 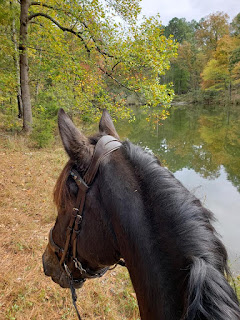 We ran into Erin pretty much as soon as we hit the XC field and trotted towards the lake with her, then left her to work while we went in the lake. Then Dan wanted to find her and Surreal again and power trotted back to the XC field so I made him go back to the lake and then we hit the woods and galloped up Hoot-n-holler. Then we saw them in the XC field again and he ignored them. Silly horse. So then we headed home so I could get the barn cleaned before patients arrived. 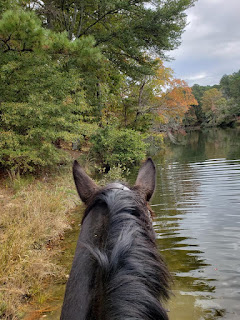 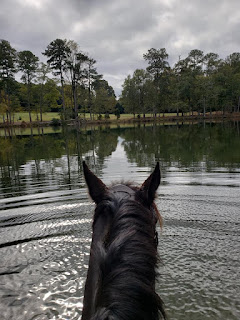 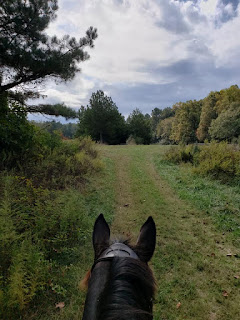