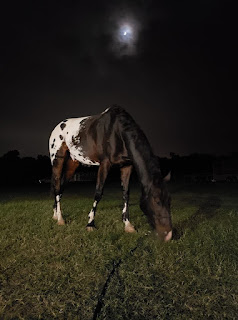 So.... Beth and Danielle and Liz were all going to go to Rocking Horse. It was supposed to be Danielles Intermediate debut. So they invited me for the girls weekend of fun. And then ... Liz broke her leg... and then Rusty got a bone bruise... and Beth didn't have them to coach, so.... I went by myself. :) I probably could have bailed but I had already entered and I figured why not?! It would be fun. So.. we went. :)

I left around 10 on Friday morning, which wasn't quite as early as I wanted, but oh well. The truck hauled great but I can't go as fast as I would, so... we didn't get to Florida til 6 pm. Luckily it was still light out. I got Dan in his stall and settled and found my RV spot. A nice easy spot and good view. BUT.... it wasn't the right plug. Seriously/?!?!? Every freakin' time. So I ran up to the office, caught the poor girl before she left for the day, and we eventually got it figured out. I ended up in a different spot but it was a good spot too. I took Dan for a little walk and went to bed. It was such a nice night out that I had the windows open and my heated mattress pad on and slept amazing!!! I'm sure the migraine pill helped too. Because.... of course, migraine. 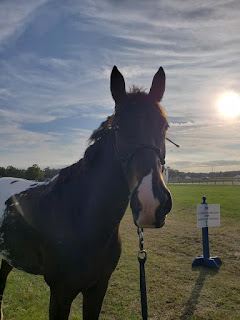 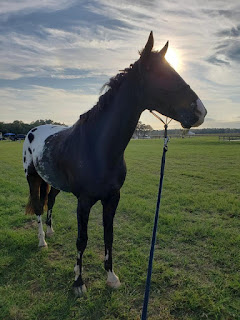 Saturday I got up and took Dan out for a walk. He was kind of a butt... dragging me around. I put him back and walked XC. It looked huge!!! Eeeeeks.... But non-technical. So then I gave Dan a bath because I didn't have time before. After the bath he wanted to roll so bad and I wouldn't let him. And then he just... had a temper tantrum! He was squealing under his breath and started bucking and rearing and running in a circle around me. I was giggling at him because he wasn't trying to get loose or get me. He just.... had... to... move.... his.... feet!! But then he got a little carried away and had to swerve at the last minute to miss a car... and then the TD who was watching us asked us to go to the roundpen. Before we hit a car. Sigh... then she added "IF you can get him to it". Sigh.. so then he piaffed in hand all the way to the round pen. Unfortunately a horse got loose so I had to basically run him to the round pen so I could handle him... then try to contain him until they caught the other horse so he didn't get her more riled up. Sigh... so once they caught her... I let him go and he went squealing off! He did multiple laps and then wanted to roll so I had to smack him with the rope. And then he was all dirty from running in the round pen and then where I had to smack him with the lead rope. Ugh.... But man... at this point... So then I desperately had to pee but was afraid to put him in his stall because I didn't want him to roll and get cast. And I was afraid to leave him tied to the trailer... so I ended up tying him to the trailer and peeing in the trailer. Then I braided him. And.. I had a meltdown...  I mean, not really... I held it together, but my brain was freaking out and I was trying not to cry. Dan was a wild man... I couldn't control him.. he's only novice fit.. how the heck can I control him when he's prelim fit if I can't even handle novice fit Dan?? (Although.... I realize now that he's pretty much prelim fit now... and by then, he will at least have more energy expended). And then his braids were terrible.... and the jumps looked huge. And I couldn't trust him anywhere. Sigh... But he was fidgety and not super for his braids, but.. he was chewing on me and sucking up to me, trying to be cute and snuggly... like a T-rex being cute and snuggly, but... he was trying. ;) 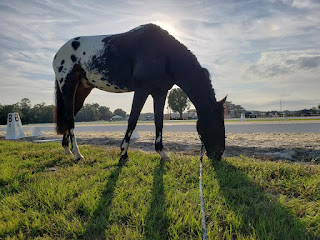 So... I put him back in his stall and took a 30 min nap in my trailer as my head was starting to hurt. And he managed to stay upright in his stall and leave his braids in. So then we got tacked up and went to warm up for dressage. He was a bit braced and a bit resistant in his barrel so we didn't quite get the same degree of suppleness typical of him. He also felt kind of lazy and sluggish. Our test was okay. It was decent... and certainly really nothing wrong with it. It just wasn't as brilliant as usual. But we scored well. 30.8 I think. Which put us in 7th of 13. So... again, a mediocre test. We took another break and then it was time for stadium. Maybe it was the migraine pill or maybe it was just that the jumps didn't look huge but I wasn't too nervous! We warmed up and after a few sticky fences, we got in the groove and jumped one of the oxers like beasts! It felt phenomenal. So we went in and jumped a pretty darn nice round! It was smooth and clean and I didn't jump up his neck on any of them I don't think. Whooo hooo!!! That was exciting. The jumps felt small for novice, but Dan jumped well. We ended up moving up to 5th with that. Whooo hooo! I let Dan graze some more and we walked some more and I had dinner and a shower and went to bed early. Again, I slept amazing! 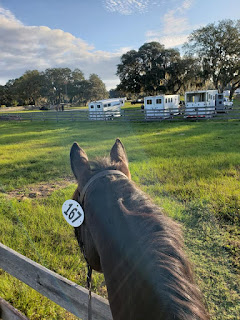 Sunday I decided I would get up and ride him rather than try to hand walk him. So we went out in the dressage fields and did some power trotting. He felt much happier and was behaving. After we did some work, I let him meander around, figuring he could graze. He didn't really want to graze but wanted to people/pony watch. He was hilarious. He was like some awkward creeper just staring at the people and their horses grazing. I just kept saying "I'm sorry.. he's homeschooled". ha ha... Then he went back to "jail" and I walked XC again (it looked much less impressive this time!) and looked at the shops. I ordered my photos too because... he looked so good in most of the stadium ones! I told the guys that I hoped that he didn't dump me after the first XC fence again because I was going to order all the photos. ha ha. Finally, finally it was time to ride XC. My ride time was 3:13 pm. I got ready a little early because... you know, stress.....  And then they were running 30 minutes behind. So... we hung out for a bit and chatted with Elisa. Then finally we got to warm up. He warmed up well so off we went. And it was a pretty good run. He was a little behind my leg to the first 5 fences or so... including the big scary one. But he jumped everything and didn't even think about being naughty or not going. We just hadn't gotten into our rhythm yet. We finally settled into it and then he was on a roll! Except I got lost! After the 11th fence we were just cruising and I could not find fence 12. I didn't even remember what fence it was. Luckily I remembered that it was past the tombstone fences so we rode back that way and then I saw 12a and b. Yay! We finished the rest of the course in great form and luckily, we didn't get speeding tickets or time faults! If anything we were close to speeding tickets than optimun even with the detour. Hee hee. After we crossed the finish line, I asked him to come back and it took him a good bit to come back to the trot and then he was power trotting for a bit. I was laughing at him.... "where are you going" We're done". Ha! I finally got him down and then he was jigging back at the barn again. But yay!!!! That was so much fun. :) And we moved up to 4th place!! Yay!!! 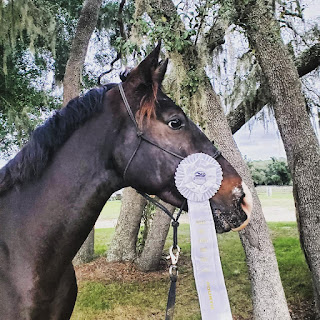 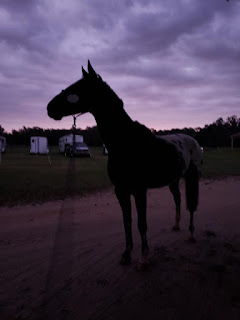 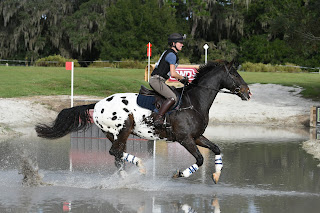 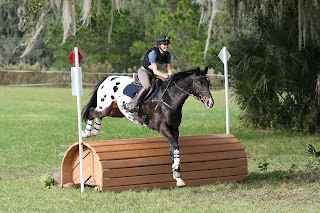 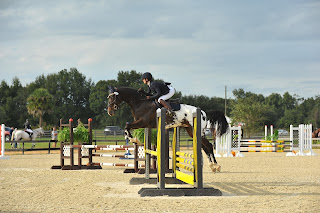 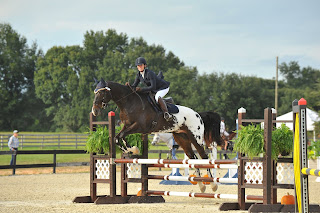 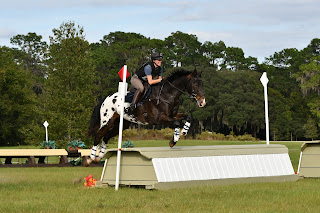 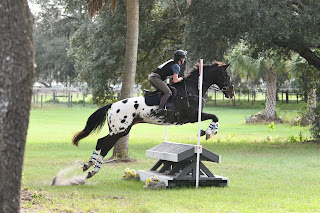 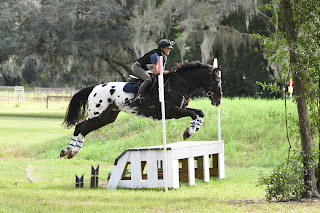 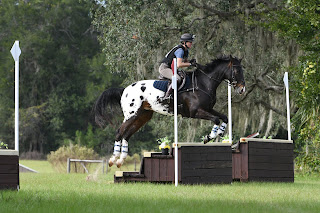 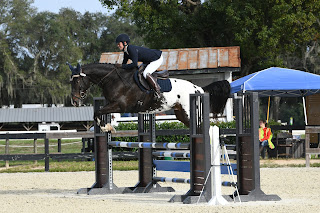 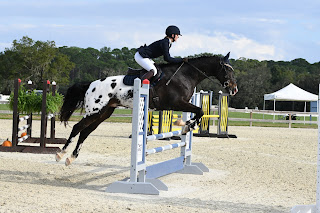 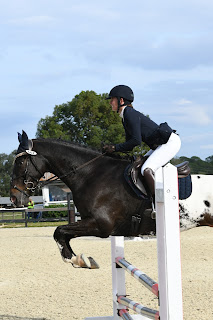 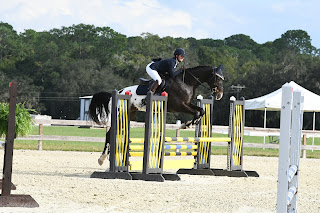 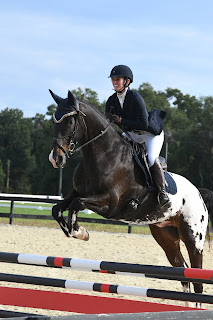 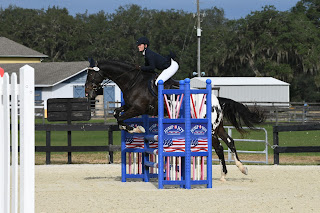 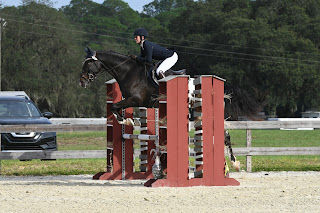