Why all the feels today?? 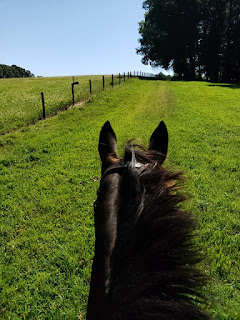 Maybe because today I was expecting to be trotting down centerline at the Kentucky Horse Park. And I understand.. it's not a given. And it's not the end of the world that we're not there. And obviously, we couldn't get our crap together to get there, so it's for the best that we're not there. It's just... I've been sort of aiming for this since we got injured two weeks before the AEC's a few years ago. We didn't get to go then. And then we spent the next 7 months recovering so we weren't qualified and ready that year. And then they were in Colorado. So now, they're finally in Kentucky... and in November we ran our first two novices and qualified score wise. We just needed one clean cross country run. It shouldn't have been that hard. But... clearly it was. You would think with two attempts.. and two attempts at the same venue.. with almost the exact same course (that wasn't planned on my end, but... life happens...). So yeah. Maybe that's why all the feelings? Maybe add in stress from putting the house up for sale (and where the heck are we gonna go and how can we afford to get what I want for what we want to decrease our budget to?), stress from Mike problems, and stress from just.... life.. Add in the fact that I feel like we've accomplished nothing this year. No AEC's, no South East Schooling Show Championships, and not even qualified for year end awards with GDCTA. I feel like we haven't gotten anywhere. Although, we did get our second level score towards our bronze medal, so there is that. Maybe I'm just tired and need a nap. But I ended up crying on my way to my lesson. Which is just stupid. It's a beautiful day... I have a very blessed life... I"m going to a lesson on my wonderful horse... So.. God and I talked a bit and I felt better. He's my best friend. I can tell him anything and everything, so I purged a little bit and sang some songs at the top of my lungs. And then we had a good ride. 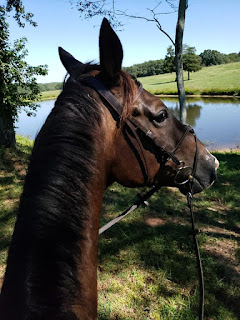 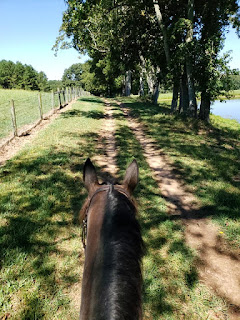 (But seriously.... HOW could one be blue with this view?? What's wrong with me?)

I got there a little early because someone was coming to look at the house today so I had to get out of the way. But it was great because I had time to tack up and then we went for a short hack. And saw Kota too (Chelsea's appaloosa who retired to Silverthorn). Although trotting through the field I swear I felt a lameness. Sigh... Really?? Maybe that's another part of the feeling fest. 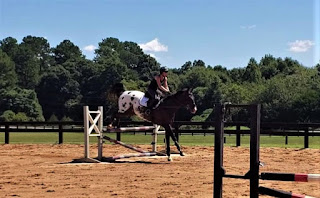 We were jumping today so I got in the arena and he felt great at the trot and then we cantered to warm up and then we put the right sided german martingale (or whatever it's called) on to help me keep him straight. I definitely needed it today again still. We started off fairly small and he was still trying to drift to the right. However, he felt the martingale and then backed off. But if it hadn't been there, he probably would have drifted. I was much better about my hands (mostly!... once I raised them and inverted him pretty bad. Oops!). And we started to string together some fences and it wasn't too bad. He stayed fairly straight for the most part without me having to encourage too much and it was good. Except the butterfly fence. He actually jumped it fairly straight, I just couldn't get the right line so we kept angling it. But he was jumping straight through the aids. Kelly was quite pleased and said that jumping straight through the aids was the goal. And I just had to ride that line better. And I did. And it did get a bit better. So then we set the jumps up a little higher and... then stuff started to go downhill. But we fixed it. It was just that going straight is hard work... and it sucks the energy out. So he had enough forward for the little stuff, but not quite for the bigger stuff. It wasn't terrible. We just kept chipping in and adding a puke stride. I didn't quite ask for a better stride/canter and we felt it. So then Kelly got out the encouragement dressage whip and just waved it around a bit and Dan decided that "oh yeah, Kelly makes me go forward" so he was more forward and it got better again. We finished by adding a big vertical on the short side and man alive.... it showed up the giant hole! He STILL wants to drift hard right. Especially when it's a tight line and he knows he's turning right after anyways. And for some reason I couldn't quite get the distance right to that fence so when it's awkward, the right drift becomes much more obvious. So we took that fence down to a cross rail and fixed the straight. Then we raised it again and kept the straight and the forward and it was good. But it took a lot of attempts. And we felt like we challenged his brain and his body to make him stay straight. So to finish, we let him jump the two easy fences and as long as he was straight and forward we got to quit. It only took two tries. :) 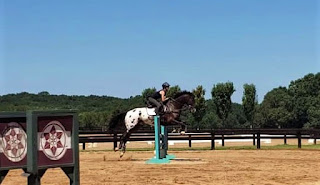 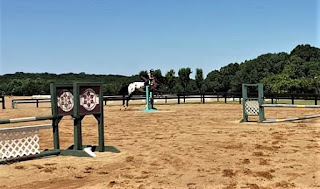 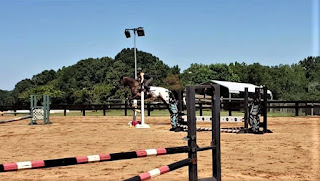 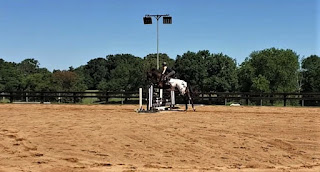 So yay! Right?!?? You'd think. I mean.. it was a good lesson. We made a ton of progress in a short time. I wasn't getting nervous or scared and for the most part, he was going straight or responding to my aids. At one point, he almost started drifting left. ;) So I should have been super happy. And I was pretty pleased. But then... I got home and all the bad thoughts crept back in. And then I watched my video, that Caroline was polite enough to take. And... I'm still tipped forward onto his neck/withers instead of staying behind. I'm still pinching in the knee and losing my landing gear. He still is jumping over his shoulder instead of really picking his feet up. Why do we still look like crap?? I know it's a process and a journey but today I'm just really frustrated that we seem to be stuck in this awful icky place. And I'm losing faith that we'll get somewhere and be pretty. And I know a lot of it is because I"m looking at all my friends and their horses who are running training level, at the aec's, and looking good. And I can't compare. I know that. It's just hard not to. And now I feel like a terrible mom for not believing in my horse and knowing that he's going to be awesome some day.