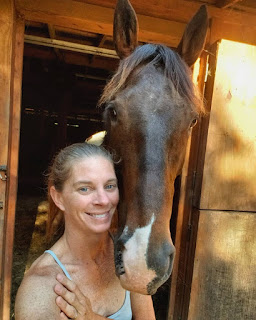 Today I managed to have enough time to get in a lesson with Kelly. She thought that Dan looked very sound and even, but... she saw the funkyness I'm still feeling and thinks it's him being behind my leg and/or a bit weak still. So... my homework is to do a million gabillion and one walk to trot to walk transitions... and then do it again. ;)

It was a good ride though. We started off getting him reactive and forward and getting that "sparkly trot" from the get go. And she reminded me to use the "bam, bam, bam" leg aids rather than always using the stick. The key is to then keep my legs off of him, and to not get sucked into constantly asking him. I ask... he goes... he stays until I ask for something different. I can use my leg for bend, but..... not for maintaining the pace. I can use my leg for more go, more forward, or sideways, but not maintaining. So.. then we worked on the trot and getting him to settle. She wants me to keep my hands slightly wide and not knit! When his head goes up in the air or he's not round, do not knit. I need to keep my hands steady and slightly wide and use my leg and push him into the bridle. I can ask for bend and push his inside ribs into my outside rein. And then when he softens, I soften my elbows. If he breaks to the walk or halt... that's too much rein and not enough leg. If he goes faster... too much leg and not enough rein. And he got pretty straight too! We also figured out though that in the beginning of my warm up, to help strengthen that right hind, I need to ride slightly haunches right. When tracking right and left, if I ride slightly haunches right, he's straighter and engages that right hind more. I just have to be careful that he's engaging it when we're going to the left and not just flinging it out there. I need to remember to keep his head squarely between his shoulder blades. 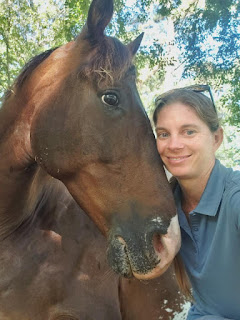 We worked on the canter too and in the upward transitions (and downwards) he flings that right shoulder in. SEE!!!! I was right!!!! So, she had me bring my right rein to the withers and open the left rein in the transition. I just need to be careful to keep my hands even and not raise one higher than the other. Same thing with the downwards. I laughed that he seemed so snappy and dramatic in his downwards. He adds some flair. ;) Kelly smiled and said that he was a bit dramatic but that he was at least doing his downwards with his hind end instead of just the front end, so.. bonus points. :) 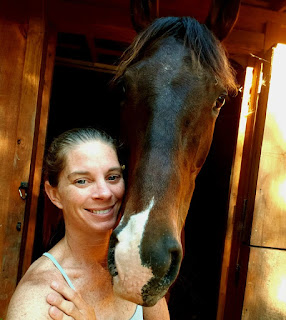 Then we did a part of the Intermediare test!!!! What?!? Ha ha... We cheated and made it doable. We did down centerline, then across the diagonal in a medium trot then halfpass out of the corner to X, then 10 meter circle, then shoulder in to the judge. It was hard... especially because I was trying to maintain that big trot. Then we talked about how to ride the half pass. I explained that I couldn't figure out the angles and how to accomplish it. So... she told me that I should ride the half pass like this..... start across the diagonal and put the letter between his ears. Then... add haunches in. :) However, she also explained that this was not exactly the true way... as it doesn't achieve inside leg to outside rein and wouldn't get an expressive half pass. But it could score a 7... just not any better. But... for now, this is a good way for Dan and I to learn it.

Now to get to doing our rehab/body building rides :) 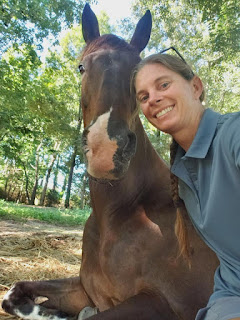