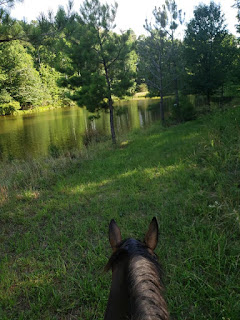 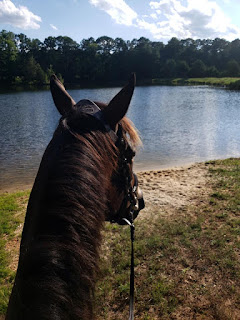 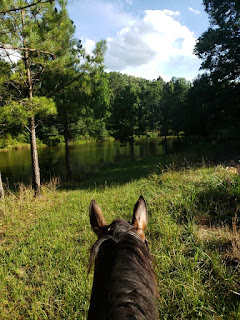 Again with the rain! Sigh.... Dan and I were trying to show at Chatt hills a second time.... We didn't ride til 1 something, so I got up and got him fed. It started to sprinkle and the forecast showed rain for the entire day. But... I persevered... I gave him a bath.. in the sprinkling rain. And then there was a thunder boom or two. I put him in his stall and went to the house, changed my clothes and got ready to go. I went out to the barn and was debating on what to do. People were posting about how it was raining at Chatt and how sloppy it was. And then while I was debating it started to POUR!!! Like... it was raining so hard I couldn't even go back to the house. And I was still debating. Cindy eventually talked me into coming. She said it had stopped raining there. Although to be honest, I wasn't sure it was worth hauling in this nonsense, but... I decided she was right. I would be annoyed if I went and didn't get to ride, but I'd be more annoyed if I had stayed home (yet again) and it ended up not being bad. So.... I went. We hauled in a downpour the entire way. It was so bad that I was only going 45 mph on 285!!! Just when I got to the turn off by the McDonalds, like 15 minutes from Chatt, Cindy called and told me to turn around and go home. UGHH!!!! She said that it had started raining there and hadn't stopped and the footing was getting worse and that everyone was miserable. Sigh... At that point, all of the traffic lights were out too. So yep.. I turned around. Poor Dan. It was a good choice though. I passed two cars that had slid off the road and another wreck. And it pretty much rained the whole way home although once we got home, it had stopped. But once I got home, I got a call that they had cancelled the rest of the show at Chatt. Sigh... darnit!!! At some point, I would like to show!!! 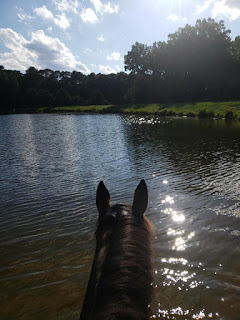 I ended up tossing the boys out and went inside and did paperwork for a little bit. Then I was looking at the radar and it kept saying it was supposed to pour. But it didn't. Sigh.. so I didn't ride.

I did sneak in a hack on Sunday. It was nothing too exciting... but it was pretty out considering how wet it was the day before. And Mike and I had a blast at the lake. I just rode afterwards, which was when it was finally slightly cool enough. 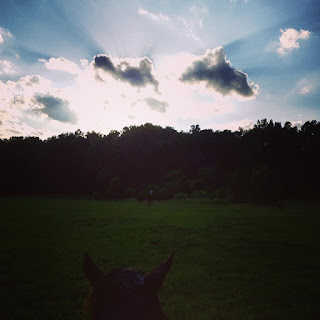 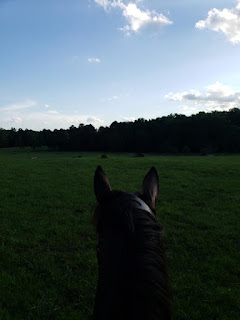 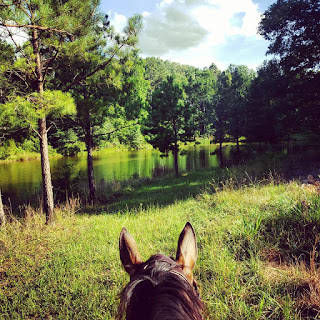